Virgin Galactic’s Spaceflight And The Power Of Grit 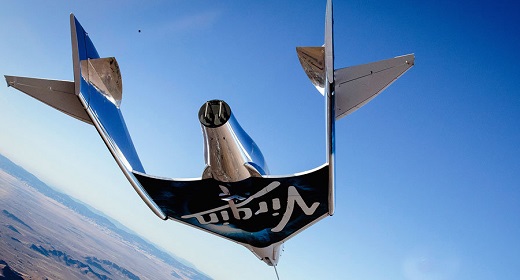 Early this week, I jumped in my plane and flew up to the Mojave Spaceport at 5am to cheer with friends and family as Virgin Galactic’s SpaceShipTwo (SS2) Unity made its first attempt to reach space.

On September 29 and October 4, 2004, SpaceShipOne (SS1), the vehicle designed by Burt Rutan and funded by Paul Allen, made two consecutive flights to an altitude of 100 kilometers to win the $10 million Ansari XPRIZE.

On the heels of that success, two things happened:

First, Sir Richard Branson and the Virgin Group came in and committed >$250 million to license the design of SS1, fund the development of SS2, and form Virgin Galactic.

Second, SS1 was hoisted into the central gallery of the Smithsonian Air & Space Museum, adjacent to the Spirit of St. Louis aircraft that inspired the XPRIZE in the first place.

With Virgin Galactic announced, ticket sales began (at $250,000 per seat), and the race to get the first commercial customers to space began in earnest.

But tragedy hit in 2014, when SS2 had a fatal accident during a test pilot flight. Undeterred (more on grit later), Branson recommitted, added more funding and, under the leadership of Virgin Galactic CEO George Whitesides, doubled down on getting the next ship, called “Unity,” into the air.

This past Thursday, I found myself back in the Mojave Desert, 14 years later, in the very same spot where we popped champagne bottles with Burt Rutan, Paul Allen, Brian Binnie (the pilot), the Ansari family, and Richard Branson. I was once again surrounded by many friends and colleagues—but this time it was their show.

The weather was perfect. At 7:11am, Unity, hung below WhiteKnightTwo, took off and climbed to about 45,000 feet, where SpaceShipTwo was released. The rocket engine fired for 60 continuous seconds, taking the vehicle and the two pilots to 51 miles (271,268 feet) before returning to Earth.

I can only imagine what it felt like for Mark “Forger” Stucky and CJ Sturckow (the two pilot-astronauts) to hear the words “welcome to space,” earning their commercial astronaut wings as they crossed the 50-mile mark.

The Power of Grit

I’ve previously shared that I believe the most important superpower an entrepreneur can possess is persistence (or grit)—not giving up, even when it seems the entire world is telling you it won’t work.

When I announced the $10 million XPRIZE under the St. Louis Arch on May 18, 1996, I didn’t have the prize money in hand. Over the next five years, I pitched over 150 potential sponsors to a chorus of “NO’s.”

As we sought to raise the funding, we suffered through the September 11 attacks in 2001 and the Columbia Shuttle disaster on February 3, 2003. In those days, the idea of raising $10 million for a private spaceflight prize seemed insane.

But grit, a refusal to give up, led me ultimately to the Ansari family, our title sponsor.

Had I thrown up my arms in the face of this adversity, or listened to the criticism, the Ansari XPRIZE wouldn’t have happened, and the idea of private spaceflight might have remained in the realm of science fiction for another decade.

But I didn’t. My passion for space, and for opening up the space frontier, wouldn’t let me quit.

This is also true for Richard Branson, George Whitesides, and the Virgin Galactic Board, who refused to give up after the 2014 crash of the original SpaceShipTwo craft.

Where in YOUR LIFE or business do you practice passion and grit—the will to keep pushing, iterating, and moving forward in the face of hardship?

All around the world, we’re witnessing the power that a single individual has to effect positive change and help create a world of abundance.

Think of how Elon Musk is pushing to transform energy and transportation, amid constant scrutiny and criticism. Or how Larry Page catalyzed a revolution in how we access information, toppling the competition and making the encyclopedia obsolete in the process.

Are you passionate enough about a moonshot to devote a decade (or more) of hard work to materialize it?

If you believe in your vision… don’t give up. Keep trying, keep testing, keep iterating, and eventually, you’ll get it right.

One Last Thing… Where Does Space Begin?

The $10 million Ansari XPRIZE required teams to fly to 100 kilometers (62.5 miles), yet the SpaceShipTwo flight this week reached space at “50 miles.” Why the difference, and where does space actually start?

You can tell a Russian aircraft to get out of US airspace, and even shoot it down if it doesn’t move. But you can’t tell a Russian satellite not to overfly the United States.

This policy decision was made very strategically in the moments following the launch of Sputnik in October 1957, and is a topic of scholarly debate.

Nonetheless, the definition of space is murky at best.

As I researched this for the Ansari XPRIZE, I learned that the U.S. Air Force gives out its pilot wings at 50 miles of altitude, and in Europe, Federation Aeronautique Internationale considered the required altitude 100 km.

From my point of view, 50 miles is just as valid as 62.5 miles—it’s all about the view and the weightless hang time.