Eating Meat Has ‘Dire’ Consequences For The Planet, Says Report

by Sarah Gibbens: To feed a growing global population and curtail climate change, scientists say we need to radically change our food systems… 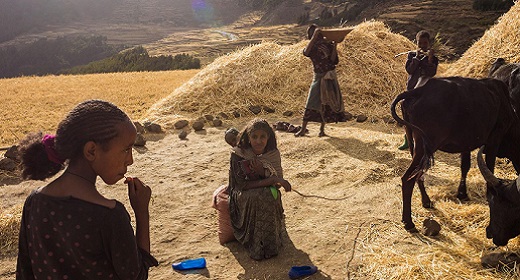 THERE’S AN ENTIRE industry built around dieting. Most of its products are intended to help people lose weight, gain muscle, or live longer.

But as the global human population steadily climbs, scientists are scrambling to devise a diet plan that can feed 10 billion people by 2050.

A new report, published in the British medical journal The Lancet, claims to do just that. It recommends a largely plant-based diet, with small, occasional allowances for meat, dairy, and sugar. The report was compiled by a group of 30 scientists from around the world who study nutrition or food policy. For three years, they deliberated with the intent of creating recommendations that could be adopted by governments to meet the challenge of feeding a growing world population.

Under the report’s conclusions, meat and sugar consumption around the world should drop by 50 percent. Who eats less meat and where will vary, says Jessica Fanzo, a report author and professor of food policy and ethics at Johns Hopkins University. Meat consumption in the U.S., for instance, would have to go down and be replaced by fruits and vegetables. But other countries already facing poor nutrition could incorporate meat into roughly three percent of their diet.

Recommendations to scale back meat consumption aren’t new. Just this past October, a study published in the journal Nature set similar guidelines for reducing meat and sugar consumption.

What’s different about this new report, says Fanzo, are the steps outlined to put such a change into place.

Branded what the authors call a “Great Food Transformation,” it outlines strategies that range from the least active, simply sharing information, to the most aggressive, eliminating consumer choice.

“I think it’s hard for people on a daily basis because the incentives and political structures that are in place don’t make it so easy,” says Fanzo. Shifting what sort of agricultural practices receive subsidies is one tactic for overhauling the food system, the report outlines. That would change the relative prices of foods, and thus build in consumer incentives.

Whether a plan like this could actually grow legs around the world is a different story, says Fanzo.

“With the current [presidential] administration, I just don’t think anything is going to move,” she notes.

Greg Miller is the chief science officer for the U.S. National Dairy Council. In addition to citing health benefits of milk like calcium and vitamin D, he cautions against transforming America’s food landscape.

“You have a million people whose lives depend on dairy,” Miller says of those who work on farms or are otherwise employed by the dairy industry.

“We could get there with the right incentives and the right policies,” Miller says of making dairy farming more sustainable. “Subsidies are needed for better technology right now. [Small-scale farmers] don’t have additional income to do some of the things that could be done.”

Better breeding has created cows that are capable of producing more milk for instance, and better tracking systems can monitor an animal’s food intake and activity.

Not all experts are convinced that plant-based diets are a food security panacea. Frank Mitloehner, an animal scientist from the University of California, Davis has been vocal about his view that meat has been disproportionately linked to climate change emissions.

According to the EPA, burning fossil fuels for industry, electricity, and transportation comprises the bulk of greenhouse gas emissions. Agriculture is nine percent of emissions and livestock roughly four percent of that.

Mitloehner also disagrees with the method used by the council to determine the amount of greenhouse gases produced by livestock, saying too much weight was given to methane during calculations. Compared to carbon, methane stays in the atmosphere for a relatively short amount of time. Scientists debate how long exactly, but studies have shown methane plays a large roll in warming oceans.

Though the report’s dietary guidelines are receiving criticism, its push to reduce food wasteis being more widely received. In the U.S. alone, nearly30 percentof all food is wasted.

Strategies to reduce waste are outlined for both consumers and producers in the report. Better storage technology and contamination spotting could help businesses reduce the amount of food that’s thrown out, but educating consumers is also touted as an effective strategy.

It’s a daunting prospect for many—changing eating habits and reducing food waste. But Kathryn Kellogg, author of the book 101 Ways to Go Zero Waste, says she gets by with just $250 a month.

“There’s so many creative ways to use our food to prevent waste, and I feel like most people just don’t know about them,” she says. She cites knowing how to cook each part of a vegetable and being constantly aware of the food in her fridge as some of her most effective habits. (Learn more about so-called zero-waste families.)

Kellogg, however, lives in California near neighborhoods with accessible farmers markets. For other communities living in so-called food deserts—regions where grocery stores or markets aren’t readily available—accessing fresh fruits and vegetables can be more difficult.

“All the actions we recommend are available now,” says Fanzo. “They’re not ‘pie in the sky’ future technologies. They’re just not done at a large scale.”

“Even small increases in the consumption of red meat or dairy foods would make this goal difficult or impossible to achieve,” a summary of the report states.

The report’s authors reached their conclusions by weighing different side-effects of food production. They included greenhouse gases, water and crop use, nitrogen or phosphorous from fertilizers, and the potential for biodiversity to take a hit should a region be converted into farmland. By managing all these factors, the report’s authors say climate change-inducing gases could be reduced and enough land could be reserved to feed the world’s growing population.

The report’s commissioners will hold launch events in more than 30 countries around the world starting Thursday. They plan to appeal to international organizations like the U.N. as potential enforcers of their new guidelines.