Juice fasts, formerly relegated to groups on the fringes of society, are now embraced by mainstream culture… 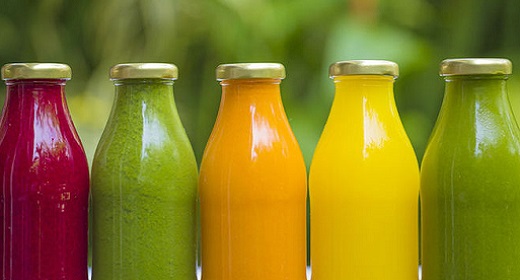 Once only a ritual rite of passage for those embedded in natural medicine circles, juice fasts have now become ubiquitous, marketed by health gurus, infomercials, and integrative medical doctors alike.

Despite an abundance of anecdotal evidence and the testimonies of countless juicingenthusiasts, well-designed controlled studies on the subject have remained scant (1).

The gut microbiota, or the one hundred trillion commensal bacteria that inhabit our gastrointestinal tracts, may be the vehicle through which juice fasts elicit their beneficial effects. Not only is a disturbed microbiota implicated in the pathogenesis of obesity and metabolic disorders, but weight reduction has been reported to engender improvements in levels of bacterial species that contribute to inflammatory processes (2). In particular, “Obesity is associated with lower bacterial diversity, phylum and genus-level changes, and altered representation of bacterial genes and metabolic pathways involved in nutrient harvest” (2, p. 394).

One study performed by Remely and colleagues (2015) examined the effects of a traditional diet in an Austrian monastery, comprised of small amounts of soup, cereal, fruit and vegetable juices, and herbal teas (2). This intervention, implemented in obese subjects, significantly increased microbial diversity as well as numbers of Bifidobacteria, Akkermansia, and Faecalibacterium prausnitzii. Mucin-degrading Akkermansia, which have high mucosal adherence and are correlated with a healthy gut microbial community, are depleted in inflammatory disorders such as Crohn’s disease and ulcerative colitis (3, 4).

The researchers also reported that populations of Enterobacteria and Lactobacilli associated with inflammation declined after the intervention (2). The authors concluded, “Our results show that caloric restriction affects the gut microbiota by proliferating mucin-degrading microbial subpopulations,” demonstrating that juice fasts may operate through this mechanism (p. 394). Other models of caloric restriction have similarly yielded decreases in Streptococcacae, which incite mild inflammation, and increases in Lactobacillus species, which competitively inhibit pathogens and produce declines in inflammatory cytokine levels (5).

Fruits and vegetables represent the richest reservoir of phenolic compounds, which resist absorption in the small intestine and instead are metabolized by the colonic bacteria into compounds which modulate populations of gut flora. Researchers speculate that the microbiota may be a previously under-recognized avenue through which polyphenolspromote health, improve metabolic parameters, and mitigate inflammation (6).

For instance, when rats are given quercetin, a flavonoid found in plant foods such as apples and onions, microbial dysbiosis induced by a high-fat high-sucrose diet is inhibited (7, 8). The rats in this experiment likewise exhibited suppressed growth of bacterial species correlated with diet-induced obesity, such as Erysipelotrichaceae, Eubacterium cylindroides, and Bacillus, alongside an attenuated ratio of Firmicutes to Bacteroidetes (7). Further, when administered in concert, quercetin and trans-resveratrol prevented weight gain in a rodent model, whereas individually, they each improved insulin resistance (7). In isolation, supplementation with trans-resveratrol also modified expression of tight-junction proteins and inflammatory gene profiles, influencing intestinal permeability in ways likely mediated by the microbiota (7).

In another study, mice receiving Concord grape polyphenols with a high-fat diet exhibited improved profiles of glucose tolerance, adiposity, and weight gain, and had enhanced expression of fasting-induced adipocyte factor, which restricts triglyceride storage (6). The mice receiving grape polyphenols similarly displayed reduced levels of inflammatory markers, such as the inflammatory cytokines tumor necrosis factor (TNF)-α and interleukin (IL)-6, the endotoxin released from gram-negative bacteria called lipopolysaccharide (LPS), and inducible nitric oxide synthase (iNOS) (6). In addition, grape polyphenols improved intestinal barrier function by up-regulating the genes for occludin and proglucagon, the former of which is a tight junction architectural protein, and the latter of which is a precursor to proteins that maintain mucosal barrier integrity and promote insulin production (6).

Importantly, grape polyphenols induced dramatic alterations in the community of commensal microbes. This botanical reduced the ratio of Firmicutes and Bacteroidetes, which is significant since an increased ratio of Firmicutes to Bacteroidetes, which is induced by a high-fat, high sugar diet, has been shown to increase host adiposity when transplanted into germ-free mice (9, 10, 11). The grape polyphenols also significantly augmented populations of Akkermansia muciniphila, an obligate anaerobic species which blooms after gastric bypass surgery and promotes weight loss when transplanted into germ-free recipients (11, 12). In addition, cross-sectional studies have underscored that higher levels of A. municiphila appear in lean individuals relative to obese individuals (13). Because A. muciniphila is vulnerable to reactive oxygen species, the free radical scavenging capacity of grape polyphenols can create a more hospitable environment for this species and other obligate anaerobes that benefit health (6).

Other studies have elucidated that dealcoholized red wine polyphenols and cocoa-derived flavanols elicit similar effects on the gut microbiota (15). Collectively, polyphenols “modulate the human gut microbiota by decreasing the abundance of Firmicutes and increasing Bifidobacteria, Lactobacillus and Verrucomicrobia, which is also a key difference in the gut microbiota found in obese and lean individuals” (15, p.1).

Based on the aforementioned findings, researchers suggest that myriad distinct polyphenols and bioactive compounds may exert similar effects, both directly and indirectly, on the gut microbiome. They propose that diverse classes of dietary antioxidants may engender health benefits by conferring a survival advantage for certain commensal species (6). According to Roopchand and colleagues (2015), “We propose that this altered gut microbiota is, in part, responsible for the altered intestinal gene expression, epithelial integrity, and inflammatory markers, which then leads to decreased fat deposition and glucose absorption, along with increased insulin secretion” (6, p. 2857).

Changes in Gut Microbiota After a Juice Fast

Based on the premise that changes in microbial composition influence health, researchers designed a study to examine whether a three-day juice fast, followed by reversion to a customary diet for two weeks, would favorably influence the microbiota composition of twenty healthy subjects with low fruit and vegetable consumption (15). A root juice mix was blended from beet, apple, ginger, and lemon, whereas a citrus juice mix consisted of apple, pineapple, mint, and lemon, and the green juice mixes contained romaine lettuce, apple, cucumber, celery, lemon, and small fractions of kale, parsley, and spinach (15). Also included was a mix consisting of filtered water, lemon, cayenne, almond, vanilla bean, dates, and sea salt (15).

Whereas proportions of certain intestinal bacteria, such as Fusobacteria, Actinobacteria, Verrucomicrobia, and Proteobacteria remained consistent, a significant decrease in Firmicutes and increases in both Cyanobacteria and Bacteroidetes were observed in subjects undergoing the juice fast compared to baseline (15). Firmicutes and Bacteroidetes represent the two most abundant bacterial phyla in human populations, representing 40-60% and 20-40% of the microbiota, respectively (16).

Increased Firmicutes in relation to Bacteroidetes has been correlated with obesity and body mass index (BMI) in some human studies (17). According to researchers, “Comparisons of the distal gut microbiota of genetically obese mice and their lean littermates, as well as those of obese and lean human volunteers have revealed that obesity is associated with changes in the relative abundance of the two dominant bacterial divisions, the Bacteroidetes and the Firmicutes” (18, p.1027). The microbiome characteristic of the obese phenotype, in turn, has been correlated with increased harvesting of energy from the diet, and produces obesity when germ-free mice are colonized with the obese microbiota (18).

This trend, which has been supported by some studies and refuted by others, was reinforced by the present juice fast, where a significant positive correlation between weight at day four and Firmicutes proportion, and a significant negative correlation between weight at day four and Bacteroidetes proportion was observed (13, 15, 18). These changes in microbiota may mitigate or perpetuate metabolic syndrome features by regulating gut barrier function, as animal models have confirmed that a compromised gut barrier enables translocation of bacteria and antigens, which evokes inflammation from the gut-associated sub-mucosal lymphoid system (13).

In addition, Bacteroides species such as B. ovatus, B. thetaiotaomicron, and B. uniformis can ferment a wide array of indigestible complex polysaccharides, such as fruit- and vegetable-based xylan and pectin (19). These carbohydrates serve as fermentable substrates or prebiotics, which are metabolized into health promoting, gut sealing, cardioprotective short chain fatty acids. According to Flint and colleagues (2012), “Certain dominant species, notably among the Bacteroidetes, are known to possess very large numbers of genes that encode carbohydrate active enzymes and can switch readily between different energy sources in the gut depending on availability” (19, p. 289). The enrichment in Bacteroides species after the juice fast reinforces the prebiotic effects of juice, since similar increases in Bacteroides species such as B. acidifaciens, B. ovatus, and B. xylanisolvens were witnessed in studies of subjects with metabolic syndrome who included resistant starch in their diets (20).

In one particular study, flourishing of Bacteroides species was accompanied by significant decreases in fasting glucose, glycosylated hemoglobin, cholesterol levels, body fat, waist circumference, and pro-inflammatory markers, which speaks to the metabolic benefits incurred with strategies that augment Bacteroides populations (20). In addition, another rodent study showed that B. thetaiotaomicron combined with probiotics decreased mean body weight and reduced levels of postprandial triglycerides in rats fed a high fat diet, further illustrating the benefit of these specific microbes (21).

After the juice fast, populations of Bacteroides, Odoribacteri, Paraprevotella, Barnesiella, and Halospirulina were all enhanced at day four compared to baseline, whereas Eisenbergiella, Dialister, Ruminiclostridium, Subdoligranulum, and Streptococcus were all suppressed at day four compared to baseline, illuminating the immediate and dramatic effect that fruit and vegetable polyphenols can elicit on the microbiota (15). These other genera, however, besides Streptococcus, returned to baseline levels at day seventeen, indicating the need for regular polyphenol consumption to maintain favorable microbiome changes (15).

Effect of a Juice Fast on Inflammation

Although plasma antioxidant capacity remained unchanged after the juice fast, lipid peroxidation, as measured by urine malondialdehyde (MDA), significantly decreased by 40% at day four compared to baseline (15). The researchers attribute this to either the low-fat nature of the juice fast, such that fewer lipids are available for oxidative degradation, or the antioxidant protection conferred by juice polyphenols for lipids during digestion (15).

This latter hypothesis is supported by research demonstrating that polyphenol-rich juices containing cyanidin glycosides and epigallocatechin gallate (EGCG) supplemented for two weeks led to decreases in plasma MDA (22). In addition, red wine polyphenols have been shown to completely prevent the rise in plasma MDA that occurs due to oxidized fats (23). Similarly, rosmarinic acid, a polyphenol in oregano, significantly reduces MDA concentration in plasma and urine after burger consumption (24). Thus, the high polyphenol content in juices may protect against the carcinogenic and atherosclerotic effects of lipid peroxidation.

In addition, after the juice fast, day four nitric oxide (NO) concentrations were increased by five-fold and three-fold, in urine and plasma, respectively, compared to baseline, indicating the vasodilatory effect of fruit and vegetable nitrate content (15). Optimizing NO levels may prevent cardiovascular disease, since disturbed activity of endothelial nitric oxide synthase (eNOS) is implicated in the pathophysiology of endothelial dysfunction, impaired arterial compliance, and hypertension. This is consistent with prior work which elucidated that nitrate-rich beet juice improves vascular function in hypercholesterolemic patients, as illustrated by increases in flow-mediated dilatation (FMD) and aortic pulse wave velocity and by decreases in platelet-monocyte aggregates compared to placebo (25). These changes may also be mediated by the microbiome, and nitrate-reducing bacteria specifically, since in one study, nitrate treatment modified the proportions of 78 bacterial taxa in the salivary microbiome compared to placebo (25).

Lastly, during the juice intervention, significant decreases in body weight and body mass index (BMI) occurred which persisted after the two-week follow-up period (15). Well-being scores remained consistent with baseline at day three, but there was a significant increase in well-being at the conclusion of the study (15). However, both NO and MDA concentrations returned to initial baseline values at day seventeen, suggesting that continued consumption of polyphenols is required to maintain anti-inflammatory benefits (15).

Although the fiber is largely removed from juice, this study highlights that juicing still elicits a prebiotic effect due to its polyphenol content, and that it can therefore favorably modify the microbiome by selectively stimulating the growth of beneficial commensal bacteria. Thus, juicing, with an emphasis on lower glycemic vegetables, may be both a prudent adjunctive strategy for people with gastrointestinal distress who cannot tolerate large quantities of fiber, and for individuals with metabolic derangements.