by Amanda L. Chan: When it comes to heart health, the No. 1 dietary approach is the Ornish Diet, according to a ranking of 25 diets by U.S. News and World Report released this week… 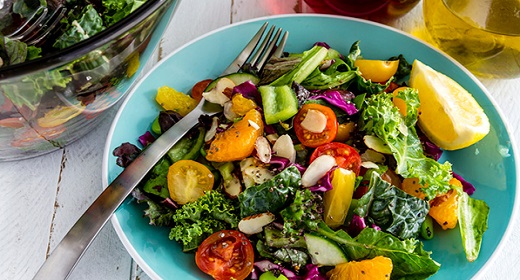 In its second-ever ranking, U.S. News commissioned a panel of 22 weight loss and nutrition experts to evaluate popular diets based on a series of criteria, including the ability to prevent and manage heart disease. (To see more on U.S. News‘ diet rankings, check out HuffPost’s coverage of the Dash Diet, which was ranked the number one overall best diet, and the full list of the easiest diets to follow).

We talked to Dean Ornish, M.D., the developer of the Ornish Diet and HuffPost’s medical editor, who showed that heart disease is reversible by making comprehensive lifestyle changes, including a healthy diet, stress management techniques, moderate exercise and psychosocial support.

“In more than 35 years of scientific research, we found this diet and lifestyle program could reverse the progression of even severe coronary heart disease,” Ornish explained to HuffPost.

Because of this, Medicare is now covering “Dr. Ornish’s Program for Reversing Heart Disease,” the first time that Medicare has covered an integrative medicine program.

Today, there are more than 27 million adults with heart disease in the United States, which comprises 11.8 percent of the population, according to the Centers for Disease Control and Prevention.

And Ornish said his diet can help with more than heart disease, as well, explaining that research has found it can also reverse Type 2 diabetes and pre-diabetes, which is affecting almost half of Americans.

Another study showed that the Ornish diet and lifestyle program also may slow, stop or even reverse the progression of early-stage prostate cancer.

The Ornish program affects gene expression — turning on genes that prevent disease and turning off genes that promote breast cancer, prostate cancer, colon cancer, and heart disease. Over 500 genes were beneficially affected in only three months.

Ornish also directed a study with Nobel Prize winner Dr. Elizabeth Blackburn that showed the Ornish diet and lifestyle method increases telomerase by nearly 30 percent in three months. (Telomerase is an enzyme that repairs and lengthens telomeres, the ends of our chromosomes that control how long we live.)

“Our genes are a predisposition, but our genes are not our fate,” Ornish explained. “Some people think, ‘Oh, I have bad genes, there’s nothing I can do,’ what I call ‘genetic nihilism.’ They often become inspired to know that there’s a lot they can do — not to blame, but to empower.”

But for people who don’t have to go on a diet for a serious health condition, they can also utilize the “spectrum” aspect of the diet, which is not like a traditional diet where you go on and then, most likely, go off.

The “spectrum” approach is “a more compassionate approach, because you can’t fail,” Ornish said. “What matters most is your overall way of eating and living. If you indulge yourself one day, it doesn’t mean you failed or got off the diet, just eat healthier the next. If you don’t have time to exercise one day, do a little more the next.”

In all of his research studies, Dr. Ornish found that the more people changed their diet and lifestyle, the more their health improved. Based on this finding, instead of saying “eat this” and “don’t eat that,” he categorized foods from the most healthful (Group 1) to the least healthful (Group 5).

Ornish, who is the founder and president of the nonprofit Preventive Medicine Research Institute, and clinical professor of medicine at the University of California, San Francisco, explained that most healthful foods include vegetables, fruits, whole grains, legumes and soy products, while least-healthful foods include red meat, deep-fried foods and trans-fats.

“So, let’s say you want to lose weight or reduce your cholesterol, blood pressure, or blood sugar. You decide how much you want to change your diet and lifestyle and how quickly. If you’re eating mostly unhealthy Group 4 and 5 foods, eat more foods from Groups 1 and 3. If that degree of change is enough to accomplish your goals, great, you’re there. If not, just make bigger changes.”

And unlike some other diets that only look at food and nutrition, Ornish’s system also places an emphasis on regular exercise, yoga and meditation, as well as love and social support.

“Diet is important, but we have to work at a deeper level,” Ornish said. “The real epidemic isn’t just heart disease or diabetes, it’s loneliness and depression. When we work at that level, we find that people are more likely to make lifestyle changes that are life-enhancing than self-destructive. We help people use the experience of suffering as a doorway for transforming their lives for the better. It’s a conspiracy of love.