Taking The Initiative In 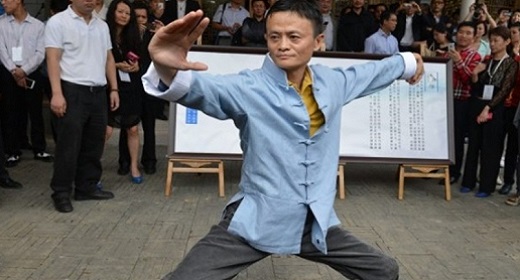 “You must act according to your opponent, not try to do things from yourself, for if you go along with your opponent, you can act spontaneously, but if you act from yourself, you will get bogged down.” and “If he takes no action, I take no action, but once he takes even the slightest action, I have already acted.” The Taijiquan classic attributed to Yang Banhou (楊班侯) says “The basic of basics is to forget about your plans and simply respond to the opponent.”

These sayings (all as translated by Paul Brennan) emphasize the predominately counter-attacking approach of Taijiquan. But does this mean that practitioners cannot initiate actions against an opponent, and that they must wait until the opponent attacks?

In many conflicts the aggressor has an advantage since the opponent needs to be able to understand the attack and then respond. The aggressor already knows their intent, but there is a delay for the recipient since they usually cannot determine what the aggressor intends until after the aggressor initiates their attack. This delay is what Taijiquan trains to eliminate.

We want to know what the opponent intends, but not let them know our plans. By allowing the opponent to initiate the action, we can gain information about their intent. By “forgetting about your plans” the opponent cannot read or understand our intent.

“Borrowing force” is commonly practiced in Taijiquan. We want to use the opponent’s actions to defeat them, emphasizing responding to the opponent rather than initiating actions ourselves. This is accomplished through “sticking.” In order to use Taijiquan’s principle of stick and adhere, connect and follow (zhan nian lian sui 粘黏連隨) we typically want to be in contact with the opponent. Can we induce contact, or must we await an advance from the opponent before we can touch them?

What about when we are using weapons where contact is often broken? In the weapons sparring that I learned, in choreographed sparring sets, drills and free sparring, we are often separated, and we frequently attack openings even when we are not in contact with the opponent’s weapon. How then does this remain compatible with Taijiquan strategy?

There are several ways to approach these questions.

My understanding is that there are ways to interact with an opponent that do not require the opponent to initiate the actions. For example, there are sayings that refer to having simultaneously true and false attacks. We want an attack to be real, yet be able to change it into a feint, depending on the opponent’s response. This means that we attack an opening or weak area of the opponent, but when they change to respond, we can abandon our attack and change to respond to their new actions. Initiating an attack in this way can be used to connect with the opponent when they respond.

Some schools refer to the interactions of push-hands (推手 tui shou) training as being like a question and answer conversation. You supply energy (an attack or feint) towards your partner (the “question”), and listen for their response (their “answer”). Your follow-up action would depend on theirs, continuing the attack if their response is wrong or, if their response is correct, changing your action in order to “ask” another question or to respond to their counter (their “question”). The person that “asks” is initiating the interaction, but what happens afterwards depends on the partner’s response (“answer”).

This type of interplay reflects the simultaneous true and false attack because the follow-up depends on how the opponent responds to the initial attack. However, it does not require that one only respond (“answer”) without ever initiating (“asking”).

Some schools train to continually flow towards the opponent’s spine when attacking, like a river flowing to the ocean. Using this approach, the goal is to control the opponent’s spine as a way of controlling their stability and movements. Any blocking by the opponent is like an obstacle in the way of the water’s movement, and should be flowed around, over washed, undercut, or worn away. This is another way of maintaining a responsive initiative during an interaction.

Another quote from Wu Yuxiang (Brennan translation) is “If an opportunity comes from yourself, go ahead and shoot, but when force comes from your opponent, borrow it.” Here “shoot” likely refers to the Taijiquan principle of storing energy like drawing a bow, and then releasing the energy like shooting the arrow, and probably means, in general, to attack. This quote seems to indicate that, though it may be desirable to have the opponent move first in order to have them commit to some action that is then used against them (borrowing their force), it is not a requirement; we can still attack on our own initiative.

Those who have faced a quality modern boxing jab know how difficult it is to stick and adhere, connect and follow when the jab and the return to the guard position are both so fast. But boxing blocks are relatively stationary, especially when they are of the covering type. This means that when they initiate their attacks using a jab, they are very difficult to connect and adhere to, but when we initiate an attack from non-contact, their defense often allows us to connect with them. Once we contact the opponent, we can employ the skills that are typically trained in push-hands practice, for as long as we maintain the contact.

As long as we do not over-commit to our attack, and we maintain our changeability, our initiation of the interaction should be able to follow Taijiquan strategy. We can maintain our relaxed sensitivity and our ability to understand our opponent. The quality of the contact should not be crashing in (or banging against, etc.) unless they fail to properly defend, but should instead be able to match the energy of the opponent when they make defensive contact.

We want the potential, on contact, to either absorb or project, pull or push, expand or contract, to be able to express energy in any direction, and when we listen to and understand what is happening at the point of contact, then we will be able to act appropriately, regardless of which direction or which energy is called for. This should remain true even when we initiate the contact. 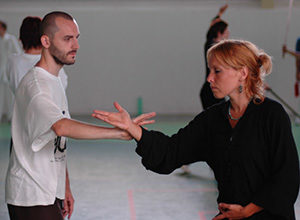 Yaxuan (李雅轩) wrote (as translated by Scott Meredith): “Even before physical contact, with a single glance you join contact with the opponent or partner, establishing a firm connection with him. Adherence can begin even at this stage, prior to physical contact. This is important because when you are working in a more intensive competitive or combative mode, if you depend on physical contact to start your adherence, that’s too late and you’re going to be too slow to exploit any advantage of timing or positioning.”

This indicates that we should already engage with our opponent prior to touching them. We should understand their posture, distance, movements, intent, etc, even prior to contact. We can already follow their movements, attempting to control the distance, and seeking advantageous angles. In a sense this is “stick and adhere, connect and follow” even without contact.

we already have “stick and adhere, connect and follow” prior to contact, then the idea behind initiating an attack from non-contact is similar to counter-attacking from contact. However, a strength of Taijiquan is using skills typically acquired through from-contact push-hands training. We should be able to understand our opponent’s intent better when in contact with them, rather than relying mainly on sight.

Yang Chengfu (楊澄甫) expressed an approach to dealing with fast attacks from opponents in his 1931 book (as translated by Paul Brennan): “If the opponent attacks slowly, then soften, neutralize, and follow him. This principle makes sense to you all. But if he attacks very fast, what good would softening and neutralizing be? Thus I apply Taiji’s intercepting energy and the principle of “neither after nor before” as a response. What is the intercepting energy? It is like a hiding army suddenly coming out to strike. What does neither after nor before mean? If his hand is on its way but not yet arrived, my hand intercepts his arm before it has straightened, promptly dispelling his attack. This is defeating a frontal assault by way of a frontal assault. ‘If he moves fast, I quickly respond.’”

Although intercepting is not initiating the attack (it is attacking the opponent’s attack), it can be used from non-contact. This would be one strategy for dealing with a boxing jab. By intercepting the jabbing arm before the fist arrives, their attack is dispelled. With training, intercepting can be used not only to disrupt the opponent’s attack, but can also affect their structure and capture their balance. While intercepting is not a primary Taijiquan strategy, it is not uncommon, especially in weapons sparring where fast interactions are frequently initiated from non-contact.

Yang Chengfu also wrote (Brennan translation): “If the opponent jumps away and is too wary to come back right away, I switch to a different posture from the solo set and wait for him. I should not pursue his retreat but instead be like a tiger waiting for its chance to pounce on a deer. While he walks at circle’s edge, I am at the center. I hold to steadiness while he holds to restlessness. When his restlessness increases until he wears himself out, I attack him with full stability. He has thus generated the means for me to overcome him, and he now presents no difficulty and I enter through his guard. This is the Grand Polarity [tai ji] generating its two polarities which exponentiate into the four manifestations and the eight trigrams while itself remaining stable and immovable.”

This gives another approach to dealing with an opponent who is beyond contact range. It is unclear what he means by “I attack him with full stability,” but here he does not mention the opponent attacking first (“be like a tiger waiting for its chance to pounce on a deer”), rather the opponent appears to “wear himself out” while outside of contact range which then allows an attack initiated by the Taijiquan practitioner. I interpret “full stability” to mean being centered and capable of using any of Taijiquan’s thirteen postures/energies (十三式 shi san shi).