by Doreen Virtue: A healthy relationship is one in which each person is free to be honest with the other, in loving ways. 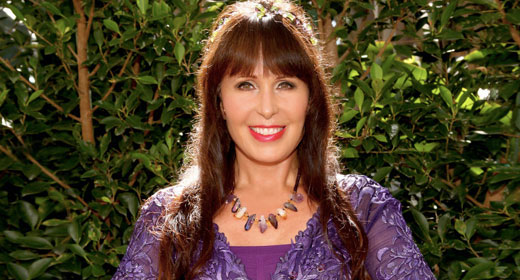 Earth Angels float above their physical selves like a helium balloon on a string. They’re blissfully unaware of how their bodies feel or how their emotions are doing, because they’re up in the ethers with God and the celestial angels.

While it feels great to have your head in the clouds, this could be a distraction from your earthly life purpose. You’re in a human physical body for a reason, and it’s important that earth Angels learn how to put their focus and consciousness into their bodies. You can ground yourself by spending time outdoors in nature, especially by going barefoot and touching the soil, sand, or grass. You can also do so by simply surrounding yourself with trees and plants.

Eating vegetables can help you get grounded, including potatoes, radishes, turnips, onions, and other bulb vegetables. They grow in the ground, so they ground you when you eat them. Just make sure that they’re organic and non–genetically modified (GMO-free). You can also ground your awareness by touching your feet or even better, getting a foot rub, pedicure, or session of reflexology.

As an earth Angel, you’re naturally loving and kind. Being honest is a part of that loving and kind nature. It shows that you care enough about the person in the relationship to keep it long-lasting and healthy. In business relationships, being honest earns you respect. Honest people are viewed as strong contenders for advancement in the business world. Your genuineness is a sign that you have substance and strength, which is what healthy organizations seek in their employees. And you’ll be much happier working for a healthy organization

Honesty is part of being a good and loving friend. It’s important to be gentle yet firm while being honest. What this means is that your tone of voice is melodic and sweet, without tension in your throat or inflection. But at the same time, you’re clear and steady, such as looking the other person in the eye directly.

Come across as friendly, but also be sincere. If you’re angry, it’s okay to show it. You’re human, with human emotions. When you’re real, other people trust you more because they can tell that your words match your energy.

Most earth Angels are terrified of their own anger. They’re afraid that they’ll lose control if they finally unleash their hidden anger. But actually, releasing it a bit at a time is similar to letting the air out of the balloon slowly. You have more control when you don’t have pent-up anger inside of you. Be honest with the other person, without trying to control or manipulate him or her to react in a certain way. Tell it like it is and let the chips fall where they may. If people react with anger, those are their feelings, and they have a right to their feelings. Now, what they do with their anger is a whole different story. You never have to take others’ abusive words or behavior! It doesn’t matter what your relationship is, or how much you need them in your life. If they’re yelling at you, name-calling, or threatening you in any way, walk away.

3. Pay Attention to the Red Flags

The angels will always protect you from entering toxic relationships, provided that you pay attention to the signs they send to you. If you don’t listen, you’ll end up in a toxic or even abusive relationship. In relationships, these signs are called red flags, which are cautionary messages you receive from your intuition, your body’s signals, and your angels.

When you meet someone new, your stomach will tell you immediately about the energy of the person and of the potential relationship. Always pay attention to what your stomach does in the presence of another person, because it will tell you the truth. That’s why they say to trust your gut. If your stomach muscles tighten, it’s a sign that you’re stressed in that person’s presence. It can also mean that the other person is stressed around you, and you’re picking up on his or her tension. Either way, you’re feeling tension, and that’s something to consider when deciding whether or not to move forward with this relationship. Next, watch the person’s actions and listen to his or her words. Notice any signs that he or she is lying to others and bragging about how he or she got away with something, or any other exhibition of unethical tendencies.

Watch for any talk of racism or racist jokes. Also, notice if the person gossips about mutual friends or puts people down in unkind ways. Yes, it might be amusing to engage in gossip about others or laugh at them behind their backs. But know that this person will also be trash talking and gossiping about you. Every time your stomach gets tense, that’s one red flag. With each new person, you’ll want to be conscious of these red flags before you completely open yourself up to him or her. If you get red-flag warnings about someone’s character, that’s your angels’ way of protecting you. The angels are trying to steer you away from that relationship.

Sometimes you might be saying things to people that they don’t want to hear. And you, as an intuitive earth Angel, know that this isn’t what they want to hear. You may react to that person’s anger or disappointment as you’re honest with them. You may even consider backing down from your opinion. This is where practice is needed to develop the inner strength to stand your ground.

Of course, as an earth Angel, you’ll listen to others’ opinions, too. You’ll give them the respect that you want for yourself, but watch out for the trap that sensitive people sometimes fall into where they silence their opinions and feelings because the other person gets louder.

Don’t cave in just because someone gets loud or in your face with their opinions. Don’t engage in a power struggle, either. Very often, power struggles arise because of one person’s need for attention and validation. You can defuse a power struggle by making your own power so large that the other person feels it unconsciously, and backs down. You can enlarge your energy by breathing deeply, and on each inhalation feel yourself drawing power up from the core of the earth, through the bottoms of your feet and up into your body. Visualize your energy and power being enormously large, and the other person will back down.

5. Define Your Own Self

Don’t allow others to define you. Another person’s opinion about you is just that: an opinion. It doesn’t matter how often someone states it, or how loudly. It’s still an opinion and not fact. If disparaging or mean things are being said to you, that’s a form of abuse. No one has the right to call you names, tell you what you can or can’t do, or make you feel bad about yourself. There are some people who are incapable of giving approval or the amount of love that an earth Angel needs and deserves. Pray for that person, but don’t waste your valuable earthly time hanging out with him or her.

For more in-depth discussion of this topic see my book, Assertiveness for Earth Angels.