by Barbara Marx Hubbard: We are facing, as Bruce Lipton and Deepak Chopra recently wrote, the possibility of the collapse of our life support system… 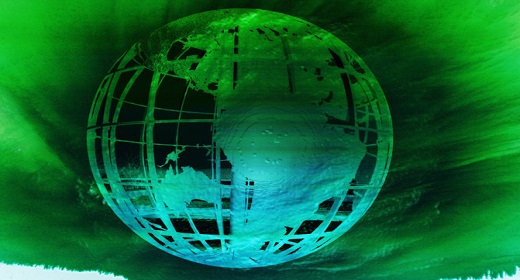 Or, I believe, the emergence of something new, something better than we have ever known before.

Evolution is evolving from unconscious chance to conscious choice. We are entering the first age of conscious evolution.

Why? Because we obviously affect our own evolution by all the choices we make — from the food we eat, the number of babies we have, the cars we drive and the weapons we build.

Humans have no experience at being responsible for global change at this level. We are facing, as Bruce Lipton and Deepak Chopra recently wrote, the possibility of the collapse of our life support system. Or, I believe, the emergence of something new, something better than we have ever known before.

This shift in evolution began overtly in 1945 when the United States dropped the first atomic bombs on Japan. The signal went out to the world: We now have the power to destroy life on Earth. I was 15 years old. I could see at that time that self-conscious humans, in top-down competitive structures such as nation states, organized religion and global corporations, could not handle this degree of power. We had suddenly gained capacities we used to attribute to our gods. We can blow up worlds, and we can build new worlds in space. We can travel with the speed of light by image; we can create new life forms or destroy our life; we can tap into immense energy or run out of energy.

I began to ask a great question: What is the meaning of our new powers in science and technology that are good, and what are positive images of the future that are equal to our new powers?

I read religion and philosophy as a young girl and found that no one knew the answer. The powers were so new.

I went to Bryn Mawr College and found I could not even ask the question there. There were no subjects on it. My father used to say to me, “Barbara, you are the best in the field… but there is no field!” I went to Paris in 1947 to study at the Ecole des Sciences Politiques. Despair and a sense of the absurdity of life were rampant in Paris after two world wars and the bomb. One day I was having lunch on the Left Bank, and a handsome American walked in and sat down next to me. I asked him my question: “What do you think is the meaning of this new power that is good?” and he responded, “I am an artist, and I am seeking a new image of man commensurate with our powers to shape the future.”

The idea crossed my mind, “I’m going to marry you!” And I did. He told me that when a culture loses its story and its image of the future, it declines. We had clearly lost our story of progress, and the image of humans now portrayed in the arts and theater was of a disintegrating destructive force. Yet I had innate hope and had to find out what I was hopeful about.

I went to see President Eisenhower in 1952, just after he became president. My father was an old colleague of the president. I was taken into the Oval Office. He greeted me kindly: “What can I do for you young lady?”

“Mr. President,” I said, “I have a question: What do you think is the meaning of all our new power that is good?” He looked startled, shook his head and said, “I have no idea.” So it flashed in my mind, “Well, we better find out!” This has been my life quest, and I believe just now we are discovering the proper response. We do have a new story. It is the universe story. When we place ourselves in this 13.7 billion-universe story we discover the pattern and an evolutionary process of action we can do. We see that our crises are comparable to past evolutionary shift points. The only difference is now we are conscious that we are causing our own extinction. This is what I call “conscious evolution” — the greatest wake up call we have ever had for the human species to grow up! Here are some lessons we can learn and apply to our own situation:

What do we need to do right now? I believe it is time to rapidly connect what is working in every field and function and communicate through all media as fast as we can our creativity, innovations and capacities to make it through together. We should be calling upon each other, everyone on earth, to know that they have a part in this “birth.” Each of us is given an impulse of evolution within, a heart’s desire to realize our greater potential. Wherever we are, whatever our situation, we are capable of “giving a gift to the shift,” from one phase of evolution to the next. In 1984, I ran an idea campaign for a “Positive Future” for the vice presidency on the Democratic ticket. I proposed a “peace room” as sophisticated as a war room in the office of the VP to scan for, map, connect and communicate what is working. I was actually the other woman along with Geraldine Ferraro whose name was placed in nomination. In my speech.

I shared, “It is now in our capacity to destroy civilization as we know it, or to build a world of unprecedented opportunity for all people.”

What we need now is a “peace room” or a “synergy center,” a new social function to connect the positive in time.

Dec. 22, 2012, has been selected as day one to consciously contribute to this process. It is our first Planetary Birth Day to celebrate the coming of the next era of evolution based on what works.

Birth 2012 has been initiated and will be produced by The Shift Network as a convergence of what is working; we will celebrate human creativity and call for the greatest experience of mass coherence and compassion the world has ever known. We will connect with positive innovations, projects, people, artists and musicians — every way we can to converge and emerge together as a newly-born planetary species.