The Practice Of Indigenous Alchemy

by Dr. Alberto Villoldo: The Practice of Indigenous Alchemy is the fourth lesson in The Way of the Sage… 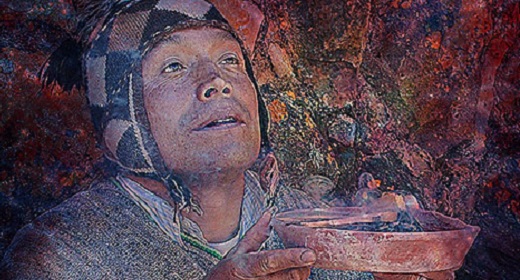 the last of The Four Insights—wisdom teachings long protected by secret societies of Earthkeepers.

The Laika are keen observers of nature. They take notice of how the beehive and the anthill behave like a single organism with many independent parts. They observe how ants farm fungus in their hollows, and how bees manage to communicate the location of flowers to each other through an intricate aerial dance. They understand that the survival needs of a bee can best be met at a higher level by the hive, and the wellbeing of an ant can best be assured by its colony. To the Earthkeepers, the beehive and ant colony are simply examples of indigenous alchemy, of how life seeks higher levels of order and complexity by creating these collective beings we know as anthills and beehives.

When a Laika wants to solve a problem, she practices indigenous alchemy and then works her way up to a higher level of perception, where solutions are readily available. She solves the problems of bees at the level of the hive.

Indigenous alchemy is made up of four steps: identification, differentiation, integration, and transcendence. Identification is the quality of serpent; differentiation, of jaguar; integration, of hummingbird; and transcendence, of eagle. Cells can be identified as single organisms, yet they differentiate (specialize) into muscle cells, brain cells, skin cells, and others; then they integrate into heart, stomach, brain, and the like; and then they transcend the sum of their parts. You can’t describe an eagle by its organs, yet they are what it’s made up of.

The philosopher Ken Wilber explains this process and describes how as children, we identify with our parents, and then as adolescents, we pull away from Mom and Dad in order to differentiate and develop our own identity. Eventually, we’re able to integrate our parents into our lives without fearing that we’ll lose our sense of self, and we finally transcend by becoming parents ourselves.

We’re constantly in the process of identifying with some things, differentiating from or integrating with others, and transcending others. I love to watch the shifts that occur over the course of the football (soccer) season, for instance, as rabid fans identify with their regional teams and despise the opposition. Yet when a team is selected to represent their country in the World Cup, the fans start cheering for players they despised weeks earlier, now identifying at a national level.

Indigenous alchemy not only describes the four levels of perception, it also allows you to navigate through them. It not only explains that water is H2O, it also teaches you how to make it rain. Indigenous alchemy is the fast track to transforming your life . . . but you can’t skip any of the steps of the process. After all, cells can’t become eagles, unless they differentiate into organs and integrate into systems first.

One of my students spent hours every week shuttling kids to soccer games in her minivan. Everyone considered her a soccer mom, but she had a very strong spiritual calling and knew she was meant to be a teacher and healer. One day she discovered a lump in her breast and was diagnosed with cancer. In everyone else’s eyes, she was now a soccer mom and a cancer patient. However, she didn’t want to identify with her disease―she wanted to differentiate from it and then overcome it. It was then that she enrolled in the Four Winds Light Body School.

After the first weeklong training session, she announced to her family that she was neither a soccer mom nor a cancer patient―she was a healer. But no one believed her. “I am not my cancer,” she would tell fellow students, “I am simply fighting cancer.” We believed her, and respected that she was differentiating from the disease. Soon she began to achieve integration, saying, “I am not my cancer, and I’m not fighting it, I’m learning from it. It’s my wake-up call.” Integrating her cancer allowed her to reach the final step in indigenous alchemy, transcendence. By the end of her training, she was able to say, “My cancer saved my life by allowing me to reinvent myself.”

My student had ceased identifying with her diagnosis; instead, she recognized that her healing had to do with honoring her calling and enlisting the support of her family in helping her become the healer she wanted to become. She had to go through chemotherapy and transform her personal relationships. She couldn’t take any shortcuts and become a healer overnight because it wouldn’t have been authentic. It wouldn’t have resulted in her own transformation, only in a flight of fantasy. The process of indigenous alchemy takes time.

The way out of identification (into jaguar) is by owning the projection. The way out of differentiation (into hummingbird) is by turning it into a journey statement and asking yourself, “What do I have to learn in order to move on?” The way beyond integration into transcendence (eagle) is to see opportunity where you once saw only problems. Indigenous alchemy allows you to do your learning within, rather than through your children, parents, spouse, and co-workers.

An Earthkeeper can perform the process of alchemy using her medicine bundle, or mesa, which is a collection of stones and sacred objects she carries with her. She uses a stone or object to represent each theme that she’s working through in her life―when she has learned the lessons, she is able to move the stone or object into her bag as part of her spirit medicine, and it can be of benefit to others. Eventually, the Earthkeeper’s medicine bag contains all the wisdom about herself and nature that she has acquired. Her stones have become objects of power, and her identity is then based on that which she has transcended.