When Kundalini Awakens. Now What?

by Kara-Leah Grant: Recently, I sat down cross-legged to do my daily Kashmir Shaivism Tantric*practice as I have done every day for the past 150+ days… 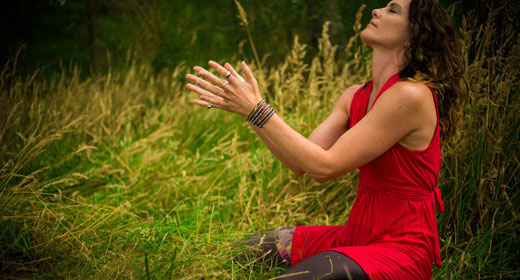 More if you count my first attempt at hitting 1000 Day Practice, when I got up to Day 338.

This practice has become very familiar to me. However, unlike my asana (posture) practice, it is still something I am intellectually imposing upon myself. I am executing the practice – which consists of pranayama, chanting, visualisation and meditation – with my mind and breath. The I-ness is in control.

My asana practice is different. For many years now, since 2004, I have been able to surrender to an embodied sense of Kundalini within and allow her to guide my practice. Of course, Kundalini doesn’t wait for me to get on my mat. Anytime I surrender into breath and awareness, she’ll begin to undulate and spiral, snaking through my body and releasing tension where she finds it.

Kundalini happens in the bath. In bed before I go to sleep. In bed with my consort. When I stand still in the kitchen and listen to the infinite. At the beach when I watch my child play.

But I don’t surrender to Kundalini during this particular Practice. Where she wants to go and what I’m meant to be doing in the practice diverge, and so I wouldn’t be doing my practice anymore.

This night was different.

I began as I always do, sitting cross-legged and arriving in my body and in my breath. I could feel Kundalini tugging at me, wanting to move, wanting to seek out fear and tension and the conditioning of my mind, hidden as it is in my body.

And so I let her move, figuring I could allow her to do her thing first, and then once I’d settled more, come back into my practice.

As she began to dance, I felt the fullness of her energy, both more feminine and more serpentine than ever before. I felt her rising up my spine, snaking back and forth along the nadis (the channels that Prana flows along), sensing, feeling, opening, surrendering, releasing.

I began my practice, discovering I could contain Kundalini within the form of what I was doing while allowing her to continue sensing and feeling and releasing. This first portion of the practice includes breath retention, and as I held the form while surrendering to the flow, I noticed I was no longer in control of my breath.

I was being breathed. And the breath was working in tandem with Kundalini.

When I needed to be longer somewhere because she needed to explore more deeply that particular nadi, the breath would naturally draw out. Together, breath and flow, I was taken through this aspect of my practice.

I moved into the second part, which directly involves engaging with Kundalini, and with Shiva. I’ve done this hundreds of times in the last five years. I get it on an intellectual level. My visualisation isn’t that crisp or certain though and it hasn’t really developed much in all that time.

As I went through the movements, the breath, the chanting and the visualisation, letting my breath lead and Kundalini flow… Shiva began to descend. No, that’s not quite right. Just as I’ve been feeling Kundalini in my body for many years, I’ve also been feeling Shiva. He showed up a few months ago. Only I didn’t know it was him.

At the time, I thought I was energetically feeling my consort within me, familiar as I am with his body and energy. Now I realised that it wasn’t my consort. It was Shiva, and he was coming down to me again in this practice.

Kundalini was rising up from the earth. Shiva was coming down from the sky.

And now they are both within me, melding at the heart, spiralling into a flame contained within a Lotus Flower.

This was no intellectual idea anymore. This was a lived experience, an embodiment. My practice was happening to me. And as it happened, I was pausing to take notes, as if I were a scribe, a scientist, not wanting to miss anything of the unfolding experience.

I could feel Kundalini still sensing out blockages in the nadis. I could feel Shiva doing the same, but the way he moved and released had a different energetic signature. And they kept coming back to entwine at the heart, in the centre of the flame, held in the lotus flower.

And then I felt it… this great union of the two energies at my heart centre and a radiating consciousness expanding outward.

I was moved on to my belly, lying flat, hands extended in prayer position – prostration – my forehead pressed to the earth.

I don’t know how long I was there. Prostrating. Belly down.

At some point, I came back up to sitting and sat for 20 minutes, finishing the practice. The deep trance I was in had shifted and I noted my conditioned mind was again functioning. I needed to hone my awareness on my breath with some effort again.

This is Yoga. This is Union. This is why we practice.

We purify ourselves – body and mind – so that we can raise Kundalini up, and call Shiva down, the two joining in our hearts and igniting a new consciousness. A child of the Goddess, a child of the God.

Yoga is not an abstraction. It is an embodiment. It is a process. And eventually, it is a union between ascending Kundalini and descending Shiva. They meet in the heart.

In the Union of these two forces together, Kundalini and Shiva (sometimes referred to as Shakti and Shiva), the practitioner becomes one with all Consciousness. It is possible in this state to literally feel any aspect of consciousness within you as if it were you.

However, without proper training, preparation or framework there is no context for this experience – except for the prevailing norms of society. If the prevailing norms don’t recognise, support or understand the experience, the person experiencing the awakening (partial or complete) can experience great suffering. They may lose their centre or ground, especially if they haven’t done the necessary clearing or grounding work to hold the incredible energy released as Kundalini ascends or Shiva descends.

In our society, such a loss of ground combined with a lack of context around the experience results in people being diagnosed as mentally ill – which they are in a way. The conditioning of the mind co-opts the experience and it becomes filtered through those ideas and beliefs.

It is all so easy to get stuck on the idea of Kundalini Awakening without realising that this is just the beginning. It’s the call to action. Now, the real practice begins.

Even now, that another aspect of the practice has unfolded, there is no arriving, no end, no attainment, nothing to hold on to. That moment in time has been and gone as well. My practice remains, and so too does my conditioned mind. Or at least, some of it 😉

*Tantra means teaching, or an instument for expansion. It does not mean conscious sex. I use the term here in respect to the lineage that I practice in, learned from my teachers Shiva Rea and Christopher Tompkins, and from the teacher within.