Australian native Mina Guli wants people to know she didn’t set out to run 2,620 miles just for the exercise… 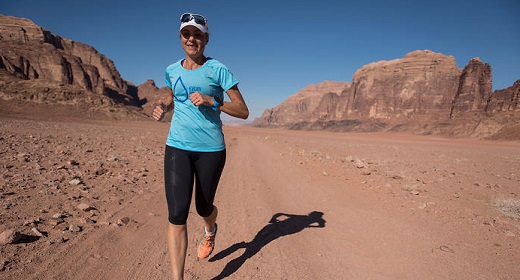 “No,” Guli said, laughing. “Are you kidding? It’s like 100 marathons, 100 days of pain… It’s been running in some of the most extreme places on the planet from the Aral Sea in Uzbekistan … to Australia, which was incredibly hot.”

The 100 marathon challenge was born out of what Guli calls “necessity.” She is the founder and CEO of Thirst, a non-profit created to help battle water scarcity around the globe. By the year 2050, the United Nations says as many as 5.7 billion people could be living in areas without easy access to one of life’s most essential resources.

“Most people have no idea. So I wanted to run because I wanted to make saving water famous,” Guli said.

Guli’s journey began at the New York City Marathon this past November. She continued to log her miles in some of the most iconic and remote locations on earth — including Paris, Jordan, and India  — winding her way through six continents, all spots that have suffered dangerous water shortages.

Guli’s ambition for this project has taken her to the far reaches of the planet, but after 62 days in, her body hit the brakes.

“I’d had quite severe pain in my leg. The pain had gotten so bad that I couldn’t walk. My team had to carry me into the car, took me to the hospital, and I was diagnosed with having a fracture in my right femur,” Guli said.

She said she felt she had let down “all the people whose stories I wanted to tell.”

“I felt that I had let down the water crisis. I felt I’d let down my planet,” Guli said.

Then she got on her social media.

“I was sitting in the hospital literally outside the scanning room. The doctors are sitting in front of me,” Guli said. “And… messages started to come through on my phone… It was people who I didn’t know who offered to donate distance to the campaign. We’ve had people on all seven continents, including Antarctica, running for us, running for me, for water.”

Whether they were literally helping push Guli toward her goal or running on their own, strangers from around the world collectively completed nearly 20,000 miles in only 38 days.

It all culminated back in New York City for the 99th and 100th marathons where her unthinkable mission began.

“The support… has inspired me to keep going even when I thought all was lost. It’s inspired me to be a better person, to stand up, and to be prepared to make a difference. And more importantly, it’s shown me that even though each one of us is an individual, together we can make a huge change,” Guli said.

Doctors advised Guli against running so many marathons, citing her age and physical health. In all, strangers from around the world ran 748 marathons in Guli’s name, far surpassing the remaining 38 she needed to complete her goal.