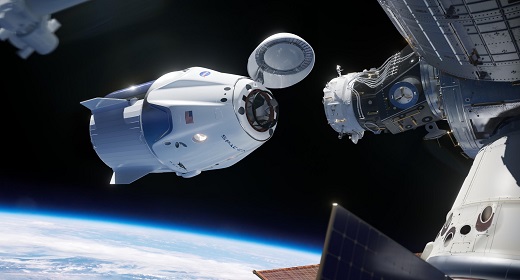 SpaceX has become the first company to design, build, launch, and now dock a commercial spaceship made to fly people to the International Space Station.

Elon Musk’s rocket company launched the seven-seat vehicle, calledCrew Dragon, on Saturday at 2:49 a.m. ET. By early Sunday, the 14,000-pound space capsule had caught up to the football-field-size laboratory that orbits Earth.

After a series of safety checks, SpaceX began nudging Crew Dragon toward the front end of the space station. At 5:51 a.m. ET, it made soft contact with a docking node, engaged six arms, and latched on. About 11 minutes later, the spaceship tightly screwed itself to Node 2 of the space station.

Nobody was on board to open Crew Dragon’s hatch — only 400 pounds of cargo and a crash-test dummy named Ripley. However, NASA said SpaceX’s demonstration, or Demo-1 mission, is “a critical first step” in restoring US-crewed access to space, since the goal is to prove the new spaceship is safe to fly its astronauts.

“A new generation of space flight starts now with the arrival of @SpaceX’s Crew Dragon to the @Space_Station,” Jim Bridenstine, the NASA administrator, tweeted on Sunday. “Congratulations to all for this historic achievement getting us closer to flying American Astronauts on American rockets.”

The symbolism was not lost on the space station’s three-person Expedition 58 crew, who opened the hatch, floated inside Crew Dragon at 8:07 a.m., and held a greeting ceremony for Crew Dragon live on NASA TV.

“It was a beautiful thing to see,” said David Saint-Jacques, a Canadian astronaut and station crew member. “Today we welcome a brand-new spacecraft to the space station and a great new addition to the quiver of tools we have for humans to further space exploration. This is a good day, a first day of a new era for the next generation of space explorers.”

‘Welcome to the new era in spaceflight’

“On behalf of my crew, I would like to congratulate the United States of America and the NASA team for this very significant event: the launch and docking of the SpaceX Crew Dragon spaceship,” Kononenko said. “It’s a historic step … on our way of human beings [moving] beyond low-Earth orbit to the moon, and Mars, and the future.”

Saint-Jacques spoke next, marveling at the thousands of people, years of work, and close collaboration between SpaceX and NASA that it took to pull off the docking of a commercial spaceship.

Last was Anne McClain, a NASA astronaut who’s part of the space station’s crew. She had the most to say about Crew Dragon’s successful arrival at her orbiting home in the sky.

“Our sincere congrats to all earthlings who have enabled the opening of this next chapter in space exploration,” McClain said. “And congratulations to all nations, private space firms, and individuals who wake up every day driven by the magic of exploration. This day belongs to all of us.”