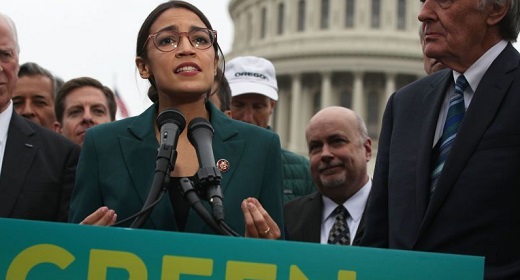 Opponents of serious climate action are routinely using a nonsensical $93 trillion dollar cost projection to attack the Green New Deal — an effort to mobilize the U.S. economy to shift away from fossil fuels as fast as technologically possible to preserve the livable climate that has made modern civilization possible — even though the figure has been roundly debunked by fact checkers.

The reality is that the price of what are called “core” clean energy technologies — including solar power, onshore and offshore wind, and batteries — have seen “spectacular gains in cost-competitiveness” in just the last year, according to a Bloomberg New Energy Finance (BNEF) report released Tuesday.

Modernizing and decarbonizing the country’s aging energy infrastructure now has so many economic, environmental, and health benefits that the overall benefit of strong climate action would be enormous.

FactCheck.org notes that, by itself, “the cost of climate change could easily balloon into the tens of trillions” for this country based on recent research. The National Climate Assessment (NCA) by hundreds of the country’s top scientists — approved by the Trump administration in November — warns that a do-nothing climate policy will end up costing Americans more than a half-trillion dollars per year in increased sickness and death, coastal property damages, loss of worker productivity, and other damages.

And so the biggest benefit of the Green New Deal would be avoiding those costs.

Meanwhile, the major independent peer-reviewed analyses of the most aggressive climate action have always concluded the cost of inaction is much smaller than the cost of action.

The most comprehensive assessment by the world’s leading scientists and economists was done by the U.N. Intergovernmental Panel on Climate Change (IPCC) in 2014 and approved unanimously by every major government. It found that, globally, the loss to economic growth from taking steps to preserve a livable climate is a mere 0.06 percent a year. Instead of growing some 2.3 percent a year as typically projected, the economy would grow 2.24 percent with climate action.

In short, the change in economic growth rates would barely be noticeable.

So how exactly did Republicans come up with this $93 trillion cost?

First, they ignored the fact that the Green New Deal is currently a “nonbinding” resolution, as the chief House sponsor Rep. Alexandria Ocasio-Cortez (D-NY) tweeted last week. As FactCheck.org pointed out earlier this month, nonbinding resolutions technically cost nothing in and of themselves because they require other legislation to fulfill their goals.

All we can do at this point is make a rough estimate of the costs and benefits of fulfilling a Green New Deal. Opponents of the Green New Deal typically cite the cost as $93 trillion — which is the very high end of a projection from the right-wing American Action Forum (AAF) — while ignoring the potential benefits of saving energy, reducing pollution, and avoiding catastrophic warming.

PolitiFact called the $93 trillion figure “about as strong as a clothespin in high wind,” and labeled Sen. Jodi Ernst’s (R-IA) use of it “False.”

The figure is so nonsensical that Politico devoted an entire article to explaining why it is “bogus.” For instance, “$80.6 trillion of the costs in AAF’s study come from a jobs guarantee and universal health care.”

As a result, many analysts have rightly focused on trying to cost out the central policy focus of the Green New Deal, which is decarbonizing the U.S. economy.

But even here, most analyses model energy and climate policies that aren’t even in the resolution. The AAF, for instance, states the Green New Deal “envisions enough high-speed rail to make air travel unnecessary,” and projects that this “would cost between $1.1 and $2.5 trillion.”

But the resolution says nothing like that. It just says that one goal is “to eliminate pollution and greenhouse gas emissions from the transportation sector as much as is technologically feasible, including through investment in” zero-emission vehicles, mass transit, and “high-speed rail.”

And the good news here is that the battery and electric vehicle (EV) revolutions are happening so fast that EVs will soon be cheaper to buy than comparable gasoline cars — while having a much lower cost for fueling and maintenance.

That’s why, in January, the Wall Street Journal auto columnist Dan Neil explained why buying a new internal-combustion (IC) engine car would be a big mistake.

“During the reasonable service life of any vehicle I buy today, I expect the demand for IC-powered vehicles will drop to practically zero, equivalent to the current market penetration of flip phones,” Neil writes. So “a gas-powered vehicle would be too expensive.”

his highlights an overall problem with costing out any plan to phase out dirty and inefficient technology — like internal combustion engine cars or coal-fired plants — with cleaner and cheaper technology.

For instance, the nonbinding resolution proposes a goal of “upgrading all existing buildings in the United States and building new buildings to achieve maximum energy efficiency, water efficiency, safety, affordability, comfort, and durability, including through electrification.”

Critics have said this would cost $1.4 trillion dollars over a decade or more than $100 billion a year. But again, the point of energy efficiency is to save energy. Just one small part of that upgrade — simply switching to LED lighting — is projected to save Americans $20 billion dollars a year when it’s done.

A 2014 International Energy Agency report on the productivity and health co-benefits of just the energy efficiency measures find these co-benefits are so large they reduce the cost of those measures by a factor of two or three.

The most specific part of the Green New Deal resolution calls for decarbonizing the U.S. electric grid by 2030. The AAF says that will cost $400 billion dollars a year.

But in reality that’s not what it would cost. Indeed, as ThinkProgress reported Monday, a major new report found that replacing 74 percent of coal plants with renewables would immediately reduce costs. And by 2025, virtually all existing coal plants — and many natural gas plants — will be unable to compete with renewables.

It’s cheaper to replace most coal plants with renewables than keep them open, per report

In fact, as the new analysis released by BNEF Tuesday shows, the levelized cost of electricity (or LCOE) — the cost of power from a plant averaged over its entire lifetime — for lithium-ion batteries has fallen 35 percent since the first half of 2018 alone.

During the same time, the LCOE for onshore wind, solar PV, and offshore wind have dropped 10 percent, 18 percent, and 24 percent respectively.

What we can say with certainty now is that rapid decarbonization becomes more and more affordable every year. Meanwhile, the cost of inaction — which is already in the range of tens of trillions of dollars — gets higher and higher.