by Kate Murphy: Renewable energy is a hot topic in Ireland right now”… 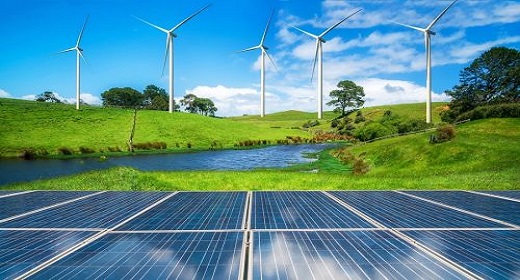 As a country with promising renewable energy sources and tough renewable energy targets to meet in the coming years, politicians and scientists have been working together to formulate sustainable, realistic solutions to Ireland’s energy needs.

But what’s the energy situation in Ireland right now, and what can we expect in the future from its’ renewable energy sourcing commitments?

In the last decade or so, Ireland has completely transformed the energy sources that it relies on to sustain its population. Once centered around fossil fuels and peat-powered power stations, Ireland is now primed to exploit renewable energy sources. In fact, in 2017, fossil fuel importing costs dropped by 1.2 million euros on the Emerald Isle. Given that just back in 2015, Ireland imported around 90% of its energy from around the globe, this is an incredible shift in dynamics–revealing a genuine Irish commitment to sustainable energy.

The EU and Renewable Energy Targets

In 2015, Ireland realized that its fossil fuel sources wouldn’t last forever, and the world as a whole is moving away from non-renewable energy consumption.

As a member of the European Union (EU), Ireland must meet the EU’s renewable targets. The EU set a binding, or non-negotiable target for each country:

As a result of this EU-imposed target, Ireland devised its own plan known as the Renewable Electricity Support Scheme (RESS).

The RESS is designed to meet Ireland’s own renewable energy pledges by 2030. It’s been approved by the government and the main aims are as follows:

The future of Ireland’s energy industry is certainly renewable, but how does the state plan on implementing these aims?

A key goal of the RESS is to give communities the chance to invest in renewable energy projects. This means a local community can take ownership over some part of the sustainable energy projects and encourage wider involvement in making the Emerald Isle even greener.

Energy projects, especially offshore wind and solar projects, can now bid for State funding and support. Allowing the community a chance to invest in the project will be critical to securing a successful bid.

A draft of this legislation, which will set out the State’s renewable energy plans in detail, must be set before the EU by 2019 for official approval. The goals are to enhance the security of energy supply and ensure the costs on consumers reflect the current market realities, as opposed to the fixed cost system Ireland currently uses.

Goal 7 of the U.N.’s 17 Sustainable Development Goals is ensuring that everyone has access to reliable, sustainable, affordable and modern energy. The Irish state is very conscious of this goal, as explained in more detail by Mary Robinson, founder of the Mary Robinson Foundation–Climate Justice.

If Ireland is going green, what does the future of the energy industry look like in the country, and what technology can we expect to see developing first?

After natural gas, wind energy is the greatest source of electricity generation in Ireland. It’s Ireland’s largest and cheapest energy resource. As a result, the Sustainable Energy Authority of Ireland (SEAI) was set up to harness wind energy and find new ways of making it sustainable and commercially available to all.

We can expect to see a trend towards wind-based energy projects in Ireland once the project bidding commences. In fact, as Ireland has the potential to generate some of the lowest-priced electricity in Europe, it’s likely we will see a shift towards projects such as alternative farm enterprises–collaborations between farmers and local communities that are popular elsewhere in Europe.

ISPs are a type of renewable power solution that’s entirely self-reliant. It does not need an external power source. The most powerful hybrid solution on the market, the ISP stores energy for up to 12 days without wind or sun, and it works even in low-wind areas.

A TES turbine works in low-wind areas as well, such as urban settings, and it generates green energy in areas no one believed possible before.

Solar paneling is easily installed, convenient, and can power a single home almost entirely on its own. Plus, these panels work in lower-light and urban areas, making them suitable for the wider community.

Research into tidal energy solutions is still in early stages in Ireland, but the SEAI

are investing heavily into the research. Although Ireland has limited tidal streams to utilise for energy, it’s likely offshore/ocean-based wind farms will develop prolifically around the Irish coast in the coming years.