Life, Liberty, And The Pursuit Of Happiness – Marianne Williamson

by Marianne Williamson: There are millions of people in America ready for a new conversation, a new vocabulary about American politics. 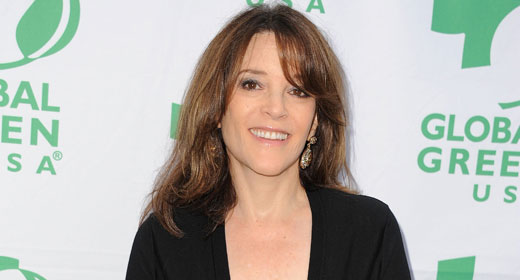 The one we have now is rife with corruption. But it’s not just the financial corruption of our political system that’s a problem, it’s also the spiritual corruption in our hearts. We’re both outwardly and inwardly in trouble, and we have to address both if we’re going to rise up from the crisis into which we’ve descended.

A state of low-level anxiety now infuses the very air we breathe, so disconnected have we become from a sense of what’s really important and what we need to survive. Deep democratic and universal values have been handed down to us; it’s not that they’re absent from the ethers, they’re simply absent from our hearts today. And until we retrieve them, we will continue to spiral down. Love, not hate, makes America great. Until we reclaim justice, and mercy, and brotherhood, and forgiveness, and charity, and compassion as the foundations of our humanity, then our political system will continue to reflect this spiritual corruption, the way it does now. We didn’t get off track because of Donald Trump; we got Donald Trump because we got off track. He is merely a reflection of the cravenness, the moral compromise, the legitimized whoredom that we had already allowed to corrupt our society. And that hyrdra has many heads. Just defeating Donald Trump will not fundamentally fix the problem; we must defeat it in our hearts.

We must ask ourselves what democracy is, and why it matters. We must ask ourselves what it means to us personally, existentially, to consider that all people are created equal. To ask ourselves what it means that God gave all people the inalienable right to life, liberty, and the pursuit of happiness. To consider what it means that government was instituted among us to secure those rights. To resist the temptation to intellectual and emotional shallowness that define our popular culture today. To deepen. To mature. To stop playing victim all the time. To heal ourselves of the epidemic of immaturity, the chronic silliness that has us playing at life like children rather than tending to life as genuine, powerful, responsible men and women.

We need reverence and devotion toward each other, toward the children of the world, and toward the planet itself. We need reconciliation with the God of our understanding, and radical forgiveness towards each other. We need to look at ourselves and ask how we can do better, devote ourselves to our country and to our children’s children, and rise up from the ashes of our self-pre-occupation. We need desperately to evolve from “me” to “we” now. Only then will our nation rise: when we rise first.

America has gone off track, but it’s our job to correct it. Democracy gives us rights but it also gives us responsibilities, not just to receive the blessings of liberty but to tend to them in our time and bequeath them to our children. This is not about someone else. It’s about each of us. We, the people, are the only true guardians of democracy. We have a much greater purpose on this earth than just to “get what we want.”

That has always been America’s greatness: that we stood for something higher, and strove for something higher. Until we retrieve that greatness, we will continue to go down. But as soon as we do retrieve it, we will begin to miraculously rise up again. First we need to purify our hearts; then and only then will we have the power to save our country.