Tibet: Dalai Lama Calls on Women to Path Way Towards Peace and Prosperity by Taking Leadership Role in Politics and Promoting Human Values

Last week, His Holiness the Dalai Lama spoke to a delegation of 75 women from the Young FICCI Ladies Organisation (YFLO) of New Delhi… 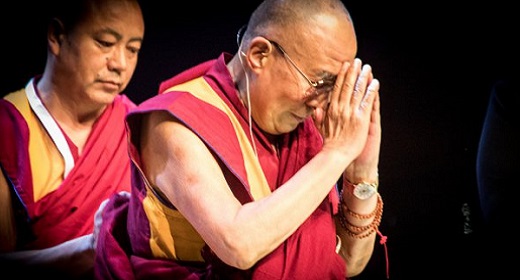 He focused on the importance for women to play an active role in our society, saying it could have a positive global impact. He firmly criticized discrimination against women based on religious grounds and therefore assessed education was the only route to social transformation.

His Holiness the Dalai Lama last week urged women to take a more active role in promoting and guiding social values for humanity in the 21st century, noting that more equitable gender roles in society are fundamental to advancing humanity toward peace and economic prosperity for society as a whole.

Speaking to a delegation of 75 women from the Young FICCI Ladies Organisation (YFLO) of New Delhi at his official residence in Dharamsala, northern India, on 18 February, His Holiness explained that if more women took up leadership roles in fields such as politics it could have a positive impact on a global scale. He cited as an example former Indian prime minister Indira Gandhi, the first woman in the history of modern India to hold the post.

“We are now in the 21st century. If we look back at the 20th century, it was a time of violence and fear. Therefore, we should make this century an era of non-violence and compassion,” said the Tibetan spiritual leader. “With regard to compassion, there is scientific evidence that women are more sensitive to others’ pain. Indeed, in human history most warriors, or killers, were men, whereas women consistently show more concern for others’ well-being. In this century we should make special efforts to promote loving-kindness and women should take a leading role in this. They shouldn’t just stay at home, but should support and be actively involved with education.” (His Holiness the Dalai Lama of Tibet)

Founded in 2004, the YFLO is a platform for young women from diverse professional and entrepreneurial backgrounds to interact with each other, with the primary objectives of promoting entrepreneurship and professional excellence, acting as a catalyst for the social and economic advancement of women, and making women aware of their strengths.

The Dalai Lama also criticized discrimination against women on religious grounds and as a result of social customs, observing that education was the only route to social transformation and that women should play a key role in this evolution of gender relations.

“The Buddha gave men and women equal opportunities in that he offered ordination as a bhikshu to men and as a bhikshuni to women,” the 83-year-old Nobel laureate noted. “Although the introduction of the bhikshuni lineage in the Tibetan tradition is something I can’t achieve by myself, I have been able to encourage nuns and women to study. The result is that there are now nuns who have attained the highest level of education [the geshema degree].” (His Holiness the Dalai Lama of Tibet)

On a far more fundamental level, the Dalai Lama continued, women have the ability to mould the society through the compassion of motherhood and their love for their children. Reminding the audience that mothers gave birth to every person alive in the world today, he related how the kindness of his mother had influenced his own life.

The Dalai Lama also reiterated his assertion concerning his own reincarnation, that the next Dalai Lama could well be a woman if circumstances required. He referenced as an example the lineage and spiritual leadership of the Samding Dorje Phagmo, dating to the 15th century, the highest female incarnation in Tibetan Buddhism and the third highest-ranking leader after the Dalai Lama and the Panchen Lama.

“She was particularly kind to me, at the time her youngest child. There was no school in our village and she was illiterate, but she was naturally kind,” His Holiness said. “I had no toys to play with, but instead rode on her shoulders as she went about her work in the fields or with our animals. We, her children, never saw an angry expression on her face. She was kind to us, kind to our neighbours. When victims of famine came to the door, she always found them something to eat. It’s because of her that I am the happy, smiling person I am today.” (His Holiness the Dalai Lama of Tibet)