Why Yoga is more than wearing trendy spandex and saying “Namaste”

by Tina Fey: Writing in the Sydney Morning Herald, Kamna Muddagouni (a hindu) noticed the uptake in white women participating in Yoga and using the word Namaste… 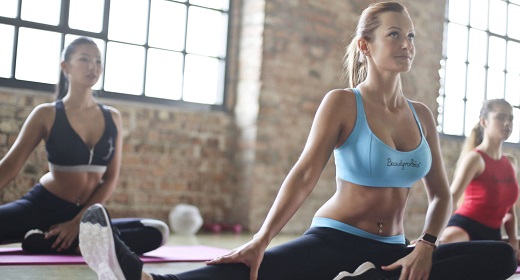 She wonders if those women understand the history and importance of the word Namaste to the Hindu people, and she challenged the mainstream use of the word, along with yoga in general.

Muddagouni takes the time to educate her readers on the meaning of Namaste: she reports that it is used as a way of greeting elders in Hindu culture, as well as other cultures.

According to Deepak Singh, an Indian born author, namaste is the “equivalent of hello, but with an element of respect.”

“If we didn’t say namaste, they wouldn’t consider us to be good kids.”

It isn’t a strictly yoga word, either.  It turns out namaste is said to just about everyone who deserves respect.

The problem Muddagouni had with hearing it in a predominantly white yoga class is that the meaning and symbolism is lost on white people who think it’s trendy to say it.

Many people think that yoga is primarily a form of exercise, which was popularized amongst white North Americans by celebrities such as Madonna.

Remember when Madonna talked about practicing yoga? Many people had never heard of it, and were intrigued by the latest fitness craze being celebrated by celebrities.

But yoga is about much more than celebrity and spandex.

In fact, the mainstream attention to yoga seems to have taken away a great deal of the underlying meaning and tradition associated with the spiritual experience.

Companies such as Lululemon for example, have built an entire empire on society’s need for more yoga pants.

We’ve lost sight of the fact that yoga pants aren’t meant for the board room or office, yet if you look around you right now, you might find someone wearing a pair of black Lululemon yoga pants trying to pass them off as “dress pants” or “slacks”.

For the record, yoga pants aren’t meant to look great, they are meant to move and breathe with your body as you channel your inner peace.

But try telling that to the women in the cubicle next to you and you’ll surely be picking a fight.

Kamna Muddagouni points out that yoga is not just a form of exercise, but a way of life.

As a Hindu woman, it is part of her culture and part of her lifestyle. She doesn’t claim to be a “yogi”, but she does appreciate the physical and spiritual connections that can be made through practicing yoga.

According to Muddagouni, she’s now on the outer of a culture that is hers:

“Given most classes are taught by white women, and most ads you see for yoga classes or yoga wear feature white women, white women have become the embodiment of yoga in Australia. As a Hindu woman, this places me as the “other” in a culture that is mine.”

She recounts an unsettling experience in a recent yoga class where a white yoga instructor offered the term namaste to the mostly-white group, and she felt uneasy about it.

It’s not that white people can’t practice yoga, but she believes that the traditional art is lost on people who pay $20 for 30 minutes of yoga.

She believes, as do many others, that yoga is part of a bigger picture, including our health, wellness, physiological and spiritual transformations.

She believes that the way yoga has been turned into a product that is sold for money reduces its roots, impact, and true meaning.

When you put it like that, it does seem strange that people flock to yoga studios to take yoga classes from white people who, while they mean well, might not fully understand the responsibility of the work they are doing.

After all, yoga is rooted in hundreds of years of history and practice, and when you reduce that practice into a 30-minute class, much can be lost on both the instructor and participant.

She points out that the desire for ownership over an ancient practice, like yoga, is true to Western culture – North Americans love to claim things as their own and put their own spin on it until it is almost unrecognizable to its origins.

Yoga is no different.

It’s great that so many people attempt to enjoy yoga on a regular basis, but Muddagouni’s argument is that they are actually missing out on what yoga is all about.

You can’t fully engage in yoga and its spiritual practices in 30-minute classes. That’s just not what it was intended for.

So the next time you think about attending a yoga class, consider what you are going for and what you want to get out of the class.

If it’s just a chance to show off your new yoga pants, reconsider your motives. You’ll find you get more out of a yoga class if you make an effort to connect to your spirit, rather than your yogi friends in a 30-minute session.