Why Yoga May Have Happened

by Himanshu Joshi: Imagine Yourself 10,000 Years Ago… 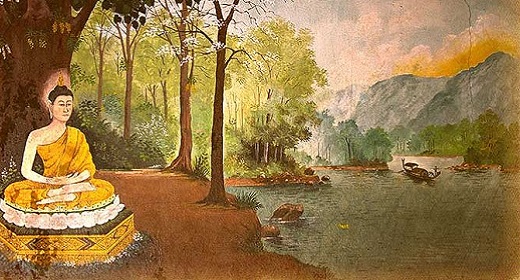 You awake to the smell of the earth as the sun warms and begins to evaporate the drew. Your simple portable dwelling provides some shelter from the elements. Your tribe rises at dawn; children scamper around playing. You know everyone in your tribe, and they all know you. When later that day game is brought back from the hunt to be cooked, it is shared by all. When the sun sets, a fire is made and you observe the wood turning into heat, light and ash. The smoke rises into the sky where the stars are so clear due to lack of any ambient light that you can recognize constellations like old friends. When it is time to sleep, sleep comes easily to a body in tune with the rest of nature. When the tribe moves on, you look behind and all that is left of your presence there are the folded grasses where your shelters were, and a fire-pit. In a few weeks even this
will become invisible.

The idea of “having relationships” with others in your tribe is not a concept anyone understands. You have known these people all your life. Some you like more than others, but there is no getting into and out of the relationship you have with them. They literally are your relations, just as are the animals and plants. The children around you are everyone’s responsibility, and they learn different skills from others in your tribe as they move freely around.

This is a gift economy. Currency does not exist, and the natural response to the abundance of life on the earth is one of gratitude. No one has the idea that human life should try to be prolonged, or that youth is better than maturity. The spirits of humans and animals inhabit the earth. The scenario above may sound utopian. That is largely because through projection and some quite unscientific studies by 19 th century Europeans, we have been led to believe that life for our ancestors was “brutish and short”. This was not the case. Nor was it the case that our ancestors were less healthy than we are today. Eating a varied “organic” diet, sugar in any form being quite hard to come by, and walking miles daily, our predecessors were generally fit, healthy, and competent at a variety of skills. The origins of yoga are somewhat mysterious, with the tradition being largely oral in nature. Carvings found in the Indus river valley civilizations of Harrapa and Mohenjo-daro depiciting a figure seated in what may be a yoga pose are dated at 2500 BCE.

The origins of agriculture begin approximately 5,000 years before this. The practice of yoga arises after the agriculture revolution. Most, but not all hunter- gath-erers became farmers cultivating the land. Farmers must protect their crops, build fences, store excess food, and be able to trade that excess. So agriculture precipitates ideas such as ownership, control, currency, policing and law. Stratification of society ensues. Farmers eat a mono-diet of planted crops and domesticated animals, as opposed to the varied diet found in season by hunters and gatherers. The negative effect on health and lifespan in many cultures was enormous.

The practice of yoga may have arisen as a cure for this new lifestyle : a way of reconnecting with natural forces and rhythms that were becoming forgotten.

The tools of yoga are the ones we already have: body, breath, and mind. Some of the later yogas’ view of the body is much different than the idea of the self divided from spirit that has become embedded deep in our culture, attitudes, and behavior.

The word yoga can “union,” or an application of means; in this case, it signifies the means to reconnect something. Let’s remember that something is already here. There is no separation of spirit from nature except in our mind. Any dedicated outward searching will ultimately lead us back to a remembrance of this ground of being. The ideas of the mind drop into the heart and body, and like any thing rooted to the earth, the flowering of our awareness is related to how much nectar is drawn up from our connection to the primal elements from which we grew.