Yoga Is A Revolutionary Act

by Nathan Thompson: I’m not interested in inspiring people… 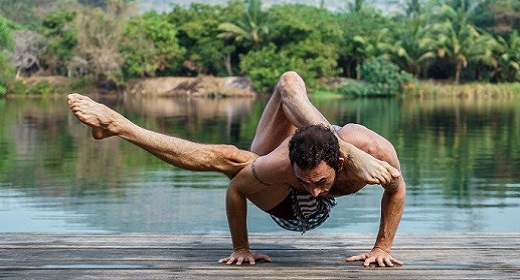 These days it’s harder to see such children. Mesmerised as we are by Facebook feeds and curated content. Reality is fudged, difficult to gauge, and truth is trash on the beach.

Strangled with stress, it’s hard to live while rich and powerful men invest billions in keeping us ill-informed. The promise of social media uniting us has been betrayed and we are left shouting into separate echo chambers.

It’s hard to be idealistic these days.

I do Ashtanga Yoga because it is one of the few places where experience can be trusted. My body doesn’t lie.

The truth may be out there but it’s easier to find in-between the sinews. I feel it when my leg slides down sweaty shoulders: it’s in the unclouding of my hip joint. Connecting to this truth helps me fight despair.

But lowering face-first into a BO-smelly mat is hardly escapism. It is not about having your head up your arse either, although you sometimes end up like that.

If yoga is practiced with the correct pranayama (breathing) and drishti (gazing) the mind, like the body, is made more sensitive so it becomes harder to ignore the joy and suffering of life.

By constantly connecting with true experience on a visceral level, the mind becomes less tolerant to lies and, seeing as our corrupt powerful rely on them to maintain control, we can become free from that. Therefore, yoga is a revolutionary act.

It is not the only way of course. But connecting to truth, in whatever way is accessible for you, is essential mental hygiene in our screen-filthy world because, well, here is Robert Anton Wilson:

Paul Watzlavik, among others, has performed classic experiments in which totally sane people will begin to behave with all the irrationality of hospitalized paranoids or schizophrenics — just because they have been lied to in a calculated and systematic way. This sort of “disinformation” matrix is so typical of many aspects of our society (e.g., advertising and organized religion, as well as government) that some psychiatrists, such as R. D. Laing, claim it is the principal cause of psychotic breakdowns.

Ashtanga Yoga founder, Sri K. Pattabhi Jois said to practice six days a week — an intense schedule, but then the forces of “post-truth” are intense too. Each session can take up to two hours.

Starting with a calm quiet breath: inhale, raise the arms, exhale, fold forward… Most people are familiar with the format. Unfortunately, to be palatable to a consumerist society the revolutionary heart of yoga has been removed in all but a few cases.

I like traditional Ashtanga because, unlike westernized forms, it takes the philosophical and cultural context of the practice seriously. It is for freedom from the fluctuations of mind, media and control.

In Ashtanga, the breath is sometimes stormy when the movements are demanding. Moans and the grunts come and sweat fountains as the body is re-forged in the fires of each asana (pose). Throughout it all, the aim is to calm the mind and pull the breath down into the depths of the abdomen to stabilize it all.

Training in this way creates freedom from the nervous system so gleefully triggered by Trump and the technocrats. It becomes possible to think clearly.

The early morning is the best time to practice. Before the mind becomes unruly. So you start waking up at 5am to get to the shala (yoga studio) to finish, shower and eat breakfast before work.

Soon a choice must be made. Between drinking, horsing around, staying up late and the practice. So you stop drinking. Stop eating heavy, fatty foods late at night. Maybe quit eating meat.

Renunciation, rather than stifling freedom, protects from the winds of addiction used to drive the consumerism that is destroying our environment. It leads us to live simply and, if everyone did that, the world would be a better place.

However, if everyone was merely putting their legs behind their head, as Ashtanga practitioners are trained to do, the world would just be a bendier place and it’s not about that.

Bodies, through experience, figure out what is a safe range of motion and if our joints are limbs trespass beyond that than we get panic and pain. Ashtanga pushes you to the edge of these limits to challenge the equanimity of your minds.

Ashtanga causes controversy when practitioners venture into the hinterlands of safety. Critics say practitioners are irresponsible or just moody ascetics but we do it to train the mind to be stable no matter what is flung at it.

I take poses where I worry about maiming my neck or tearing hamstring because, like the free climber hanging between perfection and death, I learn to balance my mind better strung between safety and harm.

Learning to breathe calmly in these situation means I’m catching flies of pain and panic in chopsticks like Mr. Miyagi in Karate Kid. You soon learn the body can self-regulate and, when it is listened to, few genuine injuries occur.

It is here, in these extreme poses that I find truth. I wish it was out there like it used to be but I have come to accept that, for my generation, the best places to look are inside.

Not like the trade unionists who fought for fair wages and healthcare in the early 20th century. Or the hippies who believed they could usher in world peace if people would only lighten their perceptions.

The complexity of today’s globalized world is overwhelming so the best solution is to take 90 minutes a day to practice. Buddhist meditation too but that’s another subject (there are some overlaps but many differences).
The rest of the time I am here… trying to have a productive year.

My generation, the maligned millennials, have been subject to some grotesque outrages: Limp Bizkit, the financial crash, the War on Terror. Our Occupy revolution was televised constantly but failed due to, as Adam Curtis put it, an inability to imagine an alternative.

For better or worse, the battleground is now the heart. I do yoga because the revolution is internal.