by Lauren Venosta: The brain. It’s a complex organ! You would love to have a brain that functions more optimally, right? 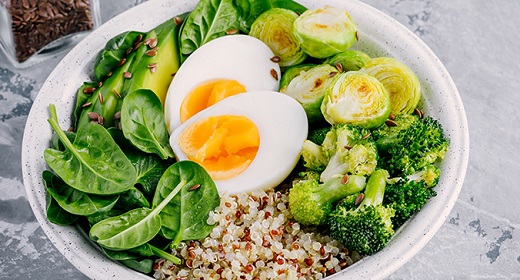 You may think you’re stuck with the brain you have—and that’s true to a point—but you can optimize the functioning of your cognitive abilities with your diet. How cool is that?

There are certain foods that enhance brain functioning and help improve memory. By consuming these foods, your brain’s functions—like the capacity to problem solve and the ability to remember details—will be heightened, and you can reduce the risk of cognitive decline. It’s estimated that more than 50 million people worldwide suffer from dementia, and 5.7 million of those people are in the United States.

With the 12 foods listed below, you can improve the functioning of your brain to keep your brain feeling young and sharp!

Have you ever noticed the shape of a walnut? It looks similar to the shape of your brain! The shell is like your skull and the nut inside is the brain. It’s impressive how nature hints at you to eat specific foods for your organs—brain-healthy food that looks like the brain is an easy choice. These nuts pack a powerful brain-boosting benefit.

At the University of California, Los Angeles, a study showed that eating a small handful of walnuts has a big impact on the brain. In fact, just 13.1 grams (compared to a 100 grams/1 ounce serving) of walnuts was enough to improve overall cognitive functioning. And the walnut doesn’t discriminate! It had the same effects no matter what ethnicity, age, or gender the participants were.

The small but powerful blueberry is an impressive fruit! It’s widely known that berries contain antioxidants, but blueberries contain a specific antioxidant known as anthocyanins, which have been shown to improve cognitive and neuronal functions of the brain. In addition to the health benefits and enhanced cognitive abilities, they also improve memory!

Another reason why blueberries are so powerful is that they contain flavonoids. Flavonoids have been shown to reverse the cognitive decline that you can experience as your brain ages. This will keep your memory sharp! All berries contain brain-boosting properties, but blueberries are the most powerfulfruit because of their nutrient density. They contain more significant levels of anthocyanins, flavonoids, and proanthocyanidins compared to berries like strawberries and raspberries.

Turmeric is a powerful spice that’s used heavily in Indian cuisine. It’s bright yellow and bursting with medicinal properties. When it comes to the brain specifically, turmeric contains an active ingredient known as curcumin that has multiple neuroprotective properties. Curcumin offers something called anti-amyloid activities. This means that it fights against amyloid plaque that builds up in the brain. Amyloid plaque is one of the causes of memory issues and dementia. The more you can fight the build-up of amyloid plaque, the more clear your brain will be. And a clear brain means better functioning! If you don’t commonly consume turmeric through Indian foods, you can make a drink called golden milk or even take turmeric capsules to get your daily dose of brain-protecting curcumin.

Did you ever think olive oil would be beneficial for your brain function? In the Mediterranean diet, olive oil is a staple. It’s used in cooking, in salad dressings, or as a drizzle over a meal as a finishing touch. One of the reasons olive oil is great for the brain is because it’s loaded with monounsaturated fats and has anti-inflammatory properties. The anti-inflammatory properties are so strong that it’s been proven to be as powerful as taking ibuprofen.  When you reduce inflammation in the brain, it protects it from neurodegeneration that leads to slower brain functioning and decreased memory. Another study showed that a Mediterranean diet that was supplemented with olive oil improved overall cognitive function. That means better brain functioning!

The fish that protects your brain! Salmon is helpful for your brain because it is rich in omega-3 fatty acids like EPA and DHA. These fatty acids are beneficial for the brain because your brain is partially made up of fat! DHA specifically has been shown to decrease the risk of cognitive decline that’s associated with dementia and Alzheimer’s disease. Salmon can be enjoyed in many different ways. Baked, broiled, smoked, or enjoy it as salmon cakes! It’s a fish that is commonly found on restaurant menus so if you’re intimidated to cook fish on your own, try out a salmon dish at a local restaurant for better brain health.

Eating avocados is a simple way to improve your cognitive abilities. And they can be enjoyed in so many different ways! Sliced up in tacos, as guacamole with chips, or added to thicken up your smoothie, these green fruits are powerful for brain health. Monounsaturated fats, lutein, and fiber can be found in avocados. The lutein in avocado is easily absorbed by the body, so it helps to increase the neural lutein levels. This increases working memory and focus. One study of older adults showed that  eating just one avocado per day improved attention span, memory, and efficacy in problem solving. So if you love avocados, keep eating them! And if you don’t eat enough, head to the store and grab a few to boost your cognitive performance.

The warm, comforting cup of morning coffee you enjoy is more than just a caffeine boost. The caffeine in coffee is what makes it so beneficial for brain health. Caffeine prevents a specific neurotransmitter known as adenosine from binding to receptors that promote sleep. So when adenosine is trying to make you tired, the caffeine blocks it from binding to your receptors to help you stay awake and alert by stimulating the central nervous system. Research shows that caffeine increases alertness and also improves performance on cognitive and reactive tasks. It also improved performance on tasks that required sustained attention and responsiveness. Overall, coffee is a great in-the-moment way to improve brain function and attention span.

Other nutrients in eggs, like B vitamins, are important for overall brain health, as well as brain functioning. B vitamins like B6 and B12 are crucial for brain function so eggs are a great way to maintain an adequate intake of the necessary B vitamins. Eggs can be enjoyed in so many different ways. Plain and scrambled for breakfast, or baked into your favorite muffin recipe, they are versatile and can be found everywhere. Increasing your cognitive performance is as easy as having breakfast!

This basic herb is full of flavor and full of medicinal properties. So really, it’s anything but basic! One of the active ingredients in rosemary—known as carnosic acid—functions as an antioxidant for the brain. This helps fight free radicals that can damage brain cells.

There is another ingredient in rosemary that is similar to carnosic acid, called carnosol. Carnosolfunctions as an antioxidant for the brain as well. With carnosic acid and carnosol working together, they reduce the oxidation of lipids in the brain. As you know, the brain is partly made up of fat. So these two antioxidants will protect the brain from neurodegeneration and allow it to function properly as you age!

The vegetable that looks like a mini tree is good for your brain function. Would you have guessed that? Broccoli is a standout in the veggie family. It has specific nutrients that are beneficial for the brain, including choline and vitamin K, which have been shown to strengthen both focus and memory. This mini tree green vegetable also has something called sulforophane, a sulfur-containing biomolecule that has powerful antioxidants and natural anti-inflammatory properties. Sulforophane not only protects again degeneration of the brain, but as one study found, it can actually stimulate neural stem cell proliferation and differentiation, which repairs brain cells! So head over to your local grocery store and grab some broccoli for dinner tonight!

Pumpkin seeds are an easy snack to grab daily that will greatly benefit your brain health. These humble seeds are good for brain health because they are so nutrient dense. One of the nutrients in pumpkin seeds, zinc, is important for the brain because it is crucial for the signaling of neurons and synaptic activity in the brain. If you are zinc deficient, those functions will slow down.

Another nutrient in pumpkin seeds, copper, is also important for the brain because it enhances neurotransmission and overall functioning of the brain. Pumpkin seeds also contain a lot of iron, which is absolutely necessary for all functions of the brain. Being deficient in iron will harm basic neuronal processes like thinking ability and focus. Grab a handful of pumpkin seeds every day so you can make sure you are providing your body with necessary nutrients that the brain needs for proper functioning!

So the next time you’re wondering how to improve brain function, pick up one of these common and easy-to-consume foods. If you are worried about your brain health or feel like your brain doesn’t function as well as you want it to, focus on including these 12 foods as often as possible in your diet!