by Deepak Chopra, M.D: A new medical breakthrough that is actually very old is known as controlled breathing… 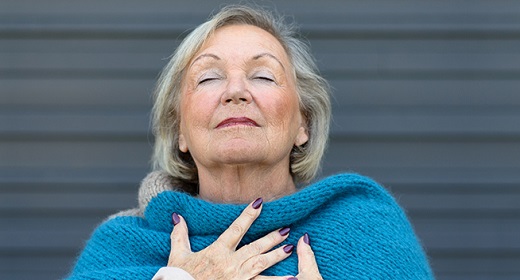 The practice is simple. You take a deep breath, feeling your lungs expand fully, then slowly exhale to a count of five. Repeating this practice four or five times sends a signal to the brain that creates a variety of beneficial responses.

As a recent article in the New York Times puts it, “Controlled breathing, like what you just practiced, has been shown to reduce stress, increase alertness, and boost your immune system.” Medically speaking, “Studies have found, for example, that breathing practices can help reduce symptoms associated with anxiety, insomnia, post-traumatic stress disorder, depression, and attention-deficit disorder.”

What Is Conscious (Controlled) Breathing?

A better term for controlled breathing is conscious breathing, which was advocated in Yoga thousands of years ago; whole books are devoted to the practices of Pranayama, the Sanskrit word for making the breath a conscious activity. In Vedic India, the whole point was to use breathing as an access to the life force, or Prana. In modern medicine, where the life force isn’t a recognized thing, the focus is on the central nervous system.

You can probably remember hearing someone say, “Slow down, take a deep breath, and calm down.” We say this to children who get over-excited, and in TV dramas it’s a standard line when a witness to a crime is so agitated that he or she can’t get his or her words out coherently. This relates to the difference between the mind-body system when it is relaxed and when it is stressed. If you breathe in at a rapid, shallow fashion or hold your breath without noticing it, you are exhibiting signs of stress. By consciously intervening with deep breaths, you cut off stressful breathing and return to normal breathing. This allows the autonomic nervous system to rebalance the body, and mentally you feel centered, relaxed, and more in control.

Conscious breathing is helpful in preparation for meditation since it grounds your awareness and puts the mind-body system into a more relaxed framework. The use of conscious breathing before you go to bed at night is also effective in preparing yourself for sleep. If you happen to do Yoga, various kinds of Pranayama are taught that have specific aims in application to deeper states of awareness.

The reason that conscious breathing is medically beneficial is linked to a common condition in modern life known as “sympathetic overdrive.” My coauthor Rudy Tanzi and I devoted a whole chapter to this in our book, The Healing Self. In essence, people don’t notice that they have gotten into chronic overdrive, which leads to low-level chronic inflammation and stress. These two conditions are moving to the forefront of medical explanations for serious lifestyle illnesses including heart disease, hypertension, and obesity along with the common mental disorders of depression and anxiety.

As we explain, without seeing the damage people are causing to themselves, most of us, the vast majority in fact, live in constant imbalance. The nervous system is the prime example of how your body operates under dual control. Any process that you don’t have to think about is handled by the autonomic nervous system, which was once referred to (somewhat inaccurately) as the involuntary nervous system. Essentially, the autonomic nervous system controls how organs function. The term “involuntary” once made perfect sense, because the nerves that control the heart, stomach, and digestive tract oversee functions that don’t need your voluntary or conscious cooperation. You can’t tell your heart to stop beating or your small intestine to stop digesting the food you eat.

But the idea that you have no control over the autonomic system is misleading because this side of the central nervous system turns out to be more adaptable to your wishes, feelings, thoughts, and other mental activity than anyone used to think. The autonomic nervous system is divided into two parts, known as the sympathetic and parasympathetic nervous system. (Again, the terms are a bit misleading since the word sympathetic isn’t being used in the same way as feeling sympathy for someone.) The basic function of the sympathetic nervous system is to deliver the fight-or-flight response. Even though the lower brain is the seat of fight-or-flight, it takes a whole network of nerves throughout the body, extending from the spinal cord, to activate everything that goes into this one response.

A great many elements are involved in the fight-or-flight response:

Being temporary, these are emergency measures only. Evolution didn’t equip you to react to stress constantly, but modern life has imposed it on you. The remarkable abilities of yogis and swamis to drastically slow down their heart rate and breathing for hours at a time is evidence of how fully you can take back control of so-called involuntary functions.

Conscious Breathing and the Vagus Nerve

Sometimes controlled breathing of the simple kind that you read about in the media is referred to as vagal breathing, because a critical role is played by the vagus nerve, one of the 10 cranial nerves that radiate from the brain to the rest of the body. The vagus nerve is a wanderer, tracing its course like the trunk line of an old-fashioned telephone system from brain to neck, down into the chest, past the heart, and extending into the abdomen. It is the longest cranial nerve, and its fibers both send and receive sensory information. Most of the sensations you experience when you do conscious breathing are channeled through the vagus nerve.

Because of its wandering, the vagus nerve has a holistic effect on the mind-body system, and as it responds to conscious breathing, this effect benefits distant processes like heartrate, blood pressure, and digestion, besides adding to the feeling of relaxed well-being. But modern medicine has a ways to go before realizing the most important thing: it isn’t the physical effects that create the benefits of controlled breathing or Pranayama.

The true benefits derive from consciousness interacting with itself in different modes. The two sides of the central nervous system are physical representations, symbols in bodily form, of two modes of consciousness. These two modes are constructs of the mind trying to understand itself. In reality, one consciousness controls both aspects of life, voluntary and involuntary. Nothing escapes consciousness because the body-mind is consciousness unfolding from its source in pure awareness to engage in the physical world. With that understanding, you can fit conscious breathing into your meditation practice as part of the larger goal, to reach full awareness and wake up to your infinite potential.