The Nobel Prize awardees in physics, beyond doubt, proved that the physical world is one big ocean of energy that materializes and dematerializes in a split second, over and over again… 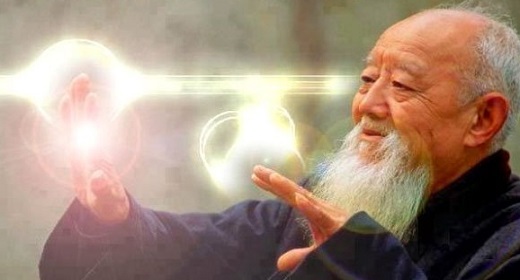 Nothing is solid. This is the world of quantum physics. They proved that thoughts are responsible for holding this ever changing energy field together in the form and shape of the objects we know. So why do we see a person, instead of flashing clusters of energy?

Think of a film roll. A film is a collection of about 24 frames per second. Each frame is separated from the other by a small space. Compared to the speed these frames change with, our eyes are tricked and see them as a continual film.

Think about television. The cathode tube is a simple tube with a bunch of electrons hitting the screen in a certain way, making an illusion of shape and movement.

Anyway, this is how all objects are made.

We have five physical senses (sight, hearing, touch, smell and taste). Each of these senses has a specific range (for an example, a dog hears a different range of sound than people do; snakes see a different spectrum of light than us, and so on). In other words, our senses perceive energy from a certain fixed point of view and that’s how they create images and form our perception.

But that’s neither exact nor complete. That’s just an INTERPRETATION.

All our interpretations are based exclusively on our “inner map” of reality, but not the real truth. Our “map” is the result of the collective experience of our personal lives.

Our thoughts are associated with this invisible energy and they determine what form it will take. They can literally change the universe “particle after particle”, creating our 3D life.

Everything you see in our physical world began as an idea which kept growing until it materialized into a physical object through a series of steps.

You literally turn into your most frequent thoughts.

Your life has become what you imagined and believed in.

The world is literally your mirror, allows you to experience everything you believe to be the truth in this 3D plane … until you change it.

Quantum physics tells us that the world is not a constant as it may appear to be. Instead, it is a place of a constant motion which our individual and collective thoughts keep building, tearing down, and rebuilding. It’s a perpetuum mobile.

What we believe to be true is actually an illusion, almost magic.

Fortunately, we started to expose the illusion and, most importantly, we are learning how to change it.

What are the components of our body?

We are just an energy light in its most beautiful and intelligent configuration. An energy which is constantly changing under the surface and all of that it’s controlled by our powerful mind.

You are one big and powerful human being.

If you could see under a strong electronic microscope and do other experiments on it, you would see that you are made up of clusters of forever changing energy in the shape of electrons, neutrons, photons and other sub-atomic particles.

So is everything else around you. Quantum physics tells us that the act of observing the object is the one that causes the object to be there.

The object does not exist independently of its observer! So, as you can see, during observation, your attention is focused on something and your intention literally creates that thing.

That is scientifically proven.

Your world is consisted of soul, mind and body.

Each of these three has a function that is unique. What you can see with your own eyes and experience with your own body is the physical world, which we call the BODY. The body is an effect created by a cause.

That cause is called THOUGHT.

The body cannot produce. It can only experience and be experienced … it’s a unique ability. On the other hand, the thought cannot experience … it can make, create and interpret. It needs a world of relativity (the physical world, Body) to be experienced.

The soul is everything, the one that gives life thought and body.