If Meditation Is Not Your Thing, Try A Walk In The Woods

by Karin Klein: Hiking is a near-perfect combination of elements known to relax us, raise our alertness, elevate our self-esteem, and physically prepare us for true rest afterward… 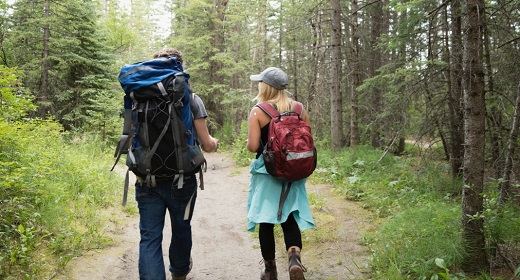 There are times when I don’t know what to do with myself. I feel at odds with the world, irritated by the people in it, in a funk about myself and what I’m achieving or, rather, not achieving, overwhelmed by the obstacles and complications of life. Happiness seems like an entirely elusive state of being.

At such moments, my friends know exactly what I should do. “When’s the last time you’ve been on a hike?” they inquire gently, and it’s time for a head smack. Of course, that’s the answer. I might not feel like pulling on my hiking boots; my mood is more in line with reclining on the couch and streaming Breaking Bad for the billionth time. But what I need is the trail.

To say that I return in a better mood would be damning nature with faint praise. I’m wholly restored, optimistic, energized, almost euphoric. I sleep soundly that night.

For a long time, hiking felt like my personal mental health elixir, a magical relationship just between me and nature. The truth is that I was experiencing phenomena well known to science. Hiking is a near-perfect combination of elements known to relax us, raise our alertness, elevate our self-esteem, and physically prepare us for true rest afterward. It exposes us to sunlight, outdoors, the color green, the sound of water, physical activity, social interaction. All of these have been shown in research to have beneficial effects on our mental well-being.

Me, I can’t meditate for shit. Sitting that long, paying attention to my breath or an imaginary white light, chafes my natural impatience. In contrast, hiking easily brings me to that sought-after state of being “in the moment.” Hikers pay attention to where they are and what’s going on. They have to, in order to avoid obstacles along the trail as well as such annoyances as poison oak and ivy. At the same time, the trail is a multisensory experience that calls on us to observe wildflowers, smell aromatic plants, and hear bird calls and the rustle of small animals in the brush.

These outings became such a strong return-to-sanity requirement for me that I trained to become a certified naturalist for my region’s wilderness parks and wrote a hiking book. Most people don’t go quite that far, but it’s an unusual newbie who doesn’t discover the restorative powers of the trail.

That’s not to say that hiking can cure serious mental illness. But research shows it’s a useful adjunct to other treatments for serious emotional conditions. For mild to moderate stress and depression, nature walks have time and again been found to boost mood and banish stress.

Science says it’s both the walking and the nature that make powerful medicine together.

Despite how cheap, helpful, and easy hiking is, access to nature itself can be uneven and downright difficult.

There’s plenty of evidence in favor of exercise, which improves mood and reduces anxiety, releasing endorphins and raising serotonin levels. But a 2016 study in the journal Mental Health and Physical Activity specifically found that bouts of outdoor exercise were significantly better at lifting the mood of people with mild to moderate depression than indoor activity. Previous studies found that so-called “green exercise”—and they didn’t mean golf courses—raised self-esteem, especially among those with mental illness.

Exposure to sunlight alone improves cognitive function, according to a 2009 study in the journal Environmental Health. For that matter, outdoor exercise has been shown to lead to more vigorous workouts; people walk faster and longer but perceive their workouts as easier.

Other aspects of nature have a calming rather than stimulating effect; studies have found that the colors green and blue—the hues that make up most nature scenery—are relaxing, as well as the sound of flowing water.

Despite how cheap, helpful, and easy hiking is, access to nature itself can be uneven and downright difficult. People living in dense urban areas are generally farther from the backcountry and might not have cars to get there. Low-income neighborhoods are less likely to have parks of any kind. These are often places where Black and Latino communities are located, so they are particularly affected. A 2011 report by the National Park Service found that non-Hispanic Whites were highly likely to visit the parks, while “African Americans and Hispanic Americans visited at the lowest rates.”

With reasonable care, a walk in nature is much more likely to help us than hurt.

Various groups are chipping away at barriers. Outdoor Afro facilitates outdoor access in the Black community. In Orange County, California, the Irvine Ranch Natural Landmarks, which provides free guided hikes on conservation lands, has begun offering some of them in Spanish. Latino Outdoors is a nonprofit dedicated to providing nature experiences for that community, and Disabled Sports USA helps people with physical challenges get out on the trail. An increasing number of parks offer wheelchair-accessible trails. And for anyone who lacks a group to join, many wilderness parks include docent-led tours to give you a safe introduction to the back country.

While not as meditative as a solo walk in the woods, these kinds of programs address another aspect of mental well-being. Group outings overcome reluctance to venturing in unfamiliar backcountry and appear to heighten the positive effects of nature walks.

A 2012 study found that such experiences could even help people with suicidal thoughts. “A group experience of regular monitored mountain hiking, organized as an add-on therapy to usual care, is associated with an improvement of hopelessness, depression, and suicide ideation in patients suffering from high-level suicide risk,” the authors concluded in their paper.

But endurance climbs over steep hills aren’t needed to reap the social and emotional up sides of gathering with others on the trail. According to a 2014 study in the journal Ecopsychology, group walks in nature were linked to significantly lower depression and stress, as well as an enhanced sense of mental well-being.

Of course, any kind of exercise can be taken to unhealthy extremes. And taking on physical challenges in the wilderness without the proper knowledge, equipment, or level of fitness can be downright perilous. Hiking alone or going off trail often gets people into life-threatening situations. But I’ve been hiking regularly for 20 years without that ever happening. The studies seem conclusive: With reasonable care, a walk in nature is much more likely to help us than hurt.

I’d be on the trail, anyway. But it’s good to know that science is on my side.