by Carol Kuruvilla: NASA renamed a West Virginia facility in her honor, 57 years after her calculations helped the first American orbit the Earth… 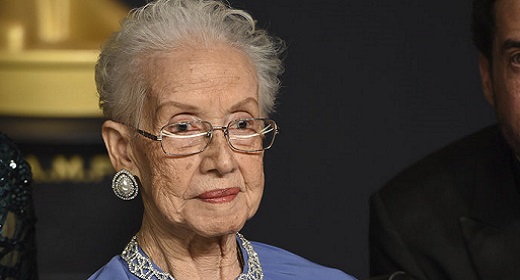 NASA on Friday officially renamed a West Virginia facility in honor of Katherine Johnson, an African-American mathematician whose work for NASA in the 1960s inspired the movie “Hidden Figures.”

The center is now known as the Katherine Johnson Independent Verification and Validation Facility.

Staff at the Fairmont facility are responsible for making sure the software on NASA’s high-profile missions runs safely and successfully, the center’s website states.

“I am thrilled we are honoring Katherine Johnson in this way as she is a true American icon who overcame incredible obstacles and inspired so many,” Bridenstine said in a statement on Friday.

This isn’t the first time Johnson’s name will appear on a NASA building. In 2017, NASA dedicated a newly opened building at the Langley Research Center in Hampton, Virginia, in Johnson’s honor.

A rededication ceremony for the West Virginia center will take place at a later date.

Johnson, a West Virginia native, was hired by the National Advisory Committee for Aeronautics (which later became NASA) in 1953. She was part of a team of African-American female mathematicians who manually performed complex calculations for the space agency at the Langley Research Center ― all while being largely segregated from their white colleagues.

Johnson went on to do trajectory analysis for America’s first human spaceflight in May 1961. She played a key role in crunching numbers for the orbital mission of John Glenn in 1962. Glenn was the first American to orbit the Earth.

Johnson was also part of a team that performed calculations for the 1969 Apollo 11 mission. That spaceflight landed Americans Neil Armstrong and Buzz Aldrin on the moon.

“At a time when racial segregation was prevalent throughout the southern United States, Johnson and fellow African American mathematicians Dorothy Vaughan and Mary Jackson ― who was later promoted to engineer ― broke through racial barriers to achieve success in their careers at NASA,” the space agency said in its statement on Friday.

Johnson retired from NASA in 1986. In 2015, President Barack Obama awarded her a Presidential Medal of Freedom.

Johnson’s extraordinary career was brought to life in the 2016 film “Hidden Figures,” which was based on a book by Margot Lee Shetterly. Actress Taraji P. Henson played Johnson in the film, which was nominated for three Oscars and two Golden Globes. It won a Screen Actors Guild Award for outstanding performance by a cast in a motion picture.

Johnson celebrated her 100th birthday in August. Her daughter, Joylette Hylick, told The New York Times her mother “remains in awe” about the honors she’s received.

Johnson “can’t imagine why people would want to honor her for just doing a good job,” Hylick told the newspaper on Friday.