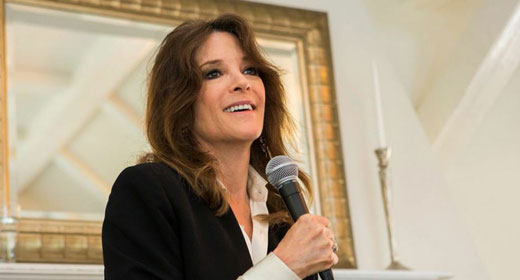 is virtually ensured a spot in the first series of Democratic debates next month.

Williamson has met both thresholds of the Democratic National Committee’s criteria for qualifying for the debates: polling and fundraising. That’s after a Monmouth University poll released Thursday showed her at 1 percent — the third poll to do so this year, meeting the DNC’s low bar for qualification.

Williamson, a friend of Oprah Winfrey and a spirituality guru, has centered her campaign on a theme of love.

“We have someone … [who] has harnessed fear, racism, bigotry, anti-Semitism, some of the worst faces of the human character for political purposes,” Williamson recently told Time magazine. “There is only one way to override that, and that is to harness love, decency, compassion, forgiveness, and mercy, love for each other and love for our country, and love for our unborn great grandchildren. We need to harness that for political purposes.”

According to Williamson’s campaign, she cleared the donation threshold earlier this month, receiving contributions from more than 65,000 donors, including more than 200 in at least 20 states.

By reaching 1 percent in a third poll, Williamson will almost certainly be among the candidates included in two back-to-back nights of debates held on June 26 and 27 in Miami. That’s because candidates who cross both the polling and grassroot donors threshold take priority over candidates who have crossed only one, and it is unlikely that more than 20 candidates hit both.

According to a POLITICO analysis, 19 candidates have met at least one threshold. Williamson joins Joe Biden, Cory Booker, Pete Buttigieg, Julián Castro, Tulsi Gabbard, Kamala Harris, Amy Klobuchar, Beto O’Rourke, Bernie Sanders, Elizabeth Warren and Andrew Yang in the group of candidates who have met both, all of whom are virtually guaranteed to make it to the first debate stage. A maximum of 20 candidates will be on the debate stage, with the field split randomly between the first and second night.

Williamson is one of the two outsider candidates basically ensured a spot on the debate stage, along with Yang. The inclusion could come at the possible expense of major officeholders who could be left off. Sen. Michael Bennet, Rep. Seth Moulton and New York Mayor Bill de Blasio, have not crossed either threshold, according to POLITICO’s analysis. Miramar, Fla., Mayor Wayne Messam and former Sen. Mike Gravel have also not hit either threshold.

The debates will be broadcast on NBC and Telemundo. They will also air on MSNBC.

In Thursday’s Monmouth poll, Biden leads the Democratic field, with 33 percent of Democrats and Democratic-leaning voters nationally saying he is their pick for the nomination. Sanders is in second with 15 percent, followed by Harris at 11 percent and Warren at 10 percent. Buttigieg is at 6 percent, the last candidate with at least 5 percent.

Biden, Harris and Warren all saw a slight bump in support compared with an April Monmouth poll, while Sanders and Buttigieg both saw small decreases. All the changes in support are within the poll’s margin of error.

The Monmouth University poll was conducted May 16-20, surveying 334 Democratic and Democratic-leaning independent voters. The margin of error is 5.4 percentage points.