The Difference Between A Good Risk And Bad One

by Ben Michaelis, Ph.D.:  A few years ago, a friend of mine, Jason, and I were in a business meeting with some executives at a large, well-respected company when one of the men across the table from us offhandedly called Jason “a risk taker.” 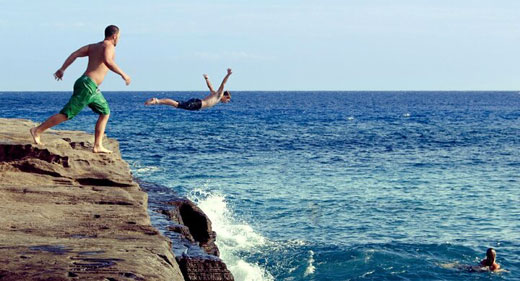 Jason asked him, “How am I a risk taker?”

The man responded defensively, “I mean you’re an entrepreneur. You are out there — trying things. Either you will succeed, or you will fail. That makes you a risk taker.”

“I don’t see it that way,” Jason said. “Between the two of us, I actually think that you are the bigger risk taker.”

If you are reading this article and feeling like things are not working out for you the way you want — in your job, your romantic life, your relationships to other people, or even your relationship to yourself — maybe it’s time for you to do something different and take a risk.

What’s that? You are not a risk taker? Why is that? Why has “risk” become a “four-letter word”? If it is for you, maybe it’s time to reconsider your relationship to risk.

The reason that people usually recoil at the idea of risk is that many of us are brought up in environments that avoid it. Families, schools, communities, and businesses are usually quite risk-averse. They try to maintain their equilibrium by changing very little or very slowly — and so they don’t want you messing up the works. Capiche? These systems often (though not always) preach about the evils of risk taking and, to be fair, some risk taking is harmful or “bad risk” — but not all. Most of us would agree that crossing a four-lane highway blindfolded in the dark, jumping out of a plane without a parachute, betting it all against “the house,” or trying to re-enact the more edgy Dave Chappelle routines during a job interview, are bad risks. These are the types of things that we generally think about when we think about risk (well maybe not the Dave Chappelle thing, but you get the idea).

But, these are not the only kind of risks. Just like there’s good debt (e.g., taking out a loan to send your kids to school) and bad debt (e.g., runaway credit card spending) there’s good risk and there’s bad risk — and this is what my friend Jason was trying to explain.

Most people don’t even think that there is another type of risk, but there is: Good risk involves listening to yourself, hearing and connecting with the part of you that is begging for expression but is being silenced because of a fear of rejection, embarrassment, or failure. It is listening to that voice inside of you that wants to do, or be, something more. Every single person has a part of them that is begging to get out — a message that they need to share, a long-forgotten skill or talent that has been lying dormant, abandoned in favor of less-risky pursuits.

Letting this part of you guide your path is what good risk is all about.

When you take good risks you either get what you want (you win) or you get the knowledge from the experience (you learn). Not taking good risks leaves you without either of these benefits that help you as you make your way in life.

So, go ahead, put a little (good) risk in your life. It will only make you stronger.