by Himanshu Joshi: A Kosha is a layer or a sheath. One of the teachings of the Upanishads is that there are five sheaths surroundings the self, the individual Consciousness… 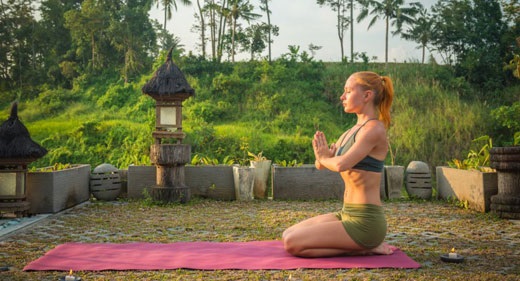 In the Tantric viewpoint, these layers are not simply maya (illusion). They are, yet again, another form that Consciousness has taken to see itself in a different way. The koshas move from the gross physical plane to the most subtle plane, each layer with its own qualities.

Anna means food. All of the physical aspects of life come and go and are consumed by another aspect of external reality. Thus, the outermost kosha is called the sheath of food, or annamaya kosha.

Proper diet, asana practice, and rest all contribute to optimal functioning of the physical body, the health of which influences our ability to become sensitive enough to experience the deepers layers.

Prana means energy. It is the vital force that force produces the subtle vibrations related to breath and is the driving force behind the physical aspect of the senses and the operation of the physical body.

For both a healthy life and practice, our prana needs to be smoothy regulated, utilizing the practice of Pranayama and asana.

Mana means mind. It is the level of processing thoughts and emotions. It is in direct control of the operation, through prana, of the physical body and senses, and organization of ideas. It is dependent on the previous sheaths for well-regulated energy (prana) and a healthy physical body. It functions clearly when connected to the deeper koshas that inform it.

Vijnana means knowing. It is the sheath of wisdom that is underneath the processing, thinking aspect of mind. It knows in a different way than manamaya kosha, embodying wisdom rather than mental acuity.

Anandamaya kosha is the most interior of the koshas, the first of the koshas surroundings the Atman, the eternal centre of consciousness. Ananda means bliss. However, it is not bliss as an emotion experienced at the level of the sheath of mind. Ananda is a different order of reality from that of the mind. The bliss experience here is said to be millions of times greater than our conditioned mind’s ability to grasp.

Atman is the self, the eternal centre of consciousness, which was never born and never dies. Like a pure light shining through various lampshades (koshas), Atman is the light itself, where subject and object (observed and observer) are seen as one.