This 3D-Printed Beehive Could Be Our Future Home On Mars

Erin Winick: A NASA competition to develop habitats for space missions is down to two finalists–and you could test out one of these designs… 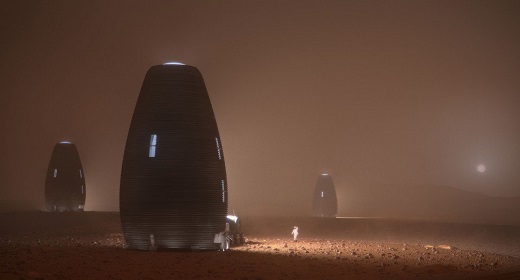 Since 2015, NASA has been running the 3D-Printed Habitat Challenge to do just that. Using just recyclable materials and what can be found on the moon, on Mars, and at other deep-space destinations, teams are competing to make a structure that is capable of supporting human missions. The designs could even translate into low-cost housing here on Earth, too.

Next week a winner will finally be crowned. In Peoria, Illinois, two teams will have just three days to 3D-print their designs on top of a gravel surface. AI SpaceFactory will be going head-to-head against Pennsylvania State University.

Before the former packed up its massive printing system, weighing more than 30,000 pounds (13,600 kilograms), to head off to the competition, I caught up with a member of the team in the Autodesk BUILD Space in Boston.

AI SpaceFactory plans to create its otherworldly structure using an extruder mounted on a robotic arm that sits on a forklift and carries about 3,000 pounds of material pellets. Much of the work the team had to do was figuring out how to control the arm properly and achieve the right properties for the structure. If the material is too hot or runny, it wouldn’t build up properly.

Although AI SpaceFactory has printed all the parts individually before, this competition will be the firm’s first time printing the entire thing at once. Despite that, the team members are hoping to intervene as little as possible: every time a human is needed to help out, the team gets penalized in the competition. Because if this were happening in space, of course, they wouldn’t be able to touch anything.

“The competition is centered around the pursuit of this holy grail of autonomy,” says team founder and space architect Jeffrey Montes.

AI SpaceFactory’s design looks like a tall, cylinder-shaped beehive, with gaps in which windows are placed in the sides and ceiling via robotic arm. The final touch is the skylight, after which the structure can be pressurized.

Although the team has been working on the design since 2017, construction of the printer and tests on how it prints the individual parts began only last year. See a video of the printing tests here.

Competing in the Habitat Challenge is no easy feat. That’s because much of the technology and resources for creating 3D printers and habitats like this is uncharted territory. A number of teams dropped out purely because they found it difficult to obtain the resources they needed. A third team actually qualified for the finals in Peoria but dropped out at the last minute.

“We knew that whoever won this challenge would basically be the top dog in this new field of space habitat construction,” says Montes.

If you want to test out what a future Martian home experience might be like, the firm expects to host Tera on a room-sharing platform such as Airbnb. It probably won’t be the height of luxury, but if you’re looking for a Martian camping trip, you may have found your next vacation. Sign me up.