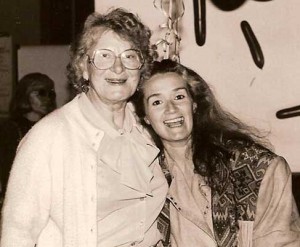 At 69, this philosopher/author/social worker/family therapist from Palo Alto has the reputation of being able to draw eager crowds virtually anywhere in the world–and then spontaneously to take those audiences into areas that no one, including herself, expected. She uses everything: questions, complaints, mistakes . . . even minor malfunctions like faulty microphones.

“Tell me what we’re supposed to do now.  You concocted the plan,” she suggested to her microphone adjuster at the Ambassador Hotel as he fumbled and poked around, trying feverishly to improve the sound coming from a tiny mike pinned to her blouse.

His next solution, a hand mike, clearly would not do. “My problem is I use two hands for talking,” she explained, warmly but firmly. “If I put the microphone there (in one hand) I limit myself this way . . . so we start out with handicaps.”

An improvised mike on a cord around her neck was equally unacceptable.

More fumbling. “If you hit this nerve back here on my neck, it’s going to give me a headache,” Satir warned, drawing laughter from her audience and beginning to sound more like Gracie Allen than the sort of teacher 600 Los Angeles area psychologists, psychiatrists and other mental health professionals paid to hear for an entire Saturday.

The microphone attendant continued to grope and adjust yet another mike on Satir’s grandmotherly, 5-foot, 10-inch frame. And she just kept enjoying the show.

“This is a good start for a seminar, I think,” Satir told her listeners, who were by now completely hooked on the unfolding microphone follies. ” . . . You realize you’re getting the whole seminar in these first few minutes . . . What we’ve done is shown how life is. Life is not the way it’s supposed to be. It’s the way it is. The way you cope with it is what makes the difference.”

Then Satir described some coping options she elected not to exercise. “I could have said to myself, ‘Well, if these people really were prepared, I wouldn’t have to go through with all this mishegoss (craziness).’ I would stand like that (rigidly) and then all my blood pressure would rise and we’d have a big fight and the other person would get nervous because he should have done better. . . . We could have done it that way and then all the negative vibrations would sweep over this room.

“Or, I could have thought to myself, ‘Ohhh, here it goes again. Same old thing,’ and been passive about it. And the vibrations would have come in relation to that.

This is how Virginia Satir often teaches. She uses whatever presents itself in a given moment as the perfect metaphor for a larger lesson on life.

Oh, she writes books, too. Her works, such as “Conjoint Family Therapy,” “Peoplemaking,” “Self Esteem,” “Making Contact” and “Satir Step-by-Step” are considered classics in family therapy literature and are frequently used as college texts. Not just in the United States but around the world (most of Satir’s works have been translated into 15 languages).

But those familiar with Satir’s books sometimes point out–as a compliment–that they are but pale reflections of her presence, of her abilities to work with people. They further note that her intuitive, heart-over-head approach is not easily expressed in anything as limiting as words.

Even Satir’s book editor, David Hinds of Celestial Arts Publishing in Berkeley, says, “I almost refuse to even discuss Virginia with people who haven’t seen her work in person. The rapport she establishes with the audience–even large audiences of a couple of thousand people–is incredible.”

While Satir’s methods may not be easily conceptualized or categorized, they do produce results. And there were plenty of them throughout the daylong workshop co-sponsored by the Glendale Humanistic Psychology Center and the California Hispanic Psychological Assn.

Consider, for instance, a man who supervises adolescent boys at an unnamed institution. He told Satir he didn’t know whether to take a nice-guy approach or a tough, drill-sergeant stance.

He said that after being nice (ignoring the boys’ negative behavior and reinforcing only the good) he was labeled “the easy guy”–and the negative behavior continued. So he adopted a tough approach, which instilled fear in the boys but only worked temporarily–if he “got nasty enough.”

Satir suggested the supervisor consider adding a third string to his bow. But she didn’t tell him what that string might be. Instead she deftly led him to discover it for himself.

“What you’re telling me is that you can’t ignore the negative behavior that you see. Ignoring it doesn’t work because they think, ‘Doesn’t he see? What’s the matter with him?’ ” she said, checking to be sure she had sized up the problem accurately. “You’re trying to find ways to help these kids stand on their own feet and now one of the ways you’ve worked out is to say, ‘Damn it, stop that.’ ”

Then, Satir wanted to know how the man’s father had dealt with him in situations like those he faced with the boys.

On learning the father had been the powerful, tough-guy type, she immediately assumed the role of the man’s father and chastised him for not being good enough.

“What happened inside of you?” she asked the man, whom she had instructed to kneel down so he could have the same perspective as a child.

He felt himself sinking down into the floor, he said, shriveling up to nothing. “I ran away and avoided him,” he recalled as tears came to his eyes.

“I don’t believe your father wanted to hurt you. . . . I believe he didn’t know how to help you do what you wanted to do,” Satir told the man. “These boys could have the same reaction to you as you did to your father.”

Next, Satir asked if there were ever any times when the man’s father had really gotten through to him. The man remembered a time when the two had talked deeply–after his father hit him and then came to talk with him afterwards–and how good the connection made him feel.

“You could join with him on that because you and he got to your respective humanness,” Satir pointed out. “When you came up here to ask your question, you thought there was no way to keep those boys in line. I could almost hear your (drill sergeant’s) fingers snapping. What new possibilities do you see now?” “I think taking the time to sit down with the boys and connect with them and let them know I’m not just a drill sergeant will work,” he replied, obviously relieved.

Added Satir: “These boys, I can tell you ahead of time, one of the things they’re trying so hard to do is get a sense that they are valued. And the way they do it is the best they know–tricking you, being sneaky, being competitive, these are ways we’ve forced people to learn. But if I’ve learned anything in working with families for 40 years, children are only learning what they see modeled.”

And she insisted that one moment of “straight, clean and connected” communication would form the foundation for the next moment, and that for the next.

“That’s how it is,” she said flatly. “And clean doesn’t mean rosy rosy–it means how it is.”

But the case of the drill sergeant and the wayward boys was no isolated example. As Satir saw it, this is a nearly universal issue for parents and children–and for any teacher or student enrolled in the “do-it-or-else school” of life.

“Have you ever seen kids who get yelled at all the time? They absolutely pay no attention. They ignore everything and fight back. Or they eat crow and say, ‘I won’t do it again.’ Or they act crazy and hope that will take the parents off (their backs),” Satir emphasized.

“In that (case), will a child be able to do what he needs to do or say? And do you get the opportunity to say how you feel?”

For Satir, connecting with others and empowering them to express themselves truthfully is basic to all situations. In each question or comment she addressed throughout the day, many variations on this principle were stressed.

And as Satir practiced what she preached with each person who stepped on stage with her, problem after seemingly impossible problem was swiftly cleared up.

Some therapists were so moved by her instruction and her example, they broke into tears almost the moment they stepped on stage with her.

During breaks and when the workshop concluded, long lines formed around her. People wanted to tell her how much they appreciated her, to ask her to sign a book or to receive a hug.

She obliged them all, using every opportunity to make connections with all who wanted to make them with her. It seemed to be her personal antidote to the “game of civilization” that she feels most people play.

She had defined that game earlier in the day and talked about its two main rules: “You don’t bother anybody. You look happy while you’re not (bothering people).”

Now everyone who is playing the game feels safe, Satir said. “Now try to look happy. This is the way most of us go through the world.”

If you could judge by the looks on people’s faces as they left Satir’s workshop, most of them appeared to be in search of an alternate route.