50 Years Ago: John Lennon And Yoko Ono Bed In

by Dave Lifton: Most newlyweds like to spend their first few days as a couple far away from their hometown in some exotic locale, isolated from the rest of the world… 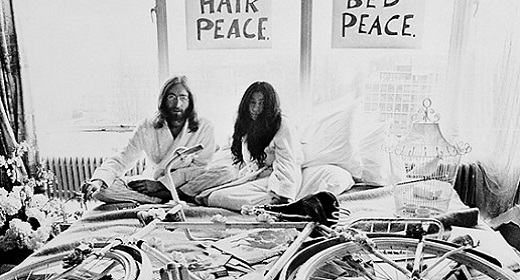 Then again, most couples weren’t John Lennon and Yoko Ono, whose honeymoon was a week-long “Bed-In for Peace” that began on March 25, 1969.

Following their wedding five days earlier, John and Yoko holed up in the presidential suite at the Hilton Amsterdam, which they had decorated with hand-drawn signs above their bed reading “Hair Peace” and “Bed Peace.” They invited the global press into their room to discuss peace for 12 hours every day.

“We sent out a card: ‘Come to John and Yoko’s honeymoon: a bed-in, Amsterdam Hotel,'” Lennon said in Anthology. “You should have seen the faces on the reporters and the cameramen fighting their way through the door! Because whatever it is, is in people’s minds – their minds were full of what they thought was going to happen. They fought their way in, and their faces dropped.

“There were we like two angels in bed, with flowers all around us, and peace and love on our heads,” he continued. “We were fully clothed; the bed was just an accessory. We were wearing pyjamas, but they don’t look much different from day clothes – nothing showing.”

Their choice of city to stage their event and get their message across was not random. As Ono said to a reporter, “We thought that Amsterdam was a very important place to do it, because it has a very fresh and alive interest. And we’re thinking that, instead of going out and fight and make war or something like that, we should just stay in bed: Everybody should just stay in bed and enjoy the spring.”

Lennon hailed the setting. “It’s a beautiful place,” he told the Dutch press. “And Amsterdam is a place where a lot of things happen with the youth … The more peaceful are the ideas that the youth have, and if we have any influence on youth at all, we’d like to influence them in a peaceful way.”

While the idea of sitting in bed for a week and letting your hair grow for peace remains undoubtedly silly, the couple admitted the absurdity was part of the plan. “A little old lady from Wigan or Hull wrote to the Daily Mirror asking if they could put Yoko and myself on the front page more often,” Lennon said in Anthology. “She said she hadn’t laughed so much for ages. That’s great, that’s what we wanted.”

The suite where Lennon and Ono staged the bed-in is now marketed as the John and Yoko Suite, and decorated with memorabilia. It can be rented for $2,400 a night.

Two months later, Lennon and Ono staged a second bed-in at the Queen Elizabeth Hotel in Montreal. They recorded “Give Peace a Chance” with a handful of invited guests. Several years ago, Ono released their footage of both bed-ins as a 70-minute documentary called Bed Peace, which you can watch above.