Ai Weiwei: The Artwork That Made Me The Most Dangerous Person In China

by Ai Weiwei: I trained as an artist in New York, but I never really knew how my art would function in the so-called art world… 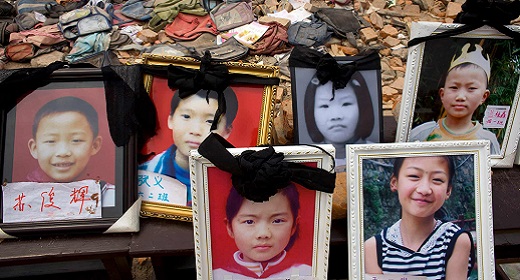 I didn’t feel part of it and nobody was interested in me. Then in 2008, after I had moved back to China, Sichuan had an earthquake.

It was devastating: more than 80,000 lives disappeared. Many of the dead were young people at school and university. I’d been writing a daily blog – about modern Chinese society, the government and art – but I stopped suddenly. People asked me why but, faced with such a tragedy, I was silenced. I couldn’t find the right vocabulary.

The Chinese government censored and controlled all of the information about the earthquake, so people didn’t know the details of what really happened. I wanted to know how many students had lost their lives. Schools built by the state are supposed to be very secure – they should not collapse. I made hundreds of phone calls to the education department, the police and civil departments, to ask questions about the student casualties, but of course nobody would talk to me.

So I used the internet to set up a citizen investigation team. On my blog, I said: “This is my question: Where are those lives?” A lot of young people began following me intensively online and we soon had a team of 100 people. We went out to the crisis area, to the ruins of the earthquake. We knocked on doors around the villages and met victims’ parents. The information we requested was simple: names, dates of birth, the schools the children lost their lives at. We asked our team to record all the details they were given in diaries when they were in the disaster areas – just very plain language with no emotion.

After a year of knocking on doors, we had the names of 5,219 children who had died

Over the months, members of our team were arrested many times. Police would confiscate their belongings, delete the names they’d written down and erase photos. But we stayed determined and sent new people in. After almost a year of research, we had 5,219 names. Eventually, the government shut off the blog because there were too many people reading it and following us. This made me increasingly conscious of social and political issues relating to the internet.

I had a show coming up in Munich and decided to cover the Haus der Kunst museum’s facade with one sentence from a victim’s mother. She had written to me: “All I want is to let the world remember she had been living happily for seven years.” This beautiful little girl was just the same as any other: she liked to dance, to sing. But suddenly – because of the negligence of the government, the corruption in construction – there wasn’t a safe building for her to go to school in.

The work was called Remembering. Given all our social and political investigations, it was about how, in Chinese society, with censorship and control, individuals can still take action to defend their very, very fragile rights. It was also the culmination of all my years on the internet. I’ve been blogging since 2005, so when that show happened in Munich in 2009, it was like all my efforts were coming to a head. Not long after, I was put in jail and had all kinds of struggles with authority. Remembering was a high point.

The kind of authoritarian state we have in China cannot survive if it answers questions – if the truth is revealed, they are finished. So they started to think of me as the most dangerous person in China. That made me become an artist, but also an activist. So for Remembering, I covered the whole of the Haus der Kunst’s facade with children’s backpacks, spelling out in Chinese what that mother had told me. The design and the colours were inspired by Toys R Us.

The Haus der Kunst is a historical building. The architects made it especially for Hitler. They all knew he loved art but had never been accepted as an artist. He criticised any work he considered “degenerate” – any abstraction or early examples of surrealism. So to cover that museum’s facade was a very political act, a very dramatic act. It took 9,000 student backpacks to construct that sentence.

Of course, there is a front door to the museum, so people had to pass right through this sentence. They didn’t understand the Chinese writing, so it forced them to find out, to learn, to read about the show. Munich is a city full of art lovers and collectors and it became very popular.

I have made many other works relating to the Sichuan earthquake, but this one had a profound impact on how I deal with social and political issues. It’s about a real-life tragedy, the human condition, civil rights – an embodiment of my passion and imagination. If I hadn’t engaged with that tragedy, I would not be the artist I am today. I cannot imagine I’d still be making art if I wasn’t reflecting my political views.

I am interested in ideas, how to conceptualise them, create a language and find possibilities. Those matter to me more than the final object. My work is about my life, my consciousness, my sensitivity and my skill in dealing with different matters. This was especially true of Remembering, which had a huge impact on my subsequent output.

Sometimes when I make an artwork, it requires all those things. It requires my life. This is quite a responsibility. It can be unpredictable and dangerous. If you cut into a tree and look at its rings, you can see certain years have left more of a mark in the wood. That’s what the Sichuan earthquake did to me.