Georgetown Students Vote On Reparations For The Descendants Of Slaves

by Susan Svrluga: Georgetown University student activists are pushing to create a reparations fund for the descendants of slaves… 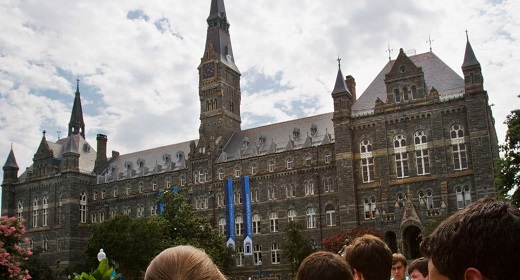 one that would use a student fee to send a message that historical wrongs will not be forgotten — and to prod administrators to move more quickly on what students call a fundamental moral question.

“We’re setting the example for others to step up — not just our university, but universities across the country, to save history,” said Shepard Thomas, a junior from Louisiana who is a direct descendant of enslaved people, the sale of whom helped save Georgetown from bankruptcy.

The effort to create a fund — and a campus vote on the proposal — emerge as matters of race are being fiercely debated nationally, with some Democratic presidential hopefuls embracing reparations as a way of righting past injustices.

Georgetown isn’t the only institution grappling with its past. At a growing number of schools, scholars have delved into the more fraught aspects of their universities’ histories, and administrators have acknowledged the roles their institutions played in the horrors of slavery and its lasting legacy.

When the Class of 2019 arrived at Georgetown, the university was making national headlines for acknowledging its historical ties to the slave trade and pledging to make amends.

“We watched the university do all these ceremonies, publish reports, make suggestions, create a spectacle that made people feel like something was going to happen,” said Karla Leyja, a senior from Houston. But as time went on, she said, the issue seemed to fade: Last year, when Leyja would mention the school’s history and the 19th-century sale of hundreds of enslaved people, she would be met with blank stares.

It was that shift, from a sense of urgency to something more like apathy, that drove student activists to take action.

And that led to the proposal for the reparations fund. Undergraduates voted on the proposalThursday, with results expected Friday. The measure is not binding, but if it passes, it will send a strong message. Student activists said they hope the university’s board of directors will discuss the issue at its spring meeting.

“As students at an elite institution, we recognize the great privileges we have been given, and wish to at least partially repay our debts to those families whose involuntary sacrifices made these privileges possible,” the sponsors wrote in the referendum. “As individuals with moral imagination, we choose to do more than simply recognize the past — we resolve to change our future.”

They proposed a student fee to begin in fall 2020 of $27.20 per semester. It would raise an estimated $400,000 the first year and increase with inflation. A nonprofit organization led by a board of students and descendants would donate money to charitable causes directly benefiting descendants of the 19th-century sale of enslaved people.

“We value the engagement of our students and appreciate that they are making their voices heard and contributing to an important national conversation,” Todd Olson, vice president for student affairs at Georgetown, said in a written statement. “The Descendant Community, the Society of Jesus, and Georgetown are working together towards reconciliation and transformation regarding the legacy of slavery.”

Georgia Goslee, legal counsel for 200 of the descendants, said, “We think it’s amazing the students would take this on.”

She said the descendants she represents are hoping for a favorable vote that would encourage the university to do more than just talk and study the history, “and transfer some of that wealth to the descendants. . . . How Georgetown can continue in good faith to reap the financial benefits on the backs of slaves is unbelievable.”

In 1838, two priests who served as presidents of Georgetown orchestrated the sale of 272 men, women and children enslaved by Maryland Jesuits.

The $115,000 sale, worth more than $3 million today, resolved debt at the Jesuit school at a critical moment in its history.

It also broke apart families and sent many to Louisiana, where they labored under dreadful conditions on cotton and sugar plantations.

That history had been known for decades when students and others pushed it to the fore in recent years. Since 2015, the university has offered a formal apology, renamed buildings and given descendants an advantage in admissions.

Research continues — just the other day, someone unearthed an ad for a runaway slave believed to be one of the people sold by the Jesuits, said Adam Rothman, a history professor at Georgetown.

Change is evident in the ways people talk about slave ownership and its legacy on campus, said Marcia Chatelain, an associate professor of history and African American studies and a member of the Working Group on Slavery, Memory, and Reconciliation.

But students are anxious to see signs that the history will continue to inform the future of the university, she added.

“The Georgetown community is at a pivotal moment,” said Rothman, “when the memory of this history could be sort of lost again — could fade away.”

While students such as Thomas and many others were texting and messaging friends urging them to support the referendum on Thursday, others were passing out pamphlets urging students to vote against the measure.

Opposition was varied and included a philosophical disagreement over the idea that people of the present should bear the burden for transgressions of the past.

Some saw the contribution as too small — as tokenism.

Many were concerned about the proposed student contribution.

Two student government leaders wrote in the Hoya, a student newspaper, that students should not have to pay for the institution’s failures.

“Georgetown University alone, not the student body, has the obligation to pay for its past transgressions,” Hayley Grande and Samuel Dubke wrote. They implored students to vote against the referendum, arguing it would adversely impact students from low-income families and could set a dangerous precedent: “We cannot demand students self-fund every project Georgetown fails to deliver.”

As people debated the referendum on campus Thursday, Rothman said, “Whatever side they’re on, I just really want them to learn the history and absorb it — think about what it means to them.”