by Chris Ip: How a burger maker became a “platform…” 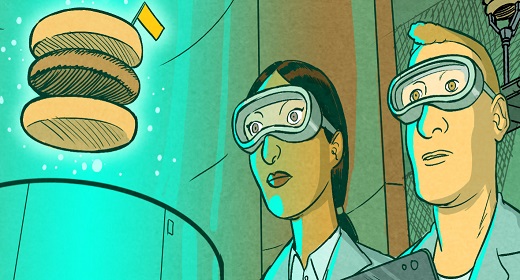 his April Fools’ Day, Impossible Foods was behind a prank video. Customers in a St Louis branch of Burger King were surreptitiously filmed eating the restaurant’s flagship Whopper. First they rhapsodized about their love for beef. Then they were told they’d just eaten a plant-based Impossible Burger.

“It’s made of fucking beef right here, you see that?” one customer told the camera — expletive bleeped out — peeling back his sandwich to reveal the monochrome disc beneath. “That’s impossible. It tasted just like a Whopper should taste,” said another. Cue close-ups of flames, blackened grills and fat-spitting patties.

The minute-long video announced Impossible’s biggest partnership yet: a Burger King Whopper made of plant-based meat that sells for $1 more than a regular one. The deal is a stamp of approval from fast food royalty that will eventually insert Impossible’s vegan patty right into mainstream America’s daily dietary choices.

I’ve eaten Impossible meat in gua baos, salad bowls, Lebanese kafta and White Castle sliders. I’m mostly astounded at how plausibly generic it is, how unobtrusively it replaces the ketchup-and-plastic-cheese-smothered slice of gray that usually resides within a fast food bun. How enough heavy spicing or dousing in sauce could sneak an Impossible product past my taste buds, perhaps to be called out in a semi-viral moment of my own.

Tasted without accompaniments, the product has a convincing chew and toasty burnt edges but a hollow savoriness at the core. As a meat eater, I would not crave Impossible meat. If I craved a burger, though, this could go part of the way to satisfying the urge. Note that in the Burger King video, the customers’ astoundment hits not when they taste the burger but when they realize they couldn’t tell the difference.

This is what’s revolutionary about Impossible’s burger — not that it’s the best you’ve ever tasted but that finally there’s a viable, inoffensive alternative for meat that you can find at a drive-through for less than $6.

In the trillion-dollar market for meat, inoffensive is a paradigm shift. Veggie burgers have existed in the US since the 1980s; mock meats made by Chinese Buddhists date back to the seventh century. But most meat proxies have historically either not tasted like the real thing or not aspired to.

In the trillion-dollar market for meat, inoffensive is a paradigm shift.

We’re in a new era of food tech: ahi tuna sashimi made from tomatoes, lab-grown foie gras. Greggs, the UK everyman’s bakery, has made a wildly hyped vegan sausage roll, and in 2013 Dutch scientist Mark Post showed off a $325,000 cell-based burger paid for by Google’s Sergey Brin. Nestle, McDonald’s and Tyson, the US’ largest meat processor, are all set to debut alternative proteins.

These products don’t aim to resemble the ascetic formlessness of health foods that trade taste for moral rectitude. But neither are they the soulless nutrition-delivery systems of Soylent and RX bars that trade it for efficiency. The problem with most future-of-food plays is how hard it is to feel any emotion about them. No matter how optimized they are, they’re insipid on a sensory level: As Topic wrote about energy bars, “consuming them doesn’t satisfy hunger so much as deaden it.” These new meat facsimiles aspire to be good enough on flavor, health, price and ethics, proposing the outcome we seldom get in life: Why choose?

Burgers are a good place to start. Americans eat three of them on average per week, and last year they were estimated to consume more than 200 pounds of meat per capita. The US is both the largest global producer and consumer of beef.

Leading the wave are two companies. One is Beyond Meat. Founded in 2009, it makes burgers and sausage links from pea, rice and fava protein. It’s in Carl’s Jr — the chain once known for its leering Super Bowl ads — as well as Whole Foods. The company went public this month, its share price shooting up 163 percent on its first day for a current valuation of around $5 billion, the biggest IPO of the year so far.

“If farmers and ranchers think we can mock and dismiss these products as a passing fad, we’re kidding ourselves.”

Beyond was first to the grocery stores, first to sell multiple meat products and first to the Nasdaq. But Impossible has arguably the greater soft power based on something simpler: It tastes more like animal meat.

In a public relations coup, even the Missouri Farm Bureau, an agriculture advocacy group in America’s heartland, thinks the Impossible Whopper is a leap forward for the competition. “If I didn’t know what I was eating, I would have no idea it was not beef,” wrote Eric Bohl, the group’s director of Public Affairs and Advocacy. “If farmers and ranchers think we can mock and dismiss these products as a passing fad, we’re kidding ourselves. This is not just another disgusting tofu burger that only a dedicated hippie could convince himself to eat. It’s 95 percent of the way there, and the recipe is likely to only get better. Farmers and ranchers need to take notice and get ready to compete.”

Now Impossible counts Jay-Z, Bill Gates and Serena Williams among its investors while other rising food disruptors market themselves as the “Impossible of dairy.”

Impossible wants 2019 to be its breakout year. It is about to launch a new sausage product, the first expansion beyond ground beef. The company landed in Singapore this March, following its Hong Kong and Macau releases last year. It aims to be in both grocery stores and Burger King locations nationwide by December (beyond St Louis, the burger is currently available in Miami; Columbus, Georgia; and Montgomery, Alabama). And the company just announced a new $300 million funding round, putting its total capital raised at $750 million for, according toReuters sources, a valuation of $2 billion.

Impossible says it wants to ultimately create a parallel universe of ersatz animal products from steak to eggs. “The primary goal is to effectively eliminate the use of animals in the food system,” founder and CEO Pat Brown told me. Yet as Impossible ventures deeper into the culinary uncanny valley, it also needs society to discard a fundamental cultural idea that dates back millennia and accept a new truth: Meat doesn’t have to come from animals.