by Leila Salazar-Lopez: Following a two-week visit to Ecuador, I return inspired and recommitted to our work to defend the Amazon and the rights of indigenous people… 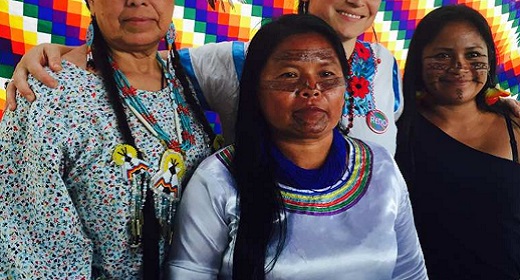 In particular, I am filled with hope by the alliance of indigenous Amazonian women from across the southern Ecuadorian Amazon who came together in a historic march in defense of the Amazon, Mother Earth and Climate Justice on International Women’s Day, March 8th.

It was the first time ever that indigenous Amazonian women from seven nationalities, including the Kichwa, Sápara, Shiwiar, Shuar, Achuar, Andoa, and Waorani, joined forces and marched together in defense of their rights, rainforests and future generations. They came from remote rainforest communities, local towns and provinces by foot, canoe, bus and plane to denounce a newly signed oil contract between the Ecuadorian government and Chinese oil corporation Andes Petroleum for blocks 79 and 83, which includes parts of the indigenous territories of the Sápara, Shiwiar and the Kichwa of Sarayaku, Pacayaku, Teresamama along the Bobonaza and Curaray River Basins. Contrary to Ecuadorian and international laws, they were not consulted and did not give their consent for any oil operations on their territories and have vowed to defend their rainforest homes and cultures.

Indigenous Amazonian women released a statement and call-to-action in early February stating, “We reject the signing of this contract which will affect our territories, the forest, the water, and the air; exactly how we have seen it occur in Block 10 in the Province of Pastaza. This is where serious social and environmental impacts have been generated, where women are the main victims and their ability to feed their families becomes impaired. There is deterioration of family health, and they suffer the division of their communities and other forms of violence.”

In a time when governments and oil companies have created divisions among leaders, communities and nationalities, the unity of women is an encouraging demonstration of peaceful resistance and positive solutions. Ena Santi, Director of Women’s Affairs for the Kichwa of Sarayaku, mother of ten, and primary organizer of the March and Forum on International Women’s Day, said:

“For me, it was a great sacrifice. I had to leave my children and my community for many weeks to visit communities to invite and encourage the women to come to Puyo to march. Some women could not believe they were being invited, but I reassured them that we needed to come together to defend our rights, our forests and our children. In early February, I estimated that 120 women would join us. In late February, that estimate grew to 240 as the word about the march spread. Then, in the days leading up to the march, I realized that over 500 women would be joining us from across the southern Amazon, from the Curaray and Bobonaza river basins, and from surrounding villages and towns. I realized that our vision for the formation of an Amazonian Women’s Alliance was becoming a reality.”

On the morning of March 8th, indigenous women from across the southern Amazon gathered at a local school in Puyo for a welcoming ceremony led by Casey Camp Horinek, Ponca elder from North America, and a forum on indigenous territories, climate change and criminalization prior to the march. They were joined in solidarity by indigenous allies from CONFENIAE and CONAIE, as well as NGO allies from Fundación Pachamama, Acción Ecológica, Oilwatch and academics from universities including FLACSO in Quito. They were also joined by representatives of international organizations including Amazon Watch, WECAN and Land is Life.

We all listened attentively to the words, calls and songs of the Amazonian women as they shared their messages and visions for a future without oil drilling and destruction…a livable future where rainforests, rivers and rights not only survive, but thrive. I recall the words of Nancy Santi, President of the Kawsak Sacha Women’s Association, who had recently traveled with a Saramanta Warmikuna (Sisters of the Corn) delegation of 20 women to very remote communities bordering the “Intangible Zone” and Yasuni National Park. She said, “We are here so that you all know that we are also affected by this new oil contract. The government is trying to enter and divide our communities with oil. We cannot let this happen to us or to the isolated peoples. It would be genocide! We have to unite!”

Then, over 500 indigenous Amazonian women and their allies, including male leaders of the indigenous federations, marched through the streets of Puyo for nearly two hours. They held signs, banners and their children in their arms under the blazing sun and pouring rain. They chanted, “Que Queremos? Nuestros Derechos y Nuestros Territorios! Selva Viviente!” or “What do we want? Our Rights and Territories! Living Forests!” They sang, danced and drummed until reaching the Plaza Mexico for a culminating rally where indigenous women leaders were invited, once again, to share their concerns, calls and songs.

Alicia Cahuiya, Vice President of the Waorani Nationality, and her Waorani sisters shared a song passed on by their grandmothers. Alicia explained after, “This is a song of the leafcutter ants and how women are like them because we work hard like them. We do double the work. We take care of our children, we cook, we gather yuca and ancestral medicine. And because it is a special day for women, we shared this song of our ancestors…a song that our ancestors learned from the spirits of the forest. It doesn’t matter what nationality you are. If you are a woman, if you are a defender of life, you deserve to hear this song because you share our suffering and our commitment to defend our ancestral territories.”

As the guest of honor, Casey Camp-Horinek, was asked to say the final words and prayer. She expressed how humbled she was to be invited to share her thoughts and concerns about the impacts of the fossil fuel industry in Ponca Nation where thousands of earthquakes have shook the land this year alone due to fracking. She also shared prayers and a song to express her solidarity with the indigenous women of the Amazon. It was a beautiful expression of the power of solidarity amongst indigenous women of the north and south and the power of women around the world. It was a new moon and a day to remember the “Indigenous Women’s Treaty of the Americas in Defense of Mother Earth,” signed in September 2105 on Lanape Territory, also known as Central Park in the heart of New York City.

I am so honored to have shared this special and historic day with our brave and powerful Amazonian sisters. I am proud to have marched with them and am ever-committed to continue supporting them as their plans develop to build their Women’s Alliance in the Amazon. I want to thank all who were with us physically and in spirit Puyo. I want to thank all who took action at the Chinese consulate in San Francisco, CA and those who called Chinese embassies around the world. For the sake of climate justice and cultural survival, please continue to take action in solidarity with the Sápara, Sarayaku and all of the people and living forests threatened by new oil drilling plans in the Amazon.

As our friend and ally Patricia Gualinga, Kichwa leader from Sarayaku, says, “It is our survival, but your survival depends on ours.” So let’s unite to Defend the Amazon, Mother Earth and Climate Justice by keeping fossil fuels in the ground!