by Margaret Mitchell: Freedom is not given to us by anyone; we have to cultivate it ourselves. It is a daily practice. No one can prevent you from being aware of each step you take or each breath in and breath out… 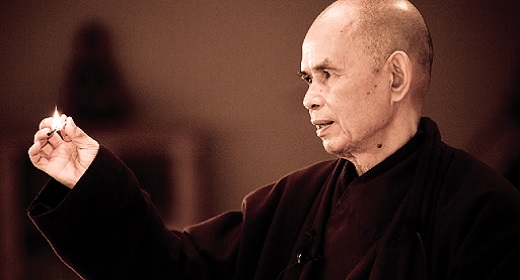 “I do not personally know of anyone more worthy of this prize than this gentle monk from Vietnam. He is an Apostle of Peace and Nonviolence. His ideas for peace, if applied, would build a monument to ecumenism, to world brotherhood, to humanity.”

This would be a notably auspicious year for you to bestow your Prize on the Venerable Nhat Hanh. Here is an apostle of peace and non-violence, cruelly separated from his own people while they are oppressed by a vicious war which has grown to threaten the sanity and security of the entire world.

Because no honor is more respected than the Nobel Peace Prize, conferring the Prize on Nhat Hanh would itself be a most generous act of peace. It would remind all nations that men of good will stand ready to lead warring elements out of an abyss of hatred and destruction. It would re-awaken men to the teaching of beauty and love found in peace. It would help to revive hopes for a new order of justice and harmony.

I know Thich Nhat Hanh, and am privileged to call him my friend. Let me share with you some things I know about him.

You will find in this single human being an awesome range of abilities and interests.

He is a holy man, for he is humble and devout. He is a scholar of immense intellectual capacity. The author of ten published volumes, he is also a poet of superb clarity and human compassion. His academic discipline is the Philosophy of Religion, of which he is Professor at Van Hanh, the Buddhist University he helped found in Saigon. He directs the Institute for Social Studies at this University. This amazing man also is editor of Thien My, an influential Buddhist weekly publication. And he is Director of Youth for Social Service, a Vietnamese institution which trains young people for the peaceable rehabilitation of their country.

Thich Nhat Hanh today is virtually homeless and stateless. If he were to return to Vietnam, which he passionately wishes to do, his life would be in great peril. He is the victim of a particularly brutal exile because he proposes to carry his advocacy of peace to his own people. What a tragic commentary this is on the existing situation in Vietnam and those who perpetuate it.

The history of Vietnam is filled with chapters of exploitation by outside powers and corrupted men of wealth, until even now the Vietnamese are harshly ruled, ill-fed, poorly housed, and burdened by all the hardships and terrors of modern warfare.

Thich Nhat Hanh offers a way out of this nightmare, a solution acceptable to rational leaders. He has traveled the world, counseling statesmen, religious leaders, scholars and writers, and enlisting their support. His ideas for peace, if applied, would build a monument to ecumenism, to world brotherhood, to humanity.

I respectfully recommend to you that you invest his cause with the acknowledged grandeur of the Nobel Peace Prize of 1967. Thich Nhat Hanh would bear this honor with grace and humility.

Thich Nhat Hanh’s story is incredible, and it’s even more amazing that after facing such unimaginable political strife in his home country, he has become an internationally-respected and highly influential author, teacher and living model of compassion, peace and kindness. At age 87, he is still traveling and teaching all over the world.

Thich Nhat Hanh’s book, Living Buddha, Living Christ landed in my hands at the perfect moment (about 10 years ago, when I was on the mend from a spiritually-disorienting relationship with a conservative Christian).

It was one of those times when every word, every sentence, seemed to speak directly to my confused and broken heart. Reading that book at that exact moment saved my soul.

His writings are so simple, clear and practical. Any time I pick up a book by “Thay”—as he is known to his students—I fall in love all over again.

He has written over 100 books, and more than 40 have been published in English. Just in the past five years, some of his most intriguing titles include Savor: Mindful Eating, Mindful Life, Reconciliation: Healing the Inner Child, You Are Here: Discovering the Magic of the Present Moment and The Art of Communicating,.

If you, too, have been affected by the powerful, peaceful teachings and writings of this humble Zen monk, here’s a list of ways we, individually, can help get him nominated. Power to the people! (But act fast… the deadline for letters to get to the Nobel committee, via snail mail, is February 1.)

If you haven’t (yet) experienced Thich Nhat Hanh’s awesomeness, here are seven favorite quotes to whet your appetite.

“Our own life has to be our message.”

“Compassionate listening is to help the other side suffer less. If we realize that other people are the same people as we are, we are no longer angry at them.”

“Many people are alive but don’t touch the miracle of being alive.”

“You carry Mother Earth within you. She is not outside of you. Mother Earth is not just your environment. In that insight of inter-being, it is possible to have real communication with the Earth, which is the highest form of prayer.”

“When another person makes you suffer, it is because he suffers deeply within himself, and his suffering is spilling over. He does not need punishment; he needs help. That’s the message he is sending.”

“Breathe, smile and go slowly.”Michelle Margaret is a teacher at Life School and a diligent student in the school of Life. She has been practicing yoga for 20 years and teaching since 2002. She is a left-handed Gemini with Libra rising, cookie connoisseur, prolific writer and aspiring author who has contributed to elephant journal since 2010. Hailing from Austin, Texas, Michelle now lives and breathes in Guatemala with her life partner, one-year-old ray of sunshine and the world’s friendliest black cat, Oscar. Connect with her on Facebook or her blog.