An oasis of tranquility in the heart of New York City, this is World Tai Chi Day… 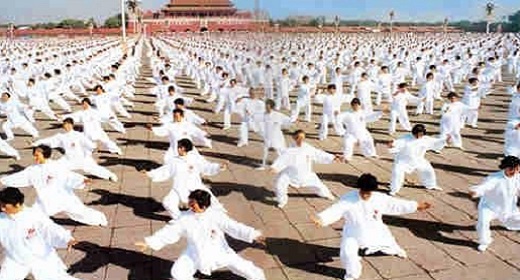 “At 10 o’clock in the morning at every spot in the world where people do tai chi, they get out and they execute their basic slow form. So it starts in Australia and it snakes around and it ends in Hawaii. And we are one of the largest events in North America here in Central Park. This is our 10th year.”

This slow-moving exercise, originally from China, has brought health and well being to millions across the world. Jesaitis has practiced tai chi for 42 years.

This energy, in Chinese, is known as qi. Tai chi is believed to open up the body’s natural energy channels and store qi in an energy field in the abdomen, known as the dan tian.

This energy greatly benefits the tai chi practitioner’s health, but also has other uses.

“Tai chi originally is a very strong martial art. Most people don’t go past the basic slow form, which is good for health and well being, but if you study it under a master who knows the forms, you can master the self-defense aspects, the aggressive aspects, plus all the weapons, the swords and sticks, and sabers.”

In addition to practicing the slow form and self-defense routines, a tai chi practitioner needs to build up their internal energy through other exercises.

“Our internal power is (developed) through cultivation, through standing exercises, or meditation, to help the body to relax and all work in one. They call this internal strength (nei jing). You develop nei jing from the dan tian.”

But it takes time. Many practitioners stand in meditation for several hours each day.

“Internal training needs much more time because that’s actually from your natural ability. They call it a supernatural power. You can see people don’t need to do much physical, and they can use a lot of power against another person.”

even a person who is physically stronger and heavier than oneself. Tai chi specializes in absorbing an opponent’s force and deflecting it back in a sudden explosive burst—known in Chinese as Fa Jing.

No matter whether this internal power is used for attacks in martial arts or simply to strengthen the body, the effects are profound.

“I had one man in his late 70’s struggle up three flights of stairs to come into the class, and within 4 or 5 months he’s bouncing up the stairs with an ice cream cone.”

The art and its energy bring joy to those who practice it. Many practice for decades attempting to reach perfection in their movements.

“It was the first thing I did in my life just because I loved to do it. So every day going out, is still a journey to try and reach a higher level, because you can never attain the ultimate but you know it’s there. So you struggle to attain a little bit more everyday. And it beats jogging.”

World Tai Chi Day is organized through the Internet and happens on the last Saturday in April every year.