7 Yoga Teachers Who Have Changed The Practice

by Starre Vartan: These instructors are inspirational, and they’ve changed the world in their own particular ways… 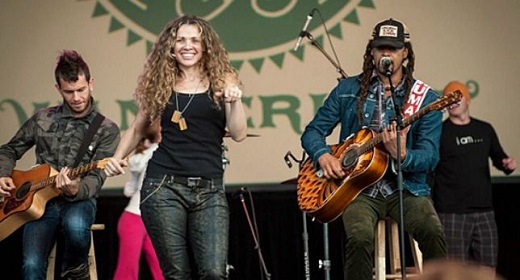 Every long-term yogi or yogini has been inspired by a teacher who they really connected with. That connection might come in the form of a physical challenge, helping the student through a personal issue, or enabling them to relax or deal with anxiety when nothing else has worked. A great teacher inspires and keeps students on the mat over the long term, reaching many different kinds of people. And the very best instructors take that influence and use it for the greater good.

The teachers below have not only taught uncountable classes, they have changed the (yoga) world in their own unique ways.

Seane Corn (above) is a co-founder of Off the Mat, Into the World, but her activism reaches back further than that group. According to her website, beginning in 1998, she “…created the yoga program at ‘Children of the Night,’ a shelter that houses and educates adolescent prostitutes in the Los Angeles area. As a result of her work with sexually exploited children, by 2004, Seane went on to became a dedicated champion for YouthAIDS, whose mission is to raise funds, provide services, and spread national awareness about the global emergency of HIV/AIDS affecting our children worldwide.” Corn is known for her vibrant, fun, uplifting yoga classes set to contemporary music; she is even known for teaching classes with live music from popular bands.

Rodney Yee and his wife Colleen both practice and teach yoga. (Photo: yeeyoga.com)

Rodney Yee is one of the foremost teachers who popularized yoga in the United States over the past decades. A former gymnast and ballet dancer, Yee studied Iyengar yoga in San Francisco when he got his start, and he calls yoga a “lifelong passion.” Yee and his wife Colleen are the health directors of Donna Karan’s Urban Zen project in New York City. He writes on his website, “We come to our mat to purify the obstacles that muddy our relationship to the changing moment. I implore us to use our practice as a tool for peace and justice. As Bob Marley sings Get up, stand up, stand up for your right.”

Coby Kozlowski is a Kripalu yoga teacher whose incredible energy is just plain catching and whose interests are omnivorous. She not only teaches yoga classes in the Kripalu style, but is a life coach and storyteller, an expert in transformative leadership, and and ecstatic dance teacher. Each of these areas of expertise informs the other when she teaches, culminating in an inspired class as well as a great workout. According to her site, Coby has a raft of intensive trainings and certificates in raw food, leadership, Ayurvedic studies, dance and psychology, and she has some other interests too: “Along with her passion for her work, she is a poet, skier, surfer, artist, triathlete, ultimate frisbee player, fire spinner and hooper, flying trapezist, ukulele novice, and lover of adventure.”

Kathryn Budig is well-known as a playful, fun vinyasa yoga teacher and organic food lover. She got her start teaching in Los Angeles for almost a decade and now her classes are available on YogaGlo. She also loves to cook and shares recipes, and writes prodigiously on several sites, including Elephant Journal, Huffington Post and Mind Body Green about all things health and yoga. She’s the co-founder of Poses for Paws, which raises money for animals via yoga. Her first book, “The Women’s Health Big Book of Yoga,” covers easy and mindful ways to incorporate yoga into regular people’s lives (in 15-minute increments, for example).

Baron Baptiste has been a teacher for over two decades and has also created his own style of yoga, called Baptiste yoga. He is often credited with introducing Power Yoga to American yogis and yoginis in the 1990s, a time when he was also part of the staff of the Philadelphia Eagles football team. He went on to establish his first two yoga studios in Boston and his teachings have since expanded to more than 40 locations. He has worked with people with multiple sclerosis and returning Iraq and Afghanistan war veterans. According to his website, “In 2007, along with Paige Elenson, Baron helped found the non-profit Africa Yoga Project, based in Nairobi, Kenya dedicated to transforming the lives of impoverished youth through service and teaching the practices and techniques of Baptiste Yoga™. Over 4,000 students attend the Africa Yoga Project courses each week, free of charge, which are delivered by 60 Kenyan teachers who live and teach within the slums of Nairobi.”

Ana Forrest has been teaching yoga for 40 years, starting when she was only 18. She has created her own style of yoga known as Forrest Yoga which focuses on breath and awareness of energy movement through the body, and has popularized using the yoga movements to heal emotional wounds. “If you want to use yoga to heal emotional pain, you must find out where it resides in your body and learn to take your breath there,” she writes on her site.

Shiva Rea has brought together yoga and music like few other teachers have, and calls herself a mystic. She’s a long-time teacher (and creator of) prana flow yoga which is described on her site as a “… transformational vinyasa flow integrating the tantric bhakti roots of yoga, Krishnamacharya’s teachings and a universal, quantum approach to the body.” Rea is also a “yogini firekeeper,” activist, and traveler who spent her first five years of life living on the beach, which she says has influenced the rhythms of her life. The video below gives a good idea of her grounded, musically based practice.