The number of homeless people in the U.S. is rising for the first time in years. What’s behind the increase? Here’s everything you need to know: 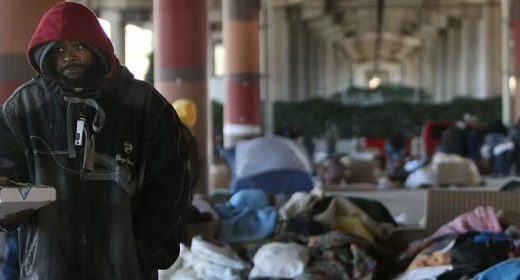 How bad is the problem?
About 554,000 people in the U.S. were homeless on any given night in 2017 — including nearly 58,000 families with children — meaning they didn’t have a safe, permanent place to sleep. That figure represents a 1 percent rise since 2016 — the first time the nation’s homeless population has increased in seven years. But the country’s biggest cities, especially those on the West Coast, have seen a far bigger rise in homelessness. New York City, which has the nation’s largest homeless population, reported a 4 percent increase since 2016 to about 76,500 people, San Diego a 5 percent increase to 9,160, and Los Angeles a 26 percent increase to nearly 55,200. Many of those homeless people crowd into places like L.A.’s “Skid Row,” where hundreds of tents and tarpaulin shanties crowd the sidewalks just blocks from City Hall. “Skid Row is — and long has been — a national disgrace,” the Los Angeles Times wrote in a recent editorial. “In the world’s richest nation, homelessness on this scale should be shameful and shocking.”

Do all homeless people live on the street?
No, in fact about two-thirds of homeless people in the U.S. live in some kind of shelter or temporary housing, staying with friends or family or in a motel. But the number of street sleepers varies from city to city. In New York, which is required by law to provide shelter for all residents, about 3,000 people sleep on the streets. In Los Angeles, three-quarters of the homeless — some 40,000 people — don’t have shelter, and sleep outside or in their vehicles. Many communities make it a crime to live outside. More than 80 cities have passed laws making it illegal to sleep in vehicles, and more than 60 have banned camping in public. Cities such as Denver and San Francisco have handed out free one-way bus tickets to the homeless, hoping to off-load the problem onto another community. “Society’s message to the homeless is abundantly clear: You don’t matter, because you don’t have money,” says Veronica Harnish, who blogs about her experiences with intermittent homelessness.

Why is homelessness rising?
While some people become homeless because of mental illness and drug addiction, more than 75 percent simply can’t afford a place to live. There are now only 12 counties in the U.S. where a worker earning the state minimum wage or federal minimum wage of $7.25 an hour would be able to afford a one-bedroom rental home on their own, according to the National Low Income Housing Coalition. And while wage growth has remained flat for the past 20 years, the median rent for a vacant home or apartment has doubled over the same period, to about $910 in 2017. A shortage of housing is pushing up rents, and so is gentrification of neighborhoods where poor people used to live. In most cities, the demand for housing far outstrips the supply. New York City, for example, added 62,345 new housing units from 2011 to 2015, enough to house about 125,000 people, but its population grew by more than 300,000 over the same period.

What’s being done to help?
With no signs of the problem disappearing, some communities are turning away from punitive approaches. Instead of razing its homeless encampments, Oakland has started providing trash pickup and portable bathrooms for residents. After a Hepatitis A outbreak began ravaging Southern California’s homeless community, private donors, charities, and city authorities worked together to erect three “bridge shelters” in San Diego. The tent-like structures are the size of a city block and filled with rows of bunk beds. They have heating and cooling, laundry facilities, and communal dining areas, plus 24/7 security and access to social services. Seattle has authorized permanent encampments for the past decade, with 11 sanctioned camps in the Puget Sound area that receive city funding. But such projects remain controversial, among both Seattleites who don’t want to live near such camps and homelessness advocates who say they’re a stopgap solution.

How can cities get people off the street?
Many experts believe the best solution is to simply put the homeless into low-cost or free apartments, without preconditions. Utah, which has a “Housing First” strategy, has one of the nation’s lowest rates of chronic homelessness. Just 6 percent of the state’s homeless are considered chronic — people who have been living on the streets for more than a year — compared with 24 percent nationwide. Evidence suggests that programs like Utah’s are far more cost-effective than putting homeless people in transitional housing. One Colorado study found that the average homeless person costs taxpayers $43,000 a year in shelters, emergency-room visits, and other expenses, while providing permanent housing for the same person would cost $17,000 a year.

Would that work elsewhere?
Finding vacant homes is a challenge in crowded, booming states like California, which would need to build 180,000 new housing units each year — 100,000 more than are currently being built — simply to keep up with population growth. “It’s obvious what the answer is: affordable housing,” said Bob Erlenbusch, who began working with the homeless in Los Angeles in 1984. “I never in a million years thought that it would drag on for three decades with no end in sight.”

Working while homeless
While many people associate the homeless with begging, about 25 percent of the homeless population has a job, according to the Washington, D.C.–based Urban Institute. In the heart of Cal­i­for­nia’s Silicon Valley, where rents are $3,000 or more, low-income workers in industries like food service, retail, and hospitality juggle their day jobs with finding a place to sleep at night. Tes Saldana, 51, works as a cook for two hotels in Palo Alto. She lives in an RV with her three adult sons, two of whom also work; their monthly vehicle payments come to $700. Until recently, she parked on a tree-lined street in nearby Mountain View along with a group of fellow homeless RV campers. Late last year, the city banned vehicles more than 6 feet high from parking there. It’s tough, she says, living in the shadow of enormous wealth. “How about for us people who are serving these tech people?” Saldana said. “We don’t get the same paycheck that they do.”