by Nick Visser: But the Minnesota senator stopped short of endorsing the Green New Deal, calling it “aspirational…” 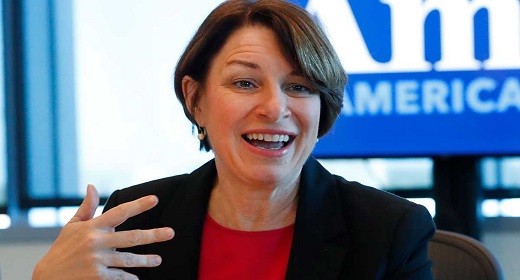 Sen. Amy Klobuchar (D-Minn.) declared Monday that if elected president in 2020 she would immediately move to reinstate federal protections for the environment and work to tackle climate change in her first 100 days.

“For too long we’ve just been admiring the problem. We’ve been saying, ‘Oh, it’s happening,’” Klobuchar said during a CNN town hall. “But what are you going to do about it? I will, on the first day as president, sign us back into the international climate change agreement. That is on day one.”

The Democratic candidate spoke about a range of topics with host Don Lemon in New Hampshire, in the third such event held by the network in recent weeks. Her pledge to reenter the Paris Agreement would be a dramatic departure from the policies of President Donald Trump, who withdrew the U.S. from the international pact in 2017, calling it “draconian.”

Klobuchar continued to lay out sweeping policy proposals, including the reintroduction of a federal Clean Power Plan, which was introduced under former President Obama but scuttled under Trump, and said she would work to increase gas mileage standards. The Trump administration has proposed gutting fuel economy rules in what’s been lambasted as a “giant giveaway” to Big Oil and automakers.

Klobuchar did express some caution about the Green New Deal, a dramatic proposal spearheaded by some Democrats to immediately address climate change and ultimately move toward carbon neutrality by the 2030s. The lawmaker said the move was “aspirational” at best, but called it an important foundation for “something that we need to move towards.”

“I think we can get close. I don’t think we are going to get rid of entire industries in the U.S.,” Klobuchar said. “I think that would be very difficult to do. We have tried so many things, and they just stuck in their tracks.”

The senator announced her bid earlier this month during a snow-covered rally in Minneapolis, hoping to tout her Midwestern roots and no-nonsense attitude to appeal to voters.

“As your president, I will look you in the eye. I will tell you what I think. I will focus on getting things done,” she said at her launch event. “That’s what I’ve done my whole life. And no matter what, I’ll lead from the heart.”

Only Harris and former Starbucks CEO Howard Schultz, a potential independent candidate who has not yet announced an official run, have had a CNN town hall so far.

Klobuchar also addressed reports first made by HuffPost that she had mistreated staff and had trouble hiring people to work on her presidential campaign.