by Jill Ettinger: Arnold Schwarzenegger doesn’t eat meat anymore. For the climate and health, he signed on as a producer of “The Game Changers” documentary to bust the vegan protein myths… 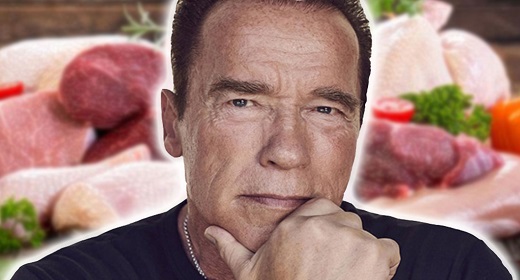 Schwarzenegger features in the highly anticipated forthcoming documentary about vegan athletes called “The Game Changers,” which he co-produced. The film, directed by Academy Award-winner Louie Psihoyos (2009’s documentary “The Cove” about the Taiji dolphin hunt in Japan), will premiere in theaters in September.

For a growing number of athletes including 5-time Formula One champion Lewis Hamilton (only the third to win 5 times in the history of the sport), top tennis stars Venus and Serena Williams who hold a combined 30 Grand Slam titles, to NFL and NBA stars including Derrick Morgan and Kyrie Irving, plants are becoming the preferred protein of choice for optimal performance. Morgan, whose wife is vegan chef Charity Morgan, helped more than a dozen of his fellow Tennessee Titans teammates adopt a vegan diet. And the gains they say are noteworthy: increased performance, quicker recovery time, better weight management, and reduced injury.

“Overcoming the preconceived notions is the biggest part. I was a part of it. I used to believe athletes had to eat meat to maintain play, then I educated myself,” Morgan told ESPN.

“When they realized that their production didn’t go down, their stats didn’t go down, they didn’t die on the field, they were like ‘sign me up’ because the food already looks and smells good,” Charity told the sports site. She’s a Le Cordon Bleu-educated professional chef for 15 years. “[2017] was a test run for a lot of the guys to realize you can be plant-based and successful.”

Olympians including lifter Kendrick Farris and cyclist Dotsie Bausch have gone vegan. Bausch sped to a silver medal in the 2012 Olympics while in her late 30s after shifting to a vegan diet. New England Patriots quarterback Tom Brady, the first to lead a team to six Super Bowl championships, adheres to a mostly vegan diet. Brady is so convinced of the benefits of eating that way that he launched a signature vegan meal track with meal kit delivery program Purple Carrot. He also sells vegan protein powders and snacks under the TB12 label.

Like most weightlifters at the time — Schwarzenegger competed in the 1970s — he fueled his rise to bodybuilding stardom with a diet heavy in animal products. The former Mr. Universe and Mr. Olympia became the epitome of ultimate fitness, chiseled and bulging his way into global stardom, which eventually led him to become one of the world’s top-paid film action heroes, starring in hits like “The Terminator” series as well as “Predator”, “Total Recall”, and “True Lies.”

A long way from his Mr. Universe days, Schwarzenegger has made a few major pivots since he began competing as a bodybuilder – first, he moved into film, becoming an overnight sensation after the “Conan the Barbarian” series launched in 1982; and then he moved from acting into politics, serving as governor of California from 2003-2011. And, most recently, the former bodybuilder has not only stopped eating meat, but he’s begun using his platform to encourage others to do the same for their health and the health of the planet.

In “Game Changers” the film executive produced by Academy Award-winning director James Cameron (“Avatar”, “Titanic”), Schwarzenegger is a surprising voice of reason, explaining his firsthand experience with meat industry propaganda targeting both bodybuilders and men under the myth that meat is necessary for building “manly” muscles.

“They showed us a lot of commercials, selling us the idea that real men eat meat. But you’ve got to understand: that’s marketing. That’s not based on reality,” he says in the film’s trailer.

“The Game Changers” isn’t the first time Schwarzenegger teamed up with Cameron. The two appeared in a WildAid promotion in 2016, encouraging people to reduce their meat intake for the sake of the climate.

“You have to start slowly, you can’t just convince people to stop eating meat altogether,”Schwarzenegger said. “It’s a very big challenge, it doesn’t mean it shouldn’t be done and you shouldn’t be on that campaign, but it’s a very hard thing to overcome.”

Meat And The Climate Crises

As California’s governor, Schwarzenegger became heavily involved in the global climate crisis. The fifth-largest economy in the world, California’s many industries have felt the effects of climate change – from years-long droughts to rising sea levels, decreased snowpack, increased wildfires, and deforestation.

According to Schwarzenegger, 28 percent of global greenhouse gases are a direct result of livestock farming. Seventy-billion land animals are killed every year food –ten times the global population. But some estimates put the livestock industries at more than half of all global emissions. It’s a difficult number to tally; livestock farming relies on a number of other emissions-producing industries from pesticide- and herbicide-sprayed crops like alfalfa, corn, and soy, to transportation, electricity, and packaging like plastic and foam.

“It drives me crazy when people talk about 30 years from now, rising sea levels and so on. What about right now? Thousands of people are dying from pollution. People are living with cancer [because of air pollution],” Schwarzenegger told The Guardian in 2015.

“There are people stuck in cancer wards now, tubes sticking out of them – 7 million people die a year because of pollution,” he said. “We should be talking about that.”

“Stuff that happens in the future does not mean anything to people.”

Producing a kilogram of meat protein takes an estimated three tot ten kilograms of vegetable protein, the BBC reports. Recent studies suggest that by converting livestock farming to growing plant-based protein instead, many of the world’s hunger and food access issues could be alleviated. A study earlier this year found that converting UK farmland into forests could offset the country’s CO2 emissions by 12 years.

Animal products — meat, eggs, milk — aren’t just an issue when it comes to the climate crisis, either. That same forest study found converting land away from livestock could produce enough protein and calories for every person living in the UK.

Animal products are also some of the leading contributors to disease and chronic human health issues from diabetes and obesity to heart disease, high cholesterol, and some forms of cancer. An estimated $38 billion in health care costs could be reduced annually in a switch away from animal-based foods, a study published in the journal PLOS One found last year. The study looked at the impact taxing red and processed meat could have in both boosting the health of the global population as well as in reducing costs associated with medical treatments.

“You can get your protein many different ways,” Schwarzenegger told BBC News in 2015.

While “The Game Changers” focuses on the health and performance benefits of eliminating meat, it’s easy to see the overlap with the environment.

Schwarzenegger says the problems are widespread and interconnected. The Guardian reported on a commercial that aired in California while he was governor. The ad showed children reliant on inhalers as a result of the state’s pollution. And while cities like Los Angeles have significantly improved air quality in recent decades, problems persist as a result of industrial pollution and increased greenhouse gas emissions in the state.

The former governor recently said he was “starstruck” after meeting young climate activist Greta Thunberg. The 16-year-old Swedish student rose to international fame after she started skipping school every Friday to protest climate inaction. She has taken a firm stance against the livestock industry as well. She took her own parents to task for eating meat.

“You say you love your children above all else and yet you’re stealing their future in front of their very eyes,” Thunberg said in a UN climate speech.

The Future Is Vegan?

A recent report found that if 100 percent of the planet switched to a vegan diet, that would lead to a 70 percent decrease in total global emissions. It would also see one billion hectares of land currently used for livestock production made available for growing plant-based proteins, fruits, and vegetables.

A realist, Schwarzenegger doesn’t expect the world to stop eating meat; less than five percent of the total population is vegan. But flexitarianism is on the rise. These “meat reducers” are diversifying their protein choices much like they’ve started including dairy-free milk, cheese, yogurt, and ice cream into their diets.

In 2015, Schwarzenegger spoke at the United Nations Paris Climate Change Conference, encouraging people to go meat-free a few days a week for the benefit of the planet.

“People will buy in to stop eating meat one or two days a week – you have to start slowly. It’s a very big challenge but it doesn’t mean it shouldn’t be done,” he told the BBC.

“To use one of the four-letter words all of you commenters love, I don’t give a damn if you believe in climate change,” Schwarzenegger said. “I couldn’t care less if you’re concerned about temperatures rising or melting glaciers. It doesn’t matter to me which of us is right about the science.”