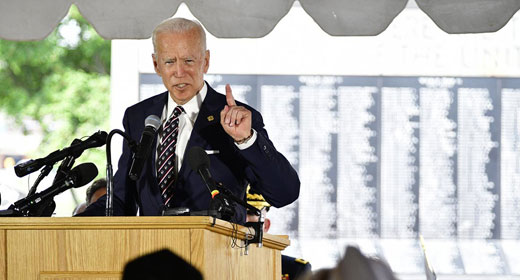 over a decade to bring U.S. greenhouse gas emissions to net zero by 2050.

The Democratic front-runner’s plan is an effort to counter criticism from the party’s left flank that he does not support aggressive action to fight climate change, which has emerged as a major theme early in the presidential race. Biden’s plan mirrors many of his rivals’ in calling for transitioning to clean energy sources and eliminating the emissions that are driving up temperatures, boosting sea levels and worsening weather disasters.

Biden also said his campaign would refuse donations from fossil fuel executives and corporations, a marker that greens have used as a measure of how serious candidates are in combating the industry’s efforts to slow climate policy. His plan described the Green New Deal as “a crucial framework for meeting the climate challenges we face.”

And he said he would funnel federal revenues from eliminating the Trump tax cuts passed in late 2017 and ending tax breaks for the fossil fuel industry to finance a federal clean energy spending program. Biden would demand Congress pass climate change legislation his first year in office to create an enforcement mechanism for reducing emissions, make a “historic investment” in climate research and encourage “rapid deployment of clean energy” to achieve net-zero emissions by mid-century. He also promised to stop issuing permits for new oil and gas drilling on federal lands and waters.

“More severe storms and droughts, rising sea levels, warming temperatures, shrinking snow cover and ice sheets — it’s already happening. And science tells us that how we act or fail to act in the next 12 years will determine the very livability of our planet,” Biden said in a video released Tuesday. “So today I’m announcing my plan for a Clean Energy Revolution. It outlines what we have to do to meet this challenge head-on and how we’re going to get there.”

Advisers to Biden said last month that his climate agenda would seek a “middle ground,” which quickly drew rebukes from progressives who said anything but aggressive action would leave the U.S. short of what climate scientists say is necessary to avert the worst effects of climate change. The U.N.’s Intergovernmental Panel on Climate Change said last fall that nations have until 2030 to get on a path to net-zero carbon emissions by mid-century if they are to prevent global temperatures from rising 1.5 degrees Celsius above preindustrial levels.

Biden’s plan seeks to quiet some of his critics by incorporating the broad tenets of the Green New Deal championed by Rep. Alexandria Ocasio-Cortez (D-N.Y.) and progressive activists who have elevated climate change in the national conversation.

Biden also said he would recommit the U.S. to the Paris climate agreement, which President Donald Trump has promised to withdraw from, and push countries to set even more ambitious domestic emissions targets. Many countries are still falling behind their Paris pledges, which climate scientists said are needed to be made more aggressive to deal with climate change. He said he would demand a worldwide ban on fossil fuel subsidies and take a hard tack on China to reduce its coal dependency and stop financing fossil fuel projects overseas.

Biden said using the federal government will be key to making greater strides. He called for establishing a cross-agency climate research program called ARPA-C, modeled after the Advanced Research Projects Agency-Energy at the Energy Department. It would focus on lowering the cost for grid-scale power storage, achieving zero-net energy buildings, reducing the cost of next-generation nuclear power generators and decarbonizing industrial heat needed to make steel, concrete and chemicals, among other things.

Infrastructure would also be a focus, and Biden’s plan called for encouraging work on regional climate resiliency plans and ensuring the electric grid, roads and bridges are designed to withstand the effects of climate change. He also set a target of reducing emissions from the nation’s buildings 50 percent by 2035, adding 500,000 electric vehicle charging outlets by 2030 and expanding and improving train and freight travel.

The campaign also said it would require public companies to share the risks climate change poses to supply chains and operations; enforce tougher appliance standards; move toward decarbonizing the transportation sector, which is responsible for the largest amount of U.S. emissions; develop new fuels to reduce emissions from aviation; and set “aggressive” limits on methane, a potent greenhouse gas, for new and existing oil and gas operations.