Children Should Be Outside for 4-6 Hours Every Day 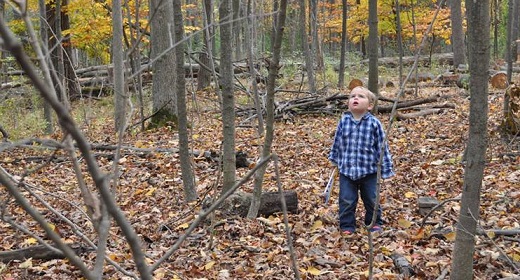 We aim for 4-6 hours outside at least three to four times a week (a little more in the nicer months and a little less in the worse ones).  I first came across this time recommendation in the works of Charlotte Mason, a classical English educator who lived at the turn of the 20th century.

I originally thought her idea was utterly preposterous.  It is a far cry from typical child activities these days, most of which last no longer than an hour.  At the invite of a friend we began to spend large immersive chunks of time in nature and immediately my eyes were opened.  Children who are allowed this freedom of time outside get lost in nature.  They get lost in their imaginations and they get lost in wonder.  And then they rapidly develop.  There are many factors why but one reason is due to the rich sensory environment that nature always provides.

Our 1000 Hours Outside Goal is loosely based on the writings of Charlotte Mason but we have adapted to make room for daily life.   Interestingly, her findings about what is healthy for development of the whole child are consistently being backed by research over 100 years later.

In Balanced and Barefoot: How Unrestricted Outdoor Play Makes for Strong, Confident and Capable Children, Angela J. Hanscom writes “kids of all ages should get at least three hours of free play outdoors a day.”  I’m all for balance.  Understandably, family life is a tricky juggle.  But no matter the situation we are in we owe it to our children to try our best to give them baseline the components they need for higher-level development.  Maybe 4-6 hours a day outside isn’t doable but the current statistics say that the average child only gets 4-7 minutes of outdoor free play every day.  This means that the average child is probably outside for 30 minutes or so a few times a week.

Some have determined that 1000 Hours Outside is too lofty of a goal and they have adjusted a bit.  That said we do need to be aware that there are specific recommendations regarding how much outdoor free play children should get for optimal development.   If three hours a day is a baseline we risk shortchanging our children if our goal is only three hours a week.  That is why we have a goal, so that we don’t miss this key component that all children need.  When kids are given time to be outside their bodies instinctively seek out the sensory input they need to grow and develop.

If children can consume media through screens 1200 hours a year on average than the time is there and at least some of it can and should be shifted towards a more productive and healthy outcome. ​