by Rosamond Hutt: China has unveiled a prototype of a new magnetic levitation (maglev) train designed to reach speeds of up to 600 km/h… 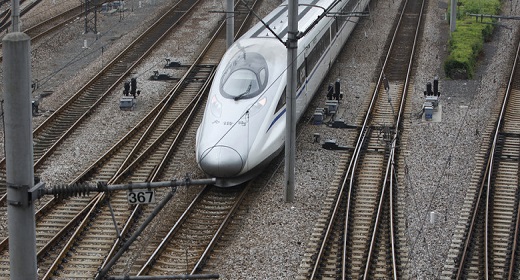 Maglev technology uses strong electromagnets which lift and propel the train forward on a cushion of air. Without the problem of friction between wheels and rails, maglev trains are able to hit greater speeds than conventional locomotives, and with less noise and vibration.

China already has the world’s fastest commercial maglev service. The Shanghai Maglev, with a top operational speed of 431 km/h, has been carrying passengers on a 30 km stretch between Shanghai’s Pudong airport and the city centre since 2003. 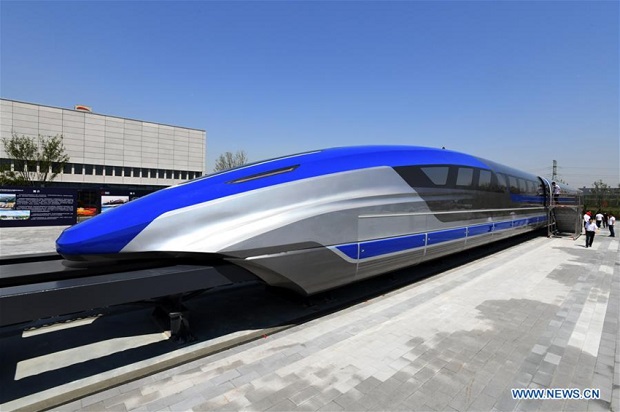 In 2017, Fuxing bullet trains went into service on the 1300 km Beijing-Shanghai line, significantly reducing journey times. These trains travel at around 350 km/h, but the prototype maglev will be so fast it could provide a competitive alternative to air travel, according to its developer.

Ding Sansan, deputy chief engineer at the train’s developer CRRC Qingdao Sifang, a subsidiary of the state-owned China South Locomotive and Rolling Stock Corporation (CRRC), told the media that a trip from Beijing to Shanghai that takes about four and a half hours by plane, including preparation time for the journey, and about five and a half hours by high-speed rail, might last only three and a half hours on the maglev.

However, before it takes any passengers, the new train, built in the eastern Chinese city of Qingdao, is scheduled to undergo a period of extensive testing.

China isn’t the only country experimenting with maglev technology. Japan, a pioneer of high-speed rail, broke its own world record, hitting 603 km/h during a test run of an SC Maglev train in 2015.

The country is building a new maglev line between Tokyo and Nagoya, scheduled to open in 2027.

he service will run at a top speed of 500 km/h, covering the 286 km distance in 40 minutes instead of the current journey time of 1 hour 32 minutes. There are also plans for maglev trains to halve the journey time from Tokyo to Osaka by 2045.

Though Japan, South Korea and western European countries including France, Italy, Spain and Germany have extensive high-speed rail networks, China has more than 29,000 km of lines – around two-thirds of the world’s total.