by Brian Donegan: A deadly heat wave has sent temperatures above 120 degrees in northern India… 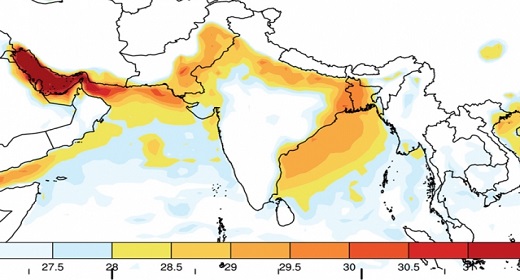 triggering heat stroke and warnings of water shortages, as the country experiences its second-driest pre-monsoon spell in 65 years.

The Rajasthan desert city of Churu recorded a high of 123.4 degrees Fahrenheit (50.8 degrees Celsius) Saturday, according to the Indian Meteorological Department (IMD), as reported by the Times of India. It was the highest temperature on record for Rajasthan state, where many locations topped 115 degrees over the weekend.

Three years ago, on May 19, 2016, Phalodi in Rajasthan was the site of India’s record-hottest temperature of 123.8 degrees Fahrenheit (51 degrees Celsius).

Extreme heat could persist through much of this week across Rajasthan, Maharashtra, Madhya Pradesh, Punjab, Haryana and Uttar Pradesh states, the IMD said.

The IMD says all age groups have a very high likelihood of developing heat illness and heat stroke and suggests extreme care is needed for vulnerable people.

Rivers and lakes in the region have begun to dry up, raising concerns of water shortages in several major cities, including Chennai, according to Phys.org. Some people stopped washing their clothes in order to conserve water during this shortage.

It’s not just the heat at fault. The annual South Asia monsoon, which typically restores India’s water supplies by bringing much-needed rain to the country each summer, is off to a near-record slow start.

India is experiencing its second-driest pre-monsoon spell since 1954, the Times of India reported. The three-month period from March through May makes up the pre-monsoon season.

“Pre-monsoon rains tend to allay some of the severe water shortage problem in a region,” Pulak Guhathakurta, head of Climate Application and User Interface at the IMD’s Office of Climate Research Services, told the Times. “Even deficient pre-monsoon rainfall can go a long way in maintaining the soil moisture necessary for agriculture.”

Research has found that pre-monsoon rainfall has been on the decline over the past centuryin western India, Guhathakurta added. However, he noted this trend had not been observed across the entire country until recently, likely due to a shifting rainfall pattern.