Dynamic Growth For Desalination And Water Reuse In 2019 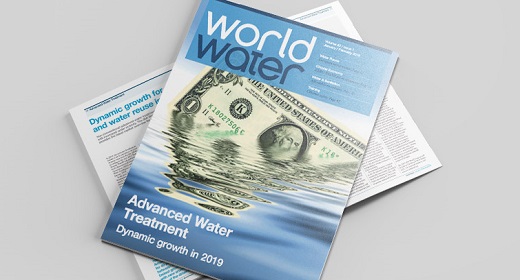 In 2019, the seawater desalination market is set to experience its most dynamic year since the late 2000s, according to the new IDA Water Security Handbook, published by the International Desalination Association (IDA) and Global Water Intelligence (GWI) inJanuary 2019.

In the past 3 years, the overall desalination market has remained steady; however, several factors are driving the surge in desalination projects. These include rising demand for clean water, decreasing capital and operational costs of desalination, and the need to replace older facilities with energy-efficient processes, among others. At the same time, water reuse has become an increasingly important part of water resources management around the world. The global contracted reuse capacity has almost doubled since 2010, with cumulative contracted capacity increasing from 59.7 million m3/d in 2009to 118 million m3/d in 2017.

IDA Secretary General Shannon McCarthy relates this industry growth to global trends. “As climate change continues to impact our world, along with industrial and population growth, the demand for clean water increases. Desalination and water reuse: non-conventional, environmentally sound water supply solutions are in keeping with the circular water economy and offer solutions to water scarcity. The trends we are seeing point to a broad recognition that these advanced water treatment solutions are essential to the health and well-being of people and economies around the world, both now and in the future.”

“The big breakthrough in the past year has been on the cost of desalination,” says GWI Publisher Christopher Gasson. “Recent project tenders in Saudi Arabia and Abu Dhabi have seen the price fall below $0.50/m3 for the first time. After a decade in which price drifted upwards as a result of high materials costs and higher energy costs, this is very good news. Indeed, we expect 2019 to be the best year ever in the desalination market. In terms of water reuse, prices for indirect potable standard water are in the $0.30-$0.40 range, but the market is still held back by public perceptions.”

Significant price reductions in desalinated water pro-duction costs are related to several factors not only specifically linked to technological progress, says Carlos Cosín, IDA officer and CEO of Almar Water Solutions. “From my perspective, the contractors’ experience after years of building large-scale projects in the region has led to a cost-efficient optimization of the construction process. New contractual and financial models have contributed to the creation of strong, solid consortiums, which have the knowledge to accommodate risk in a more efficient manner. Together with lower interest rates in the financial sector, these are all important factors that are helping to push tariffs down.”

Material and design changes have also contributed to price reductions, Cosín explains. Lower petroleum prices have reduced the cost of desalination plant components, many of which are manufactured from oil-derived materials, such as membranes and plastic pipes. Additionally, energy savings has been realized through advances in membranes that require less inlet pressure, energy-efficient recovery devices, and larger reverse osmosis trains with larger pumps and motors capable of higher efficiencies.

The expected surge in desalination is largely a result of gathering momentum in construction plans in the Middle East, especially for the six Gulf Cooperation Council (GCC) nations: Bahrain, Kuwait, Oman, Qatar, Saudi Arabia, and the United Arab Emirates. According to the 2018-2019 IDA Water Security Handbook, 1.9 million m3/d of seawater capacity was contracted in the first half of 2018, up 26 percent over the same period in 2017. Since that time, preferred bidders have emerged on projects totaling well over 1 million m3/d in additional new capacity in the region.

No single factor is catalyzing the boom of desalination projects in GCC countries, says IDA President Miguel Angel Sanz, who is also the director of strategic development for treatment infrastructure at Suez International. Instead, he explains that several elements are driving the momentum in a region with limited natural water resources that are decreasing each year. These include high population growth, the need to update old desalination facilities, and the crude oil crisis.

Sanz also notes that the boom of renewable energies producing electricity at a cost as low as US$20 per megawatt hour (MWh) has finally put into the market a trend to reduce drastically the production cost of desalinated water, where the energy is half of the tariff. In the case of the UAE, another special catalyzer is the next commissioning of nuclear power reactors that will force the end of coupling conventional power plants to thermal desalination.

“All these factors have shifted the balance toward building new mega plants in the area, producing water more efficiently and drastically reducing the cost by economy of scale, ‘aligning the planets’ in a very short period and causing this desalination boom,” Sanz adds.

Not all of the contracted large seawater plants are located in the Middle East. The largest seawater desalination award listed in the 31st desalination inventory is the 378,000-m3/d seawater reverse osmosis (SWRO) project in Rosarito, Mexico. This was followed by projects at Hamriyah (Sharjah, UAE, 272,760 m3/d), Shoaiba 3 expansion 2 IWP (Saudi Arabia, 250,000 m3/d) and Al Khobar (Saudi Arabia, 210,000 m3/d).

Globally, contracted capacity for brackish water desalination declined by 19 percent over the prior year, but in the United States (US), contracted brackish water desalination rose significantly, totaling 205,600 m3/d, the highest level since 2012 and a 26-percent increase over 2016, with a fairly even split between municipal and industrial plants.

Desalination of lower-concen-tration feedwater, such as waste-water and low-concentration surface water, also increased, comprising almost 25 percent of total capacity in 2017 compared to approximately 15 percent in 2016. The majority of this capacity is made up of large wastewater treatment plants in China and India.

From a geographic perspective, contracted capacity in the Middle East – the largest market for desalination – fell from 2016 to 2017, but this decline was offset in 2018 by the awarding of several large projects in Saudi Arabia and Bahrain as well as expansion projects in both Dubai and Sharjah. Dubai Electricity and Water Authority (DEWA) awarded contracts for a 181,840-m3/d SWRO expansion at its Jebel Ali power and desalination complex as well as a 272,360-m3/d SWRO expansion of Federal Electricity and Water Authority’s (FEWA) Hamriyah desalination plant in Sharjah.

The Asia-Pacific desalination market grew in 2017, primarily due to the Chinese desalination market where contracted capacity reached its highest level since 2010. In the Americas, 2018 was the most active year for desalination since 2013. In sub-Saharan Africa, Kenya’s Mombasa County awarded two projects of 100,000 m3/d and 30,000 m3/d while three smaller projects were awarded in Cape Town to help avert its looming “Day Zero” water crisis.

The industrial desalination market grew by 21 percent in contracted capacity between 2016-2017, according to the IDA Water Security Handbook. Increased activity in upstream and downstream oil and gas accounted for more than one third of contracted industrial capacity in 2017 while rising commodity prices have revived desalination activity in the mining industry, with 201,000 m3/d of new capacity contracted in the first half of 2018 alone. Rapid growth in the microelectronics industry is also creating opportunities for desalination technologies, with contracted capacity in this sector more than doubling from 2016-2017.

IDA Director and Managing Director of Aquatech Devesh Sharma sums up the principal reasons for the recent 21-percent rise in the industrial desalination market: “The intersection of water scarcity and corporate water risk is driving growth in the use of desalination and other forms of advanced water technology in industry. Concerns about operational risks, corporate social responsibility, sustainability, and water’s direct impact on P&L [profit and loss] have made this a boardroom issue for a majority of large companies.”

The most significant driver of expenditure on advanced water technology is water scarcity, he explains. “Most industrial develop-ment occurs either in highly water scarce regions or densely populated regions where there is an emerging and extreme competition for fresh water resources. Water scarcity has driven more stringent environ-mental regulation demanding lower volumes of discharge as well as higher purity of wastewater, thus driving the need for water reuse, particularly in industry.

“All of this, coupled with industry’s demand for higher purity, is creating an interesting and emerging market need for better advanced water technology. Water is a widely used raw material in industry, and the way in which it is treated can have a significant impact on process efficiency. In certain cases, it takes more water to mine the same element than it did in the past, and end-users are also finding opportunities where higher purity of water in the process results in better production yields. This is also being seen in the oil and gas industry with the advent of smart water processes that adjust the water quality to the geology in the well to minimize issues such as biological fouling or precipitation, all with the objective to maximize yield.

“Removing dissolved salts from water and other technologies, which turns low-quality wastewater and raw water sources into high-quality process water, will be an important driver of industrial efficiency moving forward.”

The importance of water reuse as a solution to the world’s growing water issues has escalated significantly in the past few years. Increasingly, many regions are looking to wastewater reuse over large-scale desalination as a solution to drought-induced water scarcity. For example, both Cape Town and California are pursuing potable water reuse of wastewater, and reuse of wastewater in industry plays a vital part of policy responses to degradation of water resources in China and India.

As contracted capacity continues to rise, the epicenter of the global wastewater reuse market has shifted from North America to Asia, with China accounting for 49 percent of capacity contracted between 2010 and 2017. However, new capacity in India and Taiwan is also significant. India is now the fastest growing market in the region, with new environmental legislation as one of the drivers.

Water reuse is gaining traction in the Middle East as well although desalination remains the primary unconventional water source for arid countries in the region. Large-scale upgrades of sewage treatment plants in the Gulf and Egypt have driven strong growth in reuse.

Spain has led the European wastewater reuse market since 2010, with large projects aimed at agricultural users in that country. However, a proposed EU directive that would require treatment of microbiological pathogens to facilitate water reuse for agricultural irrigation has the potential to increase water reuse in the EU from 3 million m3/d to 18 million m3/d.

Industrial water demand is a key driver of the wastewater reuse market. This trend is especially apparent in water-intensive manufacturing and extraction industries as well as in regions where population growth has created a conflict between industrial and municipal water users, driving the industry to seek alternative water sources, as municipal users are typically prioritized, especiallyin times of drought.