Think of the name Buckminster Fuller, and you may think of a few oddities of mid-twentieth-century design for living: the Dymaxion House, the Dymaxion Car, the geodesic dome… 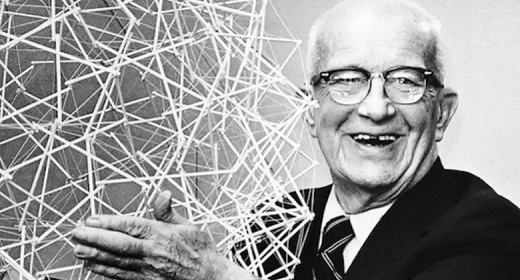 But these artifacts represent only a small fragment of Fuller’s life and work as a self-styled “comprehensive anticipatory design scientist.” In his decades-long project of developing and furthering his worldview — an elaborate humanitarian framework involving resource conservation, applied geometry, and neologisms like “tensegrity,” “ephemeralization,” and “omni-interaccommodative” — the man wrote over 30 books, registered 28 United States patents, and kept a diary documenting his every fifteen minutes. These achievements and others have made Fuller the subject of at least four documentaries and numerous books, articles, and papers, but now you can hear all about his thoughts, acts, experiences, and times straight from the source in the 42-hour lecture series Everything I Know, available to download at the Internet Archive. Though you’d perhaps expect it of someone whose journals stretch to 270 feet of solid paper, he could really talk.

In January 1975, Fuller sat down to deliver the twelve lectures that make up Everything I Know, all captured on video and enhanced with the most exciting bluescreen technology of the day. Props and background graphics illustrate the many concepts he visits and revisits, which include, according to the Buckminster Fuller Institute, “all of Fuller’s major inventions and discoveries,” “his own personal history in the context of the history of science and industrialization,” and no narrower a range of subjects than “architecture, design, philosophy, education, mathematics, geometry, cartography, economics, history, structure, industry, housing and engineering.” In his time as a passenger on what he called Spaceship Earth, Fuller realized that human progress need not separate the “natural” from the “unnatural”: “When people say something is natural,” he explains in the first lecture (embedded above as a YouTube video above), “‘natural’ is the way they found it when they checked into the picture.” In these 42 hours, you’ll learn all about how he arrived at this observation — and all the interesting work that resulted from it.

(The Buckminster Fuller archive has also made transcripts of Everything I Know — “minimally edited and maximally Fuller” — freely available.)