Everything You Want To Know About Lyme Disease

by Clint Williams: You may want to be a bit more wary when walking in the woods this summer… 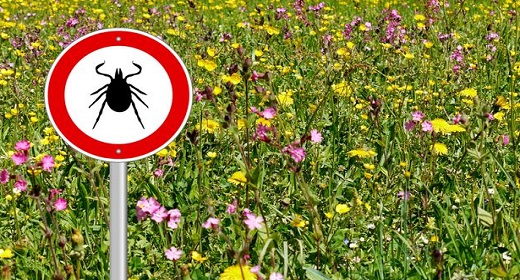 The rate of Lyme disease cases have been climbing in the last two decades, but you can’t allow the terror of ticks to keep you from the great outdoors — just be informed.

Lyme disease — so named because it was first reported in the United States in the town of Old Lyme, Connecticut, in 1975 — is caused by the bacterium Borrelia burgdorferi. It is spread through the bite of infected blacklegged ticks (also known as deer ticks) in New England, Mid-Atlantic and Great Lakes regions. It can also be spread by the western blacklegged tick in the Pacific Northwest.

While the number of Lyme disease cases is growing, it remains a largely regional concern. The number of cases of Lyme disease reported has increased steadily over the past 25 years, according to the Centers for Disease Control and Prevention (CDC). There are roughly 30,000 cases reported each year, but that doesn’t tell the whole story.

“Typically, Lyme disease is not acquired in the southeastern United States and central Texas,” says Dr. Paul Auwaerter, an associate professor of medicine at the Johns Hopkins University School of Medicine who also serves as the clinical director for the Division of Infectious Diseases.

However even though the disease is primarily found up North, a survey conducted by Quest Diagnostics in 2018 revealed that Lyme disease cases have been reported in all 50 states.

“Lyme disease is a bigger risk to more people in the United States than ever before,” said Dr. Harvey W. Kaufman, senior medical director for Quest Diagnostics and head of the company’s Health Trends research program. “Our data show that positive results for Lyme are both increasing in number and occurring in geographic areas not historically associated with the disease. We hypothesize that these significant rates of increase may reinforce other research suggesting changing climate conditions that allow ticks to live longer and in more regions may factor into disease risk.”

While they may transmit other diseases, ticks common in other parts of the country — such as the Lone Star tick (Amblyomma americanum), the American dog tick (Dermacentor variabilis), the Rocky Mountain wood tick (Dermacentor andersoni) and the brown dog tick (Rhipicephalus sanguineus) — are not known to transmit Lyme disease, according to the CDC.

But even finding the right tick — or wrong tick, depending on your point of view — latched onto your skin doesn’t mean you’re going to get Lyme disease. In most cases, the tick must be attached for more than 36 hours before the bacteria can be transmitted.

“If you get the tick off within 24 to 36 hours, you’re not going to get Lyme disease,” says Dr. Michael Zimring, co-author of “Healthy Travel” and director of the Center for Wilderness and Travel Medicine at Mercy Medical Center in Baltimore.

The role of the mouse

White-footed mice infect up to 95 percent of ticks that feed on them. (Photo: Szasz-Fabian Jozsef/Shutterstock)

New York ecologists Rick Ostfeld and Felicia Keesing have been studying Lyme disease for more than two decades. They are able to predict how many cases there will be each year by counting the mice the year before.

That’s because mice are very efficient transmitters of the disease and infect the majority of ticks carrying Lyme in the Northeast. They infect as many as 95 percent of ticks that feed on them.

“An individual mouse might have 50, 60, even 100 ticks covering its ears and face,” Ostfeld tells NPR.

Areas where the winter has been mild and mice population is high will likely experience a risky summer for Lyme disease.

But regional predictions aren’t as important as realizing that if you’re in one of those 14 states where Lyme disease is endemic, you should take precautions.

“There’s always a huge risk,” Dr. John Aucott, director of the Johns Hopkins Rheumatology Lyme Disease Research Center, told the Huffington Post. “It’s not like a risk of a tornado, where the tornado is either there or not.”

Lyme disease symptoms and when to worry

How can you tell how long the tick has been there? Is it full of blood?

“If the tick is flat — chances are you didn’t get Lyme disease,” says Auwaerter.

The telltale symptom of Lyme disease is a red, circular “bulls-eye” rash that appears five to 14 days after infection. The CDC says about 70 to 80 percent of people infected develop the rash, but Dr. Steven Soloway, a board-certified rheumatologist in Vineland, New Jersey, says the numbers may be higher and many people simply don’t notice the rash. Other symptoms in this first stage of Lyme disease include fatigue, chills, fever, headache, muscle and joint aches and swollen lymph nodes.

Other symptoms include Bell’s palsy and heart palpitations and dizziness due to changes in heartbeat.

If you’ve been bitten by a deer tick like this one, the telltale symptom of Lyme disease is a red, circular bulls-eye rash that appears five to 14 days after infection. (Photo: Steven Ellingson/Shutterstock)

“There is a current habit being promoted by many doctors, hospitals, emergency rooms, where if somebody has a tick bite, they are given a single dose (in the form of two pills) of doxycycline to prevent Lyme disease,” Lyme Action Network president Christina Fisk told the Press Republican.

However, she says there’s a lack of evidence showing that this treatment is effective, even though the CDC recommends it. “It’s based on a very small study done only over a six-week period, and all it proved was that the two pills prevent a rash from occurring. It does not kill the bacteria. It does not prevent the disease. It only prevents a rash and, therefore, complicates diagnosis later on down the line.”

Fisk’s organization says that the International Lyme and Associated Disease Society’s advice is to refuse the dose of doxycycline. The medical society “has found that many, many people who get that treatment go on to have chronic Lyme,” says Fisk.

Lyme disease is treated with antibiotics for two to four weeks. The vast majority of patients recover quickly, experts say. A small percentage of people treated for Lyme disease will continue to have some symptoms. Although sometimes called chronic Lyme disease, this condition is officially called post-treatment Lyme disease syndrome. The cause of PTLDS isn’t known. But treatment, experts say, should target the specific symptoms, such as joint swelling. Long-term use of IV antibiotics is not appropriate, experts say.

You can take steps to prevent Lyme disease by taking steps to avoid a tick bite. Avoid bushy and grassy areas when walking in the woods, especially in the areas with deer ticks. Wear long pants and long-sleeved shirts and wear insect repellent containing DEET on exposed skin. After walking in wooded areas, thoroughly check the skin for the poppy seed-sized ticks.