by David Talbot: The world’s largest and cheapest reverse-osmosis desalination plant is up and running in Israel… 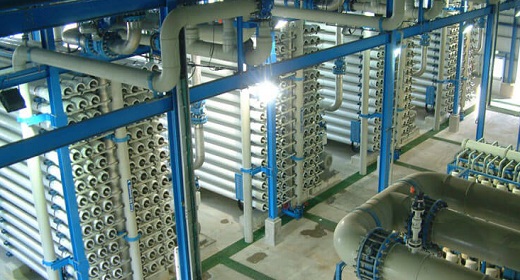 Worldwide, some 700 million people don’t have access to enough clean water. In 10 years the number is expected to explode to 1.8 billion. In many places, squeezing fresh water from the ocean might be the only viable way to increase the supply.

The new plant in Israel, called Sorek, was finished in late 2013 but is just now ramping up to its full capacity; it will produce 627,000 cubic meters of water daily, providing evidence that such large desalination facilities are practical. Indeed, desalinated seawater is now a mainstay of the Israeli water supply. Whereas in 2004 the country relied entirely on groundwater and rain, it now has four seawater desalination plants running; Sorek is the largest. Those plants account for 40 percent of Israel’s water supply. By 2016, when additional plants will be running, some 50 percent of the country’s water is expected to come from desalination. 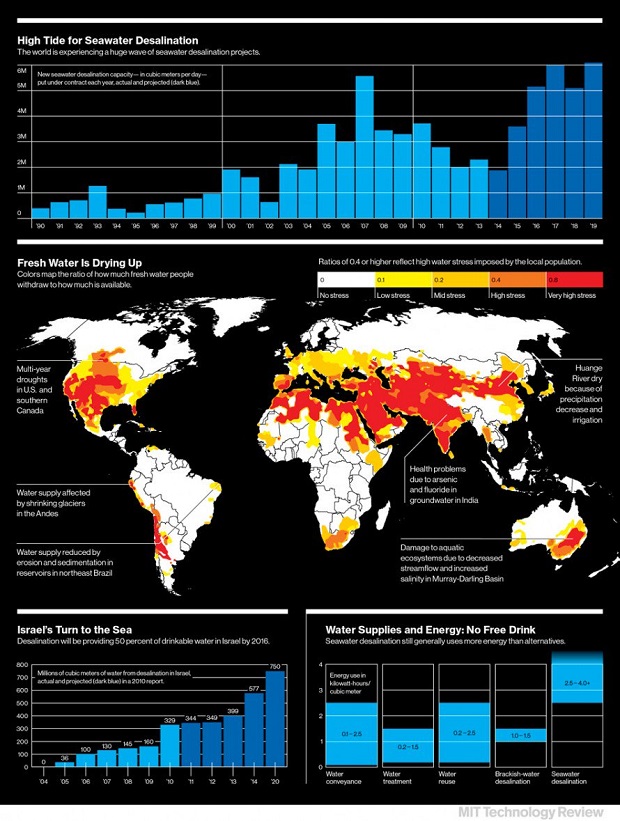 The traditional criticism of reverse-osmosis technology is that it costs too much. The process uses a great deal of energy to force salt water against polymer membranes that have pores small enough to let fresh water through while holding salt ions back. However, Sorek will profitably sell water to the Israeli water authority for 58 U.S. cents per cubic meter (1,000 liters, or about what one person in Israel uses per week), which is a lower price than today’s conventional desalination plants can manage. What’s more, its energy consumption is among the lowest in the world for large-scale desalination plants.

The Sorek plant incorporates a number of engineering improvements that make it more efficient than previous RO facilities. It is the first large desalination plant to use pressure tubes that are 16 inches in diameter rather than eight inches. The payoff is that it needs only a fourth as much piping and other hardware, slashing costs. The plant also has highly efficient pumps and energy recovery devices. “This is indeed the cheapest water from seawater desalination produced in the world,” says Raphael Semiat, a chemical engineer and desalination expert at the Israel Institute of Technology, or Technion, in Haifa. “We don’t have to fight over water, like we did in the past.” Australia, Singapore, and several countries in the Persian Gulf are already heavy users of seawater desalination, and California is also starting to embrace the technology (see “Desalination Out of Desperation”). Smaller-scale RO technologies that are energy-efficient and relatively cheap could also be deployed widely in regions with particularly acute water problems—even far from the sea, where brackish underground water could be tapped.

Earlier in development are advanced membranes made of atom-thick sheets of carbon, which hold the promise of further cutting the energy needs of desalination plants.