by Marianne Williamson:  My appearance on this week’s Super Soul Sunday is to celebrate the 20-year anniversary of the publication of my book A Return to Love. 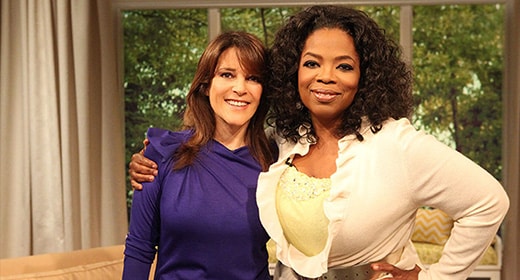 I remember sitting in my apartment in West Hollywood 20 years ago when I got a call from Oprah Winfrey. She was a huge star already, of course, but her book club had not yet begun, and in some ways our whole society was a bit more innocent. I was excited she called, and I enjoyed talking to her. But I had no idea she was about to change my life. A week later, she’d be telling her huge TV audience how much she loved my book, and that she’d bought 1,000 copies to give away. A Return to Love then became the fifth highest-selling book in America that year.

She was able to change my life because she had changed the lives of so many others first, people who believed her when she said something. I remember women coming up to me at book signings around the country saying, “Oprah told me to read this,” as though Oprah had personally called them and said, “You should read this book!” It was almost weird; I’d be thinking, “You do realize she wasn’t just talking to you, right?”

Now, 20 years later, I was once again on my way back to Chicago to be with Oprah on television talking about A Return to Love. Harpo sent me the video of the original show to look at before I went, and I marveled at everything. I marveled at how we all wore clothes back then that seemed to be two sizes too big. I marveled at the haircuts we had — myself, Oprah and particularly some of the people in the audience! And I marveled at how deeply we were all clearly yearning for a more spiritual approach to our lives.

Over time, the clothes have changed and the haircuts have changed, but the yearning in our hearts has not changed. All of us have experienced a lot in 20 years. But as my mother used to say, “Some things don’t change.” A Return to Love is my reflection on the principles in a set of books titled A Course in Miracles,and the Course is about truths that are eternal: how love is real, how forgiveness heals us and how there’s another way to live our lives than in fear and anger and suffering. Throughout time — 20 years from now, and even 20 years after that — spiritual truths will remain current and true. Future generations will find amazement and joy at the message they bring, and some, like Oprah and myself, will have the profound privilege of sharing the news.