by Micheal D’estries: Tracey and Jon Stewart’s dreams of opening a major animal rescue farm have just been given the green light… 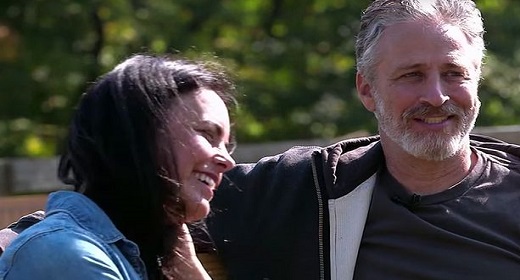 Earlier this week, the planning board for the township of Colts Neck, New Jersey, unanimously approved the Stewarts’ plan to repurpose an existing 45-acre farm into an animal rescue and education center. The application process, first started in April 2016, took longer than expected as the famous couple worked to address local residents’ concerns over noise and traffic.

“So much of the project is about community. So you want to the community that you are invested in to want you to be there and to be invested in it as well,” Jon Stewart said during the meeting Tuesday. “You want it to be mutual love, not unrequited love.”

An aerial view of the new 45-acre property that will soon be home to the Stewarts’ new animal rescue operation. (Photo: Zillow)

Tracey Stewart, an animal activist and best-selling author of “Do Unto Animals,” was thrilled with the vote of approval from the community.

“As of tonight, we can finally give people an idea of when we will open, which is 2018,” she said. “And we can really get to work now and start hiring people and start making this a reality.”

The Stewarts intend for the new 45-acre spread — which features a pond, six barns, five pastures and five paddocks — to be the public-facing operation of their original 12-acre Bufflehead Farm. In addition to providing refuge for abused animals from “slaughter houses, kill piles, live markets and roadsides,” the property will also grow 15 acres of sustainable feed crops, host tours and educational experiences for schools, and teach about animal care.

Tracey and Jon Stewart’s new animal rescue includes a beautiful five-bedroom manor built in 1777 that will serve as the farm’s HQ. (Photo: Zillow)

During an interview with the NY Times in October 2015, Tracey Stewart explained how the goal of her advocacy is encourage people to view animals less as food and more as individuals.

“If everyone did a bit more, if they fell in love a little bit more, so much could happen,” she said. “It doesn’t have to be going vegan. You can advocate for them. You can show tenderness. You can play music for them. I really hope people can connect with animals the way most of us did as children.”

A view of some of the outbuildings that will serve as homes for the dozens of rescue animals expected to reside at the farm. (Photo: Zillow)

Once the new public expansion of Bufflehead opens, it will become a major new division of Farm Sanctuary, the nation’s largest animal rescue and protection organization. According to documents filed last year, the new farm will employ as many as 15 to 20 caregivers, with four to six people living on the property permanently.