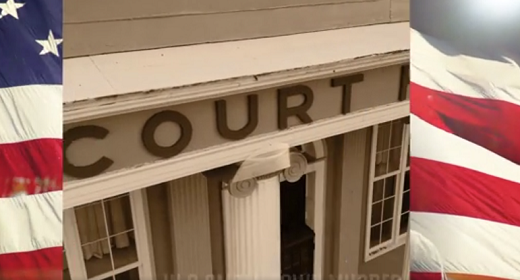 should be held accountable for climate crimes against humanity. They are the authors and agents of systematic policies that deny basic human rights to their own citizens and people around the world, including the rights to life, health, and property. These politicians have blood on their hands, and the death toll continues to rise.

Trump remains in willful denial of the thousands of deaths caused by his government’s inept, under-funded, and under-motivated response to Hurricane Maria in Puerto Rico in 2017. The image that will remain in history is of the President gleefully throwing paper towels for a photo op as the people of Puerto Rico around him suffered and died of neglect. In September, 2018 Hurricane Florence claimed at least 48 lives, with more likely to come in its aftermath. Last month, Hurricane Michael claimed at least 32 lives, with more than a thousand people reportedly still missing. The final death toll will likely soar in the months ahead as the residual consequences of the storm become more clear.

Yet Trump and his minions are the loyal servants of the fossil-fuel industry, which fill Republican party campaign coffers. Trump has also stalled the fight against climate change by pulling out of the Paris Agreement. The politicians thereby deprive the people of their lives and property out of profound cynicism, greed, and willful scientific ignorance.The first job of government is to protect the public.

Real protection requires climate action on several fronts: educating the public about the growing dire risks of human-induced climate change; enacting legislation and regulations to ensure that families and businesses are kept out of harm’s way, for example by stopping construction in flood plains, and investing in sustainable infrastructure to counteract rising sea levels; anticipating the rising frequency of high-intensity climate-related disasters through science-based preparedness following through on properly scaled disaster-response during and after storm events; and most importantly for the future, spearheading the rapid transition to zero-carbon energy to prevent much greater calamities in the years ahead.

This straightforward to-do list is the opposite of what Trump and his cronies are doing. Trump blithely disregards scientific findings about climate change and thereby exposes the nation to unprecedented risks. The officials he has appointed to the Environmental Protection Agency and other relevant parts of government are industry cronies and lobbyists far more interested in self-enrichment, padding their accounts, and helping their once-and-future employers than in doing their current jobs.

Trump’s mishandling of Puerto Rico disaster in the wake of Hurricane Maria is grounds itself for impeachment and trial. Thousands of citizens died unnecessarily on Trump’s watch because the administration could not be stirred to proper action before, during, and after the hurricane.

Two independent, detailed epidemiological studies, using different methodologies — one led by researchers at Harvard University and the other by researchers at George Washington University — have estimated that thousands died in the aftermath of Maria.
While dozens died during the storm, thousands more died as a result of the residual effects of the storm. Maria downed electricity and wreaked havoc on the ability of Puerto Ricans to meet their life-sustaining needs by disrupting access to health services, safe water, and transportation. They died, in short, from the storm, and ultimately from inadequate disaster prevention, preparedness and response.

Yet when the George Washington University study was released in September, 2018, the President responded by saying, “I think we did a fantastic job” in Puerto Rico. He brazenly denied the death count, without any attempt whatsoever to understand or learn from the findings.

Recent scientific studies underscore the dire emergency ahead. Professor James Hansen, one of the world’s leading climatologists, has demonstrated that the Earth’s climate has moved above the temperature range that supported the entire 10,000 years of civilization. The risks of catastrophic sea level rise are upon us.

A group of world-leading ecologists recently highlighted that critical Earth systems could spiral out of control. The Nobel-prize winning Inter-Governmental Panel on Climate Change released a harrowing report showing that the world has just a few years left to move decisively towards renewable energy if it hopes to achieve the globally agreed target to limit warming below 1.5 degrees Celsius above the pre-industrial average temperature of the planet.

The huge bills for Hurricanes Florence and Michael will now start rolling in: funerals, suffering, sorting through debris, and perhaps $30 billion in losses that could have been reduced dramatically through science-based planning and foresight. The American people are paying a heavy cost for the cynicism and cruelty of politicians in the pocket of the fossil-fuel industry. It is time to hold these reckless politicians to account.